My next featured map comes from my friend False Dmitri, a.k.a. Benkarnell. Not only is Ben an active member of AlternateHistory.com, but he is also a veteran editor of Ill Bethisad and the AltHistory Wiki. He can also make some spectacular maps, like his balkanized American ethnicities map that is the #2 most viewed article on The Update. Today, however, we are here to check out the Royal Province of Maryland: 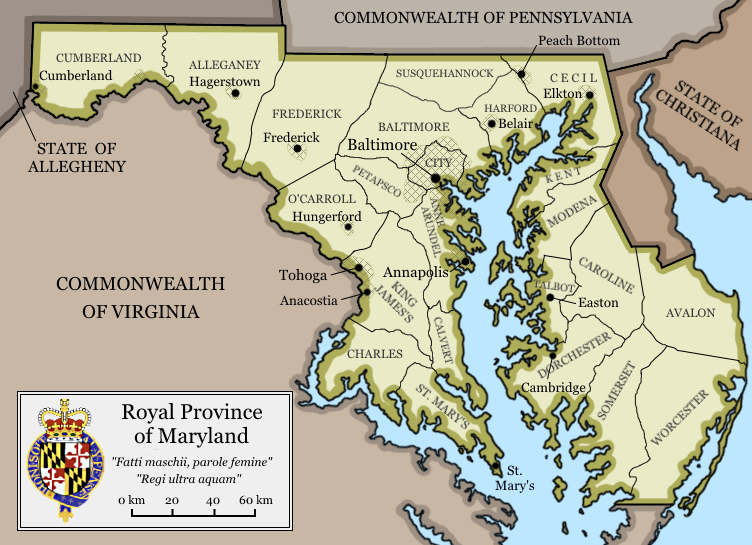 This map is set in his Affiliated States of Boreoamerica timelines.  It is a really unique timelines in the sense that it focuses primarily on the domestic histories of the member states of Boreoamerica and ignores the wars and geopolitical rivalries found in other timelines. The ASB (see what Ben did there) is a confederation of White and Indian states that arose out of a vastly different colonization of North America. Not only are there less British colonies, but the ones that do exist have vastly different identities than their doppelgangers of OTL.

Take Maryland, for example. Not only do we learn how the colonies gained their independence during the a Revolution that was not quite Glorious, but we see how this colony of English Catholics transformed into a Jacobite state where the current claimant rules from afar while the Baron Baltimore is the de facto monarch. Ben has managed to give this alternate Maryland a unique identity not seen in most balkanized North America through his history and from the tiny changes he has made in the map above.

Honorable mention this week goes to rvbomally's "Putsch", which features a three-way Cold War between the capitalists, communists and an alliance of fascist states led by Italy. If you want to submit a map for the next Map Monday, email me at ahwupdate at gmail dot com with your map attached and a brief description in the body of the email.