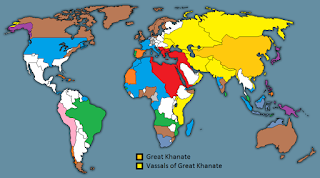 I felt inspired to write a scenario for SciFi Ideas' alternate history map challenge they ran last week, so here is the scenario I came up with:

Ögedei Khan doesn't drink himself to death in 1241, thus Batu Kahn continues to drive west into Europe. He eventually reaches the Pyrenees before news of Ögedei's death (caused by what historians would refer to as a "crazy bender of a weekend") causes him to turn around and return to Karakorum to elect a new khan. Now in the late 19th century (by the European reckoning) the Great Khanate of China, ruled by the Yaun Dynasty, may not be the world empire Genghis Khan had originally envisioned, but it has come pretty damn close. China is one of the world's largest states with its western border reaching the shores of the Caspian Sea and has vassals and colonies on Asia, Africa, Europe and even North America [1] (where people who really screw up go, but not bad enough to be executed). When it comes to the Great Khanate, the key word is "biggest". It has the biggest army, the biggest navy, the biggest population, etc. Of course, in this timeline, bigger doesn't always mean better.

Case in point: the Khanate of Rome. Once it was the Great Khanate's most western vassal, but in the last century and a half it has become its greatest rival. Rome's strength comes from trade with its colonies. The jewel in the Roman crown has to be Batustan where the Roman's alliance with the Lakota (who took to horses like ducks to water) helped carve out an expansive empire over the Great Plains. They have also rallied the Dutch and German khanates to their side, minor nations to be sure, but they can easily provide the extra soldiers and ships necessary to slay the Great Khanate dragon if when Rome decides the time is right to strike.

There are, of course, other powers to be concerned about. The Byzantine Empire gained an unexpected boon thanks to all of the European nobles, soldiers and artisans that fled to their lands following the Mongol invasion. This influx of people desperate for land were useful in driving back the Arabs, Turks, Egyptians, Persians and even the Mongols, giving the Byzantines control over much of the Middle East and northeast Africa. They have no love for the Romans (How dare they call themselves Romans! We are the real Romans!), but they see the Mongols as a greater threat and with their Serbian and Bulgarian vassals, could be willing to challenge the Great Khanate's hold over Asia.

Then we have the Great Northern Empire [2]. Also known as the "Nordic Realm", it was founded after an ambitious Norwegian king united the British Isles with Scandinavia. They are Rome's greatest imperial rival and there have been several colonial wars fought between them over the centuries. They rely on their strong navy rather than a large army, but they are known to be fierce fighters should a land battle be necessary. Their relations with two great powers is switched. Although they distrust the Great Khanate, they fought less wars with them than the Khanate of Rome. If push came to shove, they may find themselves fighting for the Great Khan if war ever broke out between the Khanates.

Other states include Spain and Portugal, which were some of the few European states to avoid being ravaged by Mongol invaders. They don't want any trouble and prefer to be left alone to trade and exploit their own colonies in peace. The same can't be said about Japan. Although they suffered through several failed Mongol invasions, they have proved a nuisance to the Europeans as well for constantly trying to snatch their colonies away from them. Incredibly militaristic and determined to create their own empire, no one likes the Japanese, not even Siam, the only other major state in East Asia not part of the Great Khanate. The Japanese instead must sit patiently and wait for their opportunity to snap up as much as they can before the rest of the powers can react.

Because the Mongol invasion delayed European imperialism and the Great Khanate was never that excited about oversea colonies (East Africa being one of the few exceptions [3]) many more native states in Africa and the Americas exist and are strong enough to avoid foreign occupation. The Incas are perhaps the most powerful in this category and are also one of the few willing allies of the Great Khanate. The Incas find the Chinese preferable to the Europeans since they don't seem to have much interest in raping their women and stealing their gold.

Technologically this world is a century behind ours, being more at the level Napoleon would recognize. Culturally things are all over the map. Islam is weak in the Middle East, but strong in Eastern Europe, with large pockets of Nestorian Christianity and Buddhism throughout the Great Khanate and their vassals. Their are two Popes, one in Rome and one in Canterbury, and a nation's allegiance to one usually depends on the politics of the day. Coptic Christians have a plurality in Egypt, but Muslim missionaries have had great success in Mexica. The Great Khanate's East African colonies have enjoyed the "benign indifference" of the Great Khan which has allowed them to pursue their own goals (which is usually making as much money as possible). Their cities are full of people speaking a dozen different tongues and even a couple new ones that merge the vocabulary and dialect of the different cultures. There has been talk in quiet corners of this realm about going their own way someday and creating a "United States of Africa" (or a "USA" if you will).

The outlook for peace is pretty dim in this timeline. The current Great Khan parties so hard he makes Ögedei Khan look like a teetotaler. The old nobility, disgusted by the Great Khan, want to quietly depose him and put someone more amenable to them on the throne. The new class of young nobles, supported by the growing middle class, just want a Great Khan, not necessarily the one currently on the throne mind you, who can finally fulfill Genghis Khan's dream of conquering the world. The Great Khan, however, is not without his supporters, mostly from the rich and powerful in the vassal states who prefer a do nothing Khan to the alternative. As the factions in the Great Khanate vie for supremacy, Rome senses weakness and prepares for war, while the neighbors of both empires ponder just what side to take (if any) in the conflict to come...

[1]: Neither continent is called North America or South America in this timeline, but because I am too lazy to think of a better name, I am going to stick with their names from our timeline as placeholders.

[2]: Some would argue the Great Northern Empire is neither "Great" nor an "Empire" since the different constituent parts fight amongst themselves or are rebelling against the High King so often that the Empire always seems to be on the verge of falling apart. Also since a good chunk is located in the Southern Hemisphere, you can't even really call it "Northern" anymore either, but hey, old habits die hard.

[3]: The surge of European refugees and Byzantine expansion led to an exodus of Muslims, Jews and Eastern Christians (who didn't listen to the Patriarch of Constantinople) to East Africa, where Middle Easterners had already been trading there for centuries. When the Europeans began encroaching on their territory and trade, they turned to the Great Khan for protection. This was a decision they would later regret after a flood of new immigrants came in from East Asia and other parts of the Great Khanate. It didn't help matters that the local Africans found all these new neighbors rather unpleasant as well. Things were dicey in the early years, but now there is a tenuous peace and much mixing of cultures and peoples. A booming economy doesn't hurt either.