Since I missed Map Monday last week, I'm going to feature two maps this Monday. Luckily they are both from the same universe so it makes it easier to talk about them. Let's begin, shall we: 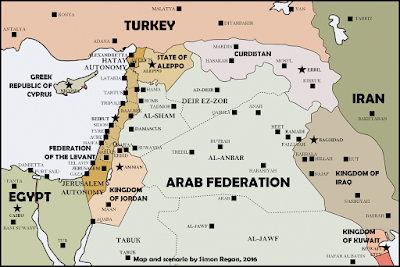 This is "Greater Lebanon" by Simon Regan. In this timeline the Ottoman Empire is carved up differently in a way that favors the Arabs. A "Federation of the Levant", however, was created as a counterweight and a home for the minorities living along the Mediterranean coast. We can also see a Jewish state in southern Palestine, an independent Kurdistan (or "Curdistan") and a Kingdom of Iraq in the Shia majority areas.

First up, I love maps focusing on a different division to the Middle East. Second, this map is well done. Soft colors, realistic borders and lots of details; pretty much everything I look for in a map. Regan gets a lot of praise in the community as an alternate cartographer and this map confirms his position as one of the best. Hold on, there is still another map to look at: 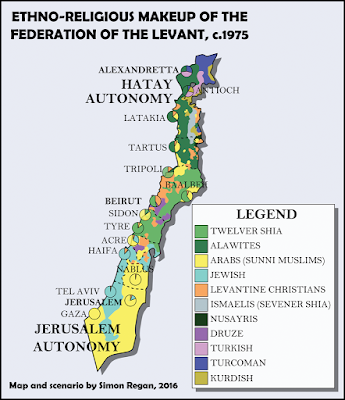 This is an ethnicity map of the Federation of the Levant, also done by Regan. As you can see the Levant is a multicultural place, hence why they probably need to be a federation. Trying to get all of these ethnic and religious groups to work together must be like trying to herd jet pack wearing cats, but somehow they make it work. Anywho, this is another nice map for all of the same reasons mentioned above. I really do need to feature more of Regan's work.

Honorable mentions this week goes out to "A Totally Random Map" by Martin23230, "Dixie-2" by Rvbomally, "Rome Eternal 1.0" by Bruce Munro, "If Hokkaido was an independent country" by Pavelzuk, "Iksander-1" by Rebecca Stirling, "Alexander's World​" by Zek Sora and "Balkanized North America Tribute" by 22iron thunder.