What if Wednesday: Napoleon is Victorious at Waterloo 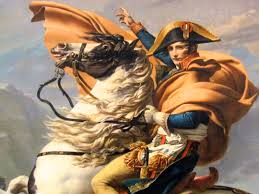 With tomorrow marking the 200th year anniversary of the Battle of Waterloo, expect to see a lot of content this week regarding Napoleon from many sources, including counterfactuals about what would happen if he was victorious. In fact the speculation has already begun. For example, Phillipp Saure posted an article on Yahoo! where historian Helmut Stubbe da Luz suggested that if Napoleon won the Battle of Waterloo, he would have reconquered Europe and extended his empire to China. This massive French Empire would be an enlightened dictatorship that would prevent the worlds wars or the rise of Nazism.

Now I freely admit there are many people out there who are brighter and know a lot more about Napoleonic history than me, but Helmut's scenario sounds amazingly optimistic. I find it hard to believe that the rest of Europe would after being defeated in a single battle just shrug their shoulders and say: "Well I guess we all have to speak French now". Remember this battle was fought not when Napoleon was at his height, but when he had just returned from his exile and was trying to regain what he had lost. Even if he had been victorious at Waterloo, there would still be a long campaign through Germany and the rest of Europe, giving his enemies time to recover from their defeat and try again. Plus the Royal Navy wouldn't disappear if Wellington was defeated and I am sure they will have something to say if Napoleon tried to conquer China.

At best a victory at Waterloo would hurt the resolve of the Seventh Coalition to continue the war. A negotiated peace recognizes Napoleon as the ruler of France and gives him some influence over neighboring countries. It is foreseeable he would build up his forces to try and conquer Europe again, but with his OTL death just a few years away, it is unlikely that would ever happen. Napoleon II would thus succeed his father and while it is difficult to speculate on what he would be like as a ruler, it is possible he wouldn't immediately set off to bring all of Europe under the French heel, especially when there are easier and more valuable targets in Africa, Asia and the Americas.

As time goes by it would become increasingly difficult to imagine how European history would change. What would future Bonaparte rulers be like? Would France evolve into a constitutional monarchy like Britain or would the Bonapartes be overthrown in a violent revolution like what happened in Russia? At this point it is pretty much open to your imagination. Let me know what you think in the comments below.

The great thing about Napoleon is that there are a lot of potential PODs out there besides a victory at Waterloo. For example, maybe he adopted steam technology for his navy and created a steampunk alternate history where everyone spoke French instead of English. Here at The Update, we have featured a lot of alternate Napoleon histories including Napoleon conquering England with zombies, veterans of the Grand Army carving out an independent state in Louisiana, Napoleon fleeing from his exile on St. Helena and settling in America and Napoleon using the knowledge gained from his adventure while time travelling to finally conquer Europe once and for all. Go check them out and tell us what you think.

Email ThisBlogThis!Share to TwitterShare to FacebookShare to Pinterest
Labels: Napoleon, Waterloo, What If Wednesday