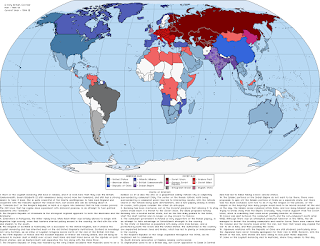 The scenario follows the point of divergence of the wargame. King Edward VIII refuses the abdicate, touching off a civil war. Hitler becomes over confident, thinking things will be easier without the British Empire to worry about and starts World War II a tad earlier by invading Czechoslovakia. As you can guess things don't go as planned for our least favorite German Chancellor and most of Europe comes under Soviet domination. The free world is still led by the United States, buts its main allies appear to be India and China in this timeline. Meanwhile, the Soviet Union traded their short lived alliance with the Chinese Communists in OTL to make greater inroads in Europe and Africa.

I like to point out that this map is set in 1984 and considering that rump England is a fascist state simply called the "English State" you can probably guess which classic work of dystopic fiction Rvbomally is referencing. In fact that Orwellian nightmare future has been a big inspiration for a lot of Rvbomally works, but for this one he is using the popular fan theory that Britain is a North Korea-esque state, while the rest of the world is fine. Of course, we have seen that before, but I still enjoyed this take on it.

Honorable mentions this week go out to Cody Franklin of Alternate History Hub's Alternate Countries Week 1 and Mark Ball of Sci Fi Ideas' AltMap: Holy Romans Batman! If you want to submit a map for the next Map Monday, email me at ahwupdate at gmail dot com with your map attached and a brief description in the body of the email.