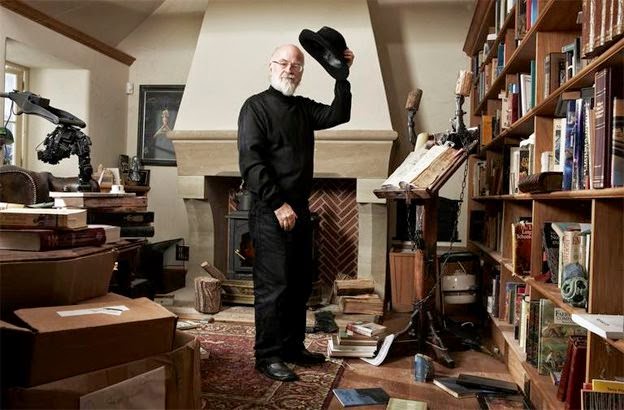 It is with a heavy heart that I must announce the death of Terry Prachett. Sir Terence David John "Terry" Pratchett was an author and satirist probably best known for his Discworld fantasy series, which has sold over 80 millions copies in 37 languages. He announced in 2007 that he was suffering from early-onset Alzheimer's disease and his passing was reported today by the BBC and numerous SF sites.

According to Uchronia, Pratchett's entrance into alternate history came rather late in his career when he published The Long Earth series with co-author Stephen Baxter. The series was a unique take on the multiverse since instead of an infinite series of parallel Earths with alternate human histories, we were instead presented with Earths that had alternate geological and climate histories and lightly populated by primitive humanoids. The series highlighted Pratchett's fantasy and Baxter's hard SF backgrounds rather well and you can check out my review of the first two novels over at Amazing Stories.

Sadly I have not read The Long Mars yet, but I hope to complete the series in the next few weeks. The Internet is full of people pouring out their grief for the loss of Terry Pratchett and I only wish that I could read more of his works before he died. My prayers go out to Terry's family, friends and fans, and it is my sincere wish that his influence will be felt on all the generations to come.