Clash of Eagles by Alan Smale

Perfect for fans of action-adventure and historical fiction—including novels by such authors as Bernard Cornwell, Steve Berry, Naomi Novik, and Harry Turtledove—this stunning work of alternate history imagines a world in which the Roman Empire has not fallen and the North American continent has just been discovered. In the year 1218 AD, transported by Norse longboats, a Roman legion crosses the great ocean, enters an endless wilderness, and faces a cataclysmic clash of worlds, cultures, and warriors.

Ever hungry for land and gold, the Emperor has sent Praetor Gaius Marcellinus and the 33rd Roman Legion into the newly discovered lands of North America. Marcellinus and his men expect easy victory over the native inhabitants, but on the shores of a vast river the Legion clashes with a unique civilization armed with weapons and strategies no Roman has ever imagined.

Forced to watch his vaunted force massacred by a surprisingly tenacious enemy, Marcellinus is spared by his captors and kept alive for his military knowledge. As he recovers and learns more about these proud people, he can’t help but be drawn into their society, forming an uneasy friendship with the denizens of the city-state of Cahokia. But threats—both Roman and Native—promise to assail his newfound kin, and Marcellinus will struggle to keep the peace while the rest of the continent surges toward certain conflict.

Past Futures: Science Fiction, Space Travel, and Postwar Art of the Americas by Sarah J. Montross 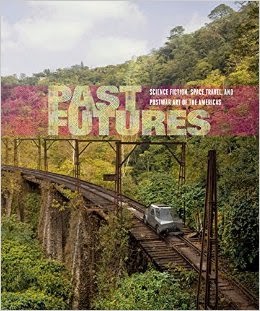 From the 1940s to the 1970s, visionary artists from across the Americas reimagined themes from science fiction and space travel. They mapped extraterrestrial terrain, created dystopian scenarios amid fears of nuclear annihilation, and ingeniously deployed scientific and technological subjects and motifs. This book offers a sumptuously illustrated exploration of how artists from the United States and Latin America visualized the future. Inspired variously by the "golden age" of science fiction, the Cold War, the space race, and the counterculture, these artists expressed both optimism and pessimism about humanity's prospects.

Past Futures showcases work by more than a dozen artists, including the biomorphic cosmic spaces and hybrid alien-totemic figures painted by the Chilean artist Roberto Matta (1911--2002); the utopian Hydrospatial City envisioned by Argentine Gyula Kosice (1924--); and Incidents of Mirror-Travel in the Yucatan, in which Robert Smithson (1938--1973) layered tropes of time travel atop Mayan ruins. The artists respond to science fiction in film and literature and the media coverage of the space race; link myths of Europeans' first encounters with the New World to contemporary space exploration; and project futures both idealized and dystopian.

The book, which accompanies an exhibition at the Bowdoin College Museum of Art, also includes an essay by the editor and curator mapping central themes; an exploration of how Latin American artists have depicted astronomic phenomena, utopian projects, and the modern machine; an essay on space-age art in Argentina during the 1960s; and a study of Smithson and science fiction.

Introducing the Custard Protocol series, in which Alexia Maccon's daughter Prudence travels to India on behalf of Queen, country...and the perfect pot of tea.

When Prudence Alessandra Maccon Akeldama ("Rue" to her friends) is bequeathed an unexpected dirigible, she does what any sensible female under similar circumstances would do -- she christens it the Spotted Custard and floats off to India.

Soon, she stumbles upon a plot involving local dissidents, a kidnapped brigadier's wife, and some awfully familiar Scottish werewolves. Faced with a dire crisis (and an embarrassing lack of bloomers), Rue must rely on her good breeding -- and her metanatural abilities -- to get to the bottom of it all...

Perilous Journey of the Not-So-Innocuous Girl by Leigh Statham

Lady Marguerite lives a life most 17th century French girls can only dream of: Money, designer dresses, suitors and a secure future. Except, she suspects her heart may be falling for her best friend Claude, a common smithie in the family's steam forge. When Claude leaves for New France in search of a better life, Marguerite decides to follow him and test her suspicions of love. Only the trip proves to be more harrowing than she anticipated. Love, adventure and restitution await her, if she can survive the voyage.

Metal Emissary by Chris Paton
Struggling to regain the Queen’s favour, the British Royal Navy despatch Lieutenant Jamie Hanover on a mission to uncover the rumour of a French secret weapon located in the mountains of Afghanistan.

As the Great Game takes shape in Central Asia, Jamie is helped by the strange mystic, Hari Singh, as he tracks a metal monster leaving a trail of destruction and chaos in its wake. The two men join forces to fulfil their respective missions. Ambushed in the mountains, they fight side by side as they travel through the infamous Khyber Pass.

Following in the destructive footsteps of the metal emissary, Jamie and Hari’s journey takes them from Peshawar to Adina Pur where the uncovering of secrets and the culmination of their mission demands a heavy price.

Metal Emissary is a Steampunk Adventure set in Central Asia in the 1850s full of weird machines, exotic characters, dust, snow and blood.