Preview: Murder on the Orient Elite: A Tale of the Grimnoir Chronicles by Larry Correia 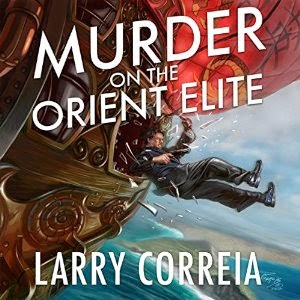 Doing something a little different this time. I will be reviewing Murder on the Orient Elite: A Tale of the Grimnoir Chronicles by Larry Correia, an audiobook given to me by the good people at Audible. Here is the description:

In this brand-new Grimnoir Chronicles story written exclusively for Audible, it's 1937 - four years after the Grimnoir Society defeated the magical alien force known as The Power. "Heavy" Jake Sullivan is summoned by his oddest ally, Dr. Wells, to stop the bombing of a new ultra-luxury airship. Amid the glitz, the gambling, and the high-society types, Sullivan races time to hunt for the saboteur. But surrounded by a blimp-full of Germans, Russians, Imperium Iron Guard, and other magical enemies - where can he even begin?

Its currently free on Audible, so you can listen along with me. That being said, I am not exactly a fan of audiobooks since I prefer to hold a book (or an e-reader) in my hands. Nevertheless, I am always willing to try new things, so stay tuned for my review.