With the permission of Sam McDonald and Jordan Harbour, the voice behind Twilight Histories, I present this new map and description made by Sam. It was inspired by the "Aztec Steel" episode of Twilight Histories. Enjoy! 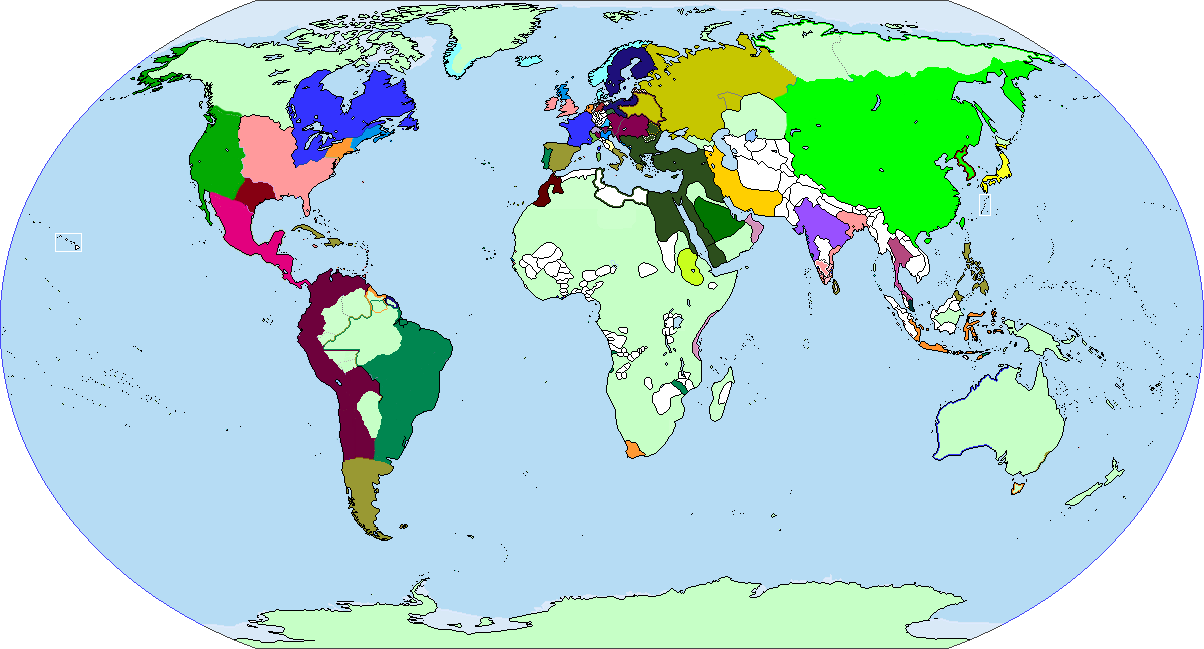 After the sack of Tenochtitlan, Chinese hegemony was established and a new era of Sino-Aztec cooperation and rebuilding was born. The wealth brought by China's New World possessions, combined with a more outwardly thinking dynasty, meant that China was considered by many nations in the West to be the most powerful nation on earth.

China also made contact with the Incan Empire. The Inca fell into a civil war after the Old World diseases set in. The civil war was between those who wished to continue trade with China and those who wanted the foreigners out of their land. Eventually the Pro-Chinese faction won out. The Chinese began establishing colonies on Incan land to help make up for the depleted workforce.

China's colonies became autonomous regions within the Chinese sphere. This wasn't caused by any ill-will towards China, but rather because nominal self-governance was a more efficient form of managing distant lands. The former colonies still retained close relations and trade with China. Originally, the former colonies Xuya [1] and Mexica comprised a single province. The two, however, ultimately split over ethnic tensions due to Xuya being more pure Han Chinese, while Mexica was a mix of Aztec and Chinese culture. Tawantinsuyu, China's former Incan colony was a mix of Chinese and Incan culture.

Xuya modeled itself closely off of China's government where anyone was free to join if they passed the imperial exams. Mexica and Tawantinsuyu modeled themselves off of traditional Aztec and Incan government respectively, but certain Chinese elements such as imperial exams and increased bureaucracy persisted. Other progressive social developments were seen in the autonomous regions including the banning of human sacrifices and women being allowed to participate in the imperial exams.

Korea never established a colony in the New World. However, many Koreans made it to the New World through China's autonomous zones. Today, Koreans make up a noticeable minority in Xuya, Mexica and Tawantinsuyu.

The tiny nation of Tecas, made of an eclectic mix of Chinese, Korean, Aztec and English settlers. The Tecas were a threat to the larger autonomous zones because they practiced a form of direct democracy.

The Spanish established colonies in Cuba, Hispaniola and Puerto Rico. However, lacking direct access to Aztec and Incan gold and silver meant that Spain never became a great empire. Spain focused more on European affairs while at the same time putting more effort into the colonization of the Philippines. Spain also settled the Patagonia region of South America, to the consternation of the Chinese, and placed more emphasis on trade and commerce rather than conquest. This economic strategy proved more sustainable for Spain in the long run, and it remained a major power in Europe.

England established its first colony, Henrytown, in what would have been Louisiana. It was close to the Chinese-Aztec autonomous regions, which was good for trade, yet far enough away as to not pose a threat. England became the primary European trading partner for these regions. Despite the fact that half the colonist died in the first year due to malaria, the colony was a success. The English slowly expanded around the gulf coast with colonies called Chesapeake Bay and Plymouth. English settlers encroached on the edges of the French Ohio River Valley where tensions rose.

Scotland also established trade with the Chinese-Aztecs. The English remained the Aztecs’ primary trading partner for arms and armor, but the Scottish traded something equally valuable: whisky. The economics benefits of trading with the Chinese-Aztecs meant that Scotland didn't have to merge with England and remained an independent state. Scotland focused on colonizing Nova Scotia and what would have been New Brunswick and New England. Their colony's northern half was known as Nova Scotia, while the southern half was called Massachusetts.

France filled the power vacuum caused by Spain's lack of an empire. Eager to keep their spot on top, the French made colonizing the New World a priority. They colonized Canada and the Ohio River Valley, and the denser population of colonists allowed France to retain its lands. New France tended to be more laid back about religion than its mother nation.

The New Netherlands continued to survive and thrive despite occasional border clashes with the Scottish colonies. About half their population was Dutch, while the other half comprised of various foreigners. Meanwhile, Portugal colonized Brazil.

[1]: Xuya, the name of one of China's former colonies, was originally a place holder I had until I could come up with something better, but as I worked on the map the name stuck with me so I kept it.  The name itself roughly translates as Dawn Shore, and I got it from Alliette De Bodard's series of alternate history short stories, collectively known as the Xuya Stories, which have a similar premise of China discovering the New World and the Aztec Empire surviving.

This article was written by Sam McDonald and edited by Jordan Harbour. It first appeared on the Twilight Histories Facebook page.