1636: The Viennese Waltz by by Eric Flint, Gorg Huff and Paula Goodlett

Book #18 in the multiple New York Times best-selling Ring of Fire series, and the team behind national bestseller 1635: The Kremlin Games. After carving a free state for itself in war-torn 17th century Europe, citizens of the modern town of Grantville, West Virginia contend with aristocratic forces determined to keep their grip on power whatever it takes.

When Grantville, West Virginia was transported back to the year 1631 -- in the middle of the Thirty Years' War, no less -- many things happened. Many opportunities arose. It's said that a rising tide lifts all boats. Perhaps not quite as high as the Barbie Consortium rose, however.

A cabal of ten- to twelve-year-old girls?

They aren't twelve anymore. And they gave up playing with dolls some years ago, when they sold them all and started an investment consortium. A consortium that did quite well.

The Barbie Consortium hits Vienna. In several different ways. The princes and princesses, dukes and duchesses, the common men and women on the street have no idea what's about to happen.Neither do the girls, but they're determined it'll happen their way.

Recollections of one of the grand masters of science fiction, on his storied career as a celebrated author and on his relationships with other luminaries in the field. This memoir is filled with all the humor and irreverence Harry Harrison's readers have come to expect from the New York Times bestselling author of the uproarious Stainless Steel Rat series. This also includes black and white photos spanning his sixty-year career.

Decades after an alien virus changed the course of history, the surviving population of Manhattan still struggles to understand the new world left in its wake. Natural humans share the rough city with those given extraordinary—and sometimes terrifying—traits. While most manage to coexist in an uneasy peace, not everyone is willing to adapt. Down in the seedy underbelly of Jokertown, residents are going missing. The authorities are unwilling to investigate, except for a fresh lieutenant looking to prove himself and a collection of unlikely jokers forced to take matters into their own hands—or tentacles. The deeper into the kidnapping case these misfits and miscreants get, the higher the stakes are raised.

Perfect for old fans and new readers alike, Lowball delves deeper into the world of aces, jokers, and the hard-boiled men and women of the Fort Freak police precinct in a pulpy, page-turning novel of superheroics and mystery.

Over the Top: Alternate Histories of the First World War edited by Peter Tsouras and Spencer Jones

Although separated from the modern reader by a full century, the First World War continues to generate controversy and interest as the great event upon which modern history pivoted. Not only did the war cull the European peoples of some of their best and brightest, it also led to the destruction of the Austro-Hungarian, German, Ottoman and Russian empires, and paved the way for the Second World War. This thought-provoking book explores ten alternate scenarios in which the course of the war is changed forever. How would the war have changed had the Germans not attacked France but turned their main thrust against Russia; had the Greeks joined the allies at Gallipoli; or had the British severed the communications of the Ottoman Empire at Alexandretta? What if there was a more decisive outcome at Jutland; if the alternative plans for the Battle of the Somme in 1916 had been put into effect; or if the Americans intervened in 1915, rather 1917? Expertly written by leading military historians, this is a compelling and credible look at what might have been. 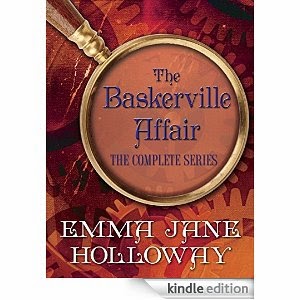 Evelina Cooper, the niece of the great Sherlock Holmes, is the unforgettable heroine of the Baskerville Affair series, a rollicking trilogy blending paranormal fantasy, romance, and mystery. Reimagining Victorian London as the battleground between magic and machine, Emma Jane Holloway captures the city in stunning detail, from 221B Baker Street to the hunting grounds of Jack the Ripper. Now this eBook bundle brings together all three captivating novels:

A STUDY IN SILKS
A STUDY IN DARKNESS
A STUDY IN ASHES
Also includes prequel short stories for all three novels: “The Adventure of the Wollaston Ritual,” “The Strange and Alarming Courtship of Miss Imogen Roth,” and “The Steamspinner Mutiny”!

In a Victorian era ruled by a council of ruthless steam barons, mechanical power is the real monarch and sorcery the demon enemy of the Empire. Nevertheless, the most coveted weapon is magic that can run machines—something Evelina Cooper has secretly mastered. But rather than making her fortune, her special talents could mean death or an eternity as a guest at Her Majesty’s secret laboratories. What’s a polite young lady—poised to enjoy her first Season in London Society—to do but mind her manners and pray she’s never found out?

But first there’s a murder to deal with—not to mention missing automatons, a sorcerer, and a talking mouse. As Sherlock Holmes’s niece, Evelina should be able to find the answers, but she has a lot to learn. And the first decision she has to make is whether to trust the handsome, clever rake who makes her breath come faster or the dashing trick rider who would dare anything for her if she would only just ask.

The Baskerville Tales: The Adventure of the Wollaston Ritual, The Strange and Alarming Courtship of Miss Imogen Roth, The Steamspinner Mutiny by Emma Jane Holloway 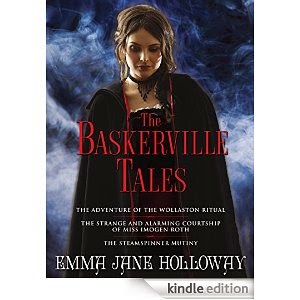 These three short stories return us to the world of Emma Jane Holloway’s delightful novels featuring Evelina Cooper, the niece of the great Sherlock Holmes. Together they expand the bounds of Holloway’s irresistible vision of Victorian London, which has enchanted readers with a seamless mix of paranormal fantasy, romance, and mystery. Now this trilogy of prequels is available in one convenient eBook bundle:

THE STEAMSPINNER MUTINY
Prequel to A Study in Ashes

In a Victorian era ruled by a council of ruthless steam barons, mechanical power is the real monarch and sorcery the demon enemy of the Empire. Nevertheless, the most coveted weapon is magic that can run machines—something Evelina Cooper has secretly mastered. But rather than making her fortune, her special talents could mean death or an eternity as a guest at Her Majesty’s secret laboratories. What’s a polite young lady to do but mind her manners and pray she’s never found out? But first there’s murder and mayhem to deal with.

Swords from the West by Harold Lamb

Beset by enemies on every side and torn by internal divisions, the crusader kingdoms were a hotbed of intrigue, where your greatest ally might be your natural enemy. Because lives and kingdoms often rested on the edge of a sword blade, it was a time when a bold heart and a steady hand would see you far—so long as you watched your back.

Here, for the first time, are all seventeen of Harold Lamb’s uncollected crusader stories in one volume. Read now of the fall of kingdoms and the fate of doomed men, of desperate battles and brave comrades, of shrewd maids and scheming nobles. Join Nial O’Gordon, a young crusader riding deep into Asia to forget his past. Venture forth with Sir Robert of Antioch to cross blades with the Mongol hordes. Join King Richard the Lionhearted for his last battle. Stand firm beside Sir John and his Arab friend Khalil against a band of traitors. And sail out with Michael Bearn on a mission of vengeance, as he risks his life to bring down a sultan and his kingdom.

War of the Worlds: Goliath by Adam J. Whitlatch

In this official novel for the movie, War of the Worlds: Goliath, it’s 1914, fifteen years after the first invasion from Mars. On the eve of World War I, the Martians stage a second attack, stronger and more powerful than before, to finish what they started.

But this time, they meet a very different Earth, rebuilt using technologies left behind to create a wild and unsettling steampunk landscape.

And this time, we fight back.

With new scenes and character backgrounds not found in the action-packed film by Tripod Entertainment, this novel is the perfect companion piece for fans of both the movie and the original sci-fi classic.

Paradox Development Studios ups the stakes with the latest and third expansion from Europa Universalis IV – The Art of War. Centered on the 30 Years War and bubbling political instability between church and state, this expansion features improved gameplay mechanics that’s puts warfare at the forefront of your quest for domination and triumph.

Improved naval combat and full army control means the course of victory rests solely on your shoulders. Will you choose to triumph alone or rely on the combat strengths of your allies? Your decision will decide if your empire lasts through the ages.

Matt Mitrovich is the founder and editor of Alternate History Weekly Update and a blogger on Amazing Stories. Check out his short fiction. When not writing he works as an attorney, enjoys life with his beautiful wife Alana and prepares for the inevitable zombie apocalypse. You can follow him on Facebook or Twitter.
Posted by Mitro at 9:20 AM