The Martians Are Coming: War of the Worlds: Goliath Novelization Out Tomorrow 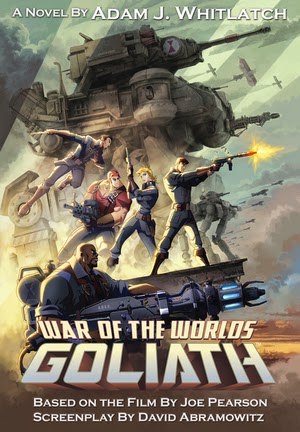 SF author Adam J. Whitlatch will debut his new novel War of the Worlds: Goliath tomorrow on October 30. Retro Rocket Press, who also published Whitlatch's debut novel The Weller, will release the book in multiple digital formats. The book, which is a novelization of the animated film of the same name (see my review on Amazing Stories), serves as a sequel to the H.G. Wells classic.

Here is the description from the press release:

On the eve of World War I, the Martians have returned to finish what they started fifteen years ago, but this time humanity is ready. Armed with steam-powered battle machines created from reverse-engineered alien technology, the global defense force A.R.E.S. prepares for the coming conflict as tensions rise in Europe. Captain Eric Wells, an orphan of the first War of the Worlds, commands Earth's newest, most formidable weapon the colossal battle tripod Goliath.

The novelization features deleted scenes, expanded character backgrounds, and all-new material that goes beyond the film.

The film's director Joe Pearson called Whitlatch's novelization "pulpy and visceral" and went on to say that "[the novel] goes way beyond the perfunctory retelling of the source movie that is often the case in many film novelizations. [It] stands on its own as a ripping good story and epic tale of the alternate history world of the film."

Whitlatch, a fan of War of the Worlds since first hearing the infamous Orson Welles radio broadcast as a boy, jumped at the opportunity to work with Pearson and his colleagues at Tripod Entertainment in Malaysia, immersing himself in the source material. "It was unlike anything I've ever written before," he said. "It felt very much like playing with someone else's toys in their sandbox, but I made it my own while keeping Joe's vision intact."

Well I can honestly say I enjoyed the movie so hopefully the novelization will be just as good. If you get a chance to read it, let us know.

Matt Mitrovich is the founder and editor of Alternate History Weekly Update and a blogger on Amazing Stories. Check out his short fiction. When not writing he works as an attorney, enjoys life with his beautiful wife Alana and prepares for the inevitable zombie apocalypse. You can follow him on Facebook or Twitter.
Posted by Mitro at 2:17 PM