As my research on alternate history fandom continued, one name kept cropping up in my searches: Christopher M. Cevasco. Chris was the editor of Paradox, a magazine for historical themed fiction, including alternate history. Thinking it would be remiss not to talk to Chris, I shot him an email and here is what I learned:

Who is Christopher M. Cevasco? 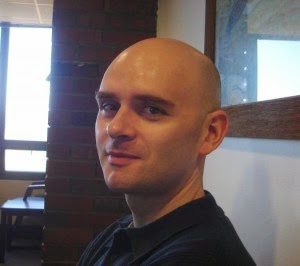 I’m a writer, primarily of historical fiction. The vast majority of what I write is set in late Anglo-Saxon England, but I've also written about Roman Britain, the American Civil War, the 14th-century Black Death, Viking-Era Orkney, and a variety of other times and places. I've also written some fantasy and science fiction. Most of what I write tends to be rather dark in tone. I've had stories published in such venues as Nightmare Magazine, Black Static, and the Prime Books anthologies Shades of Blue and Gray: Ghosts of the Civil War and Zombies: Shambling Through the Ages.

I've been a big history buff for as long as I can remember--since childhood--and I think it’s only natural that we ask ourselves how history might have turned out differently. I’m not sure that there’s any one moment or experience I can point to that sparked my interest in alternate history. But the more I started to realize how even seemingly tiny changes in the way historical events played out could have resulted in vastly different timelines, the more my interest in alternate history grew. I’m sure the fact that I look at history through a writer’s eyes helped stoke this fire, but even among purely scholarly historians, there is a long tradition of posing counterfactuals as a way of deepening our understanding of why and how history played out the way it did.

What was Paradox: The Magazine of Historical and Speculative Fiction?

Paradox was a print magazine that published original short historical fiction in all its forms. This included mainstream historical fiction as well as works of alternate history, historical mysteries, historical fantasy and horror, time travel, Arthurian tales and retold myths. The magazine also featured historically-themed poetry, reviews of historical novels and films, and interviews with notable historical novelists. I launched the magazine in 2003 and published thirteen issues through 2009. During that time, two stories published in Paradox were finalists for the Sidewise Award for Alternate History, one story was recommended for a Nebula Award, and one story won the 2008 WSFA Small Press Award, presented annually by the Washington Science Fiction Association.

What inspired you to create Paradox? 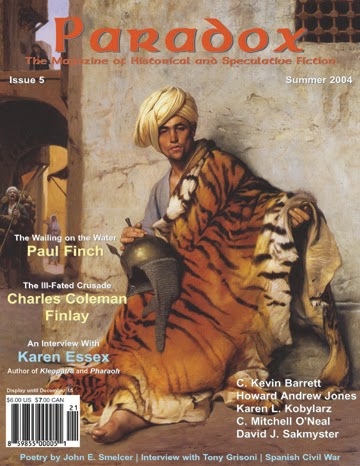 My primary motivation was a perception that there was a gap in the short fiction market. As I mentioned, I myself write mostly historically-themed fiction, and the more purely historical a story I wrote, the harder it was to find markets for it; often even my historical fantasy work came back with a rejection letter indicating that the story was just a little too heavy on the history for the magazine's target audience. If I was experiencing this problem, I figured other writers were too, and that's when I started thinking about creating a magazine to cater to those writers.  I also hoped it would generate interest among readers who enjoy those types of stories. Historical novels abound, but back in 2003, there was no print magazine exclusively dedicated to short historical fiction. The Historical Novel Society was publishing Solander biannually with a single story in each issue, and magazines such as F&SF, Asimov's, Realms of Fantasy, etc. occasionally featured alternate history, historical fantasy, or time travel stories. But Paradox provided the only magazine to which fans of these types of stories could turn for a regularly occurring fix.

Did you receive many alternate history submissions to Paradox?

As far as I recall, I used to receive about a hundred submissions per month, and perhaps 20% of them were alternate history.

Why did Paradox stop being published?

I suppose the reason was twofold. One factor was certainly financial; it was becoming increasingly economically unviable to publish a print magazine. I also decided that the magazine was taking too much time away from my own writing, and it was time for me to focus more on that.

Will we ever see Paradox again?

I certainly remain open to the possibility. Paradox was always, foremost, a labor of love, and the decision to end its run was not an easy decision to make. If I do decide to revive it, though, it would almost certainly be as an online magazine rather than a print one.

I just finished reading Nicola Griffith’s wonderful novel, Hild, set in seventh-century Britain; I loved the book’s leisurely pace and the depth with which it brings its historical setting to life. I was particularly struck by how central a role the natural world played in the book.  Nature is something that would certainly have featured more prominently in the lives of men and women living in a pre-industrial age but it’s a factor that is often neglected or underutilized in fiction. Now I’m reading Shirley Jackson’s The Haunting of Hill House, something I've wanted to read for years but never have. I’m enjoying it immensely--it’s dark and funny and filled with so many memorable turns of phrase.

Do you have any current projects you want to talk about?

My current project is a sort of political thriller/murder mystery set in late 10th-century England. For now I’m still in the research and outlining stage, but the book is likely to involve the slaying of Edward the Martyr, the politics of the reign of Aethelred “the Unready”, and the Battle of Maldon. The last two books I wrote were set in the 11th century--one a psychological thriller that explores the legend of Lady Godiva and the other a tale of resistance and rebellion in the years immediately following the Norman Conquest of England in 1066. Before that, I wrote the first book in a planned alternate history trilogy that posits a different outcome for the events of 1066, one in which Harald Hardrada of Norway comes out on top over both Harold Godwineson and Duke William of Normandy. For now I’ve put that trilogy on the back burner, but I definitely plan to return to it at some point. I’m currently shopping these books around to agents.

I am currently an attorney as were you, what was it like ditching the legal world to be a full-time writer?

It was the best decision I could have made, and I haven’t regretted it for a moment. I was a criminal appeals attorney with the Legal Aid Society of Nassau County New York for ten years.  There were aspects of my work I found very rewarding, and I was working with some amazingly talented and dedicated colleagues, but by the end of that decade, I had become very disillusioned with the entire legal profession, and it was time to make a change. I was always more a writer at heart, so all I was really doing was setting myself more firmly on the path I should have been following all along.

Do you have any advice for would be publishers?

I could put my advice in the form of a joke someone once told me... Q: How do you make a small fortune in publishing? A: Start with a large fortune.  But all kidding aside, anyone who’s thinking of starting a publishing venture--specifically a magazine publishing venture, as I did--should disabuse themselves of any notion that it’s going to be a profit-making endeavor. Breaking even, financially, is a more realistic measure of success, and any profit is just icing on the cake. Perhaps the situation is less stark for an online magazine, with which I don’t have direct experience, but for print... such an undertaking has to be a labor of love, first and foremost.
Posted by Mitro at 11:00 AM