Flag Friday: Confederation of the Rio Grande and Texas 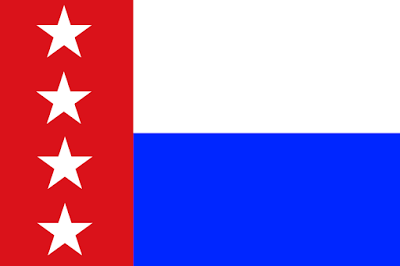 During the Battle of San Jacinto on 21 April 1836 Antonio López de Santa Anna was killed during the fighting. The war for Texan independence continued but the Mexicans suffered major setbacks after that battle. In 1837 another collection of Mexican states declared independence as the Republic of the Rio Grande. The battered Mexican Army gained made renewed attacks into the rebellious territory, but intervention by Sam Houston and his Texan forces secured the independence of the sister republic.

Having fought together against a common foe and facing an uncertain future together the two new republics formed the Confederation of the Rio Grande and Texas as a means to mutual defense and cooperation.

The flag of the Confederation has four stars - one for each of the states: Texas, Coahuila, Nuevo León, and Tamaulipas.

Sean Sherman has been a fan of alternate timelines ever since seeing Spock with a goatee.  By day he is a CPA, at night he explores the multiverse and shares his findings over at his blog, Other Times.
Posted by Mitro at 2:00 PM