The Revolutions by Felix Gilman

In 1893, young journalist Arthur Shaw is at work in the British Museum Reading Room when the Great Storm hits London, wreaking unprecedented damage. In its aftermath, Arthur’s newspaper closes, owing him money, and all his debts come due at once. His fiancé Josephine takes a job as a stenographer for some of the fashionable spiritualist and occult societies of fin de siècle London society. At one of her meetings, Arthur is given a job lead for what seems to be accounting work, but at a salary many times what any clerk could expect. The work is long and peculiar, as the workers spend all day performing unnerving calculations that make them hallucinate or even go mad, but the money is compelling.

Things are beginning to look up when the perils of dabbling in the esoteric suddenly come to a head: A war breaks out between competing magical societies. Josephine joins one of them for a hazardous occult exploration—an experiment which threatens to leave her stranded at the outer limits of consciousness, among the celestial spheres.

Arthur won’t give up his great love so easily, and hunts for a way to save her, as Josephine fights for survival...somewhere in the vicinity of Mars.

The first volume in an extraordinary trilogy of alternative history.

In this, the first volume of renowned author and historian Peter G. Tsouras’s alternative history trilogy, Great Britain’s support for the Confederacy takes it to the brink of war with the Union. The escape of a British-built Confederate ironclad finally ignites the heap of combustible animosities and national interests. When the US Navy seizes it in British waters, the ensuing battle spirals into all-out war. Napoleon III eagerly joins the British and declares war on the United States. Meanwhile, treason uncoils in the North as the antiwar Democrats, known as Copperheads, plot to overthrow the US government and take the Midwest into the Confederacy.

Britannia’s Fist brilliantly describes not just a war of stroke and counterstroke but one in which new technologies—repeating weapons, observation balloons, advances in naval ordnance and armament—become vital factors in the struggle of the young country against the Old World’s empires. For one of the great missed stories of the Civil War was not the advance of military technology but its impediment by incompetence, disorganization, and in some serious cases outright refusal to contemplate anything innovative. Britannia’s Fist is the compelling story of powerful historical personalities who come together as the Union goes into total war mobilization in the fight for its life.

A Rainbow of Blood: The Union in Peril by Peter G. Tsouras

The second volume in Britannia’s Fist, a remarkable trilogy of alternative history.

A Rainbow of Blood continues the epic, exciting story that began in Peter G. Tsouras’s previous alternate history, Britannia’s Fist. The Great War accelerates during a few desperate weeks in October 1863. From the bayous of Louisiana to the green hills of the Hudson Valley, from Chicago in flames to the gates of Washington itself, the conflict uncoils in ropes of fire. French and British armies are on the march, and heavy reinforcements have put to sea. Copperheads have risen in revolt to drag the Midwest into the Confederacy as a vital Union army stands starving and under siege in Tennessee.

The Union staggers under these blows. While the Grenadier Guards march into glory in upstate New York’s apple orchards, from the second story of a shot-up Washington hotel Abraham Lincoln watches a forest of the red flags of rebellion waving over a Confederate column rushing across the Long Bridge. To stop them is a war-worn regiment of New York soldiers. To their backs Washington burns. But new technologies and the art of intelligence are thrown onto the scales, while Russia plans to enter the war to avenge its humiliation in the Crimean War.

A Rainbow of Blood brings forward the Great War from its outbreak to the first great crisis of the embattled republic. Peopled with remarkable personalities of the age, the book rattles with the tramp of armies marching down one of the most intriguing roads not taken—or even imagined—until now.

What if fate had turned out differently in these United States?

What if the Louisiana Purchase never happened?
What if George Washington had been a Loyalist?
What if a billionaire cloned the Founding Fathers?
What if the Vikings had settled North America?
What if the Apollo 11 moon landing had failed?

These and many other scenarios are explored in
Atlered America! 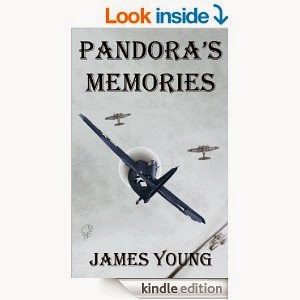 December 1943. Adolf Hitler is dead. Queen Elizabeth II reigns on the Commonwealth throne while a usurper sympathetic to the Nazis inhabits Buckingham Palace. Having turned aside the Soviet Union's initial assault into the Greater Reich, the Wehrmacht is now stymied at the gates of Moscow. With the Red Air Force bloodied, the Kremlin under steady blows from the Luftwaffe, and Joseph Stalin comatose, the desperate Soviet Triumvirate turns to the United States in a plea for aid against the mutual Nazi foe. Indifferently equipped, the young men of the American Air Expeditionary Force (AAEF) are thrown into action in order to keep the Soviet Union in the war.

December 1965. Tabitha Cobb, a Masters student at Berkley University, sets out to learn the truth about the AAEF and the scars it left on its survivors. Attempting to earn a scholarship, Tabitha quickly learns that sometimes ignorance truly is bliss.

"Pandora's Memories" is an alternate history short story that is the first in the Usurper's War series.

Blood and Ashes: A Foreworld SideQuest by Scott James Magner SideQuests are stand-alone stories or novellas that chronicle the heroes, villains, and adventures in The Foreworld Saga across numerous eras and ages. They can be listened to in any order with or without prior knowledge of The Foreworld Saga. As Mt. Vesuvius rumbles ominously, Pompeiian Councilor Valerius needs assistance in performing rituals to protect the city from the wrath of the fire-god, Vulcan. But his agenda is far from benevolent, as he cares less about quieting the volcano than taming it and taking the power for himself. Now it's up to Horatius, a former legionnaire and gladiator, to prevent Valerius's sinister rites from coming to fruition. But with Vesuvius looming over the city - and the dead rising to defend the corrupt councilor - the warrior might have fled a troubled past only to have entered a doomed future...