I like to remind readers that this is a blog about alternate history, not secret history, conspiracy theories, ancient aliens or other pseudo-histories. Alternate history deals with changes to history as we know it, for example, JFK surviving his assassination.

Those other types of histories only deal with different reasons for why history happened the way it did. So to use my JFK example again, a conspiracy theorist might suggest someone other than Lee Harvey Oswald killed Kennedy, but Kennedy will still be dead. His death will lead to LBJ, the Civil Rights Act, the Great Society, escalation in Vietnam, etc. Knowing the "truth" doesn't change the events of history, only our understanding of it.

Nevertheless, speculative fiction often uses secret history, conspiracy theories, ancient aliens or other pseudo-histories to tell a story. Alternate history fiction, is no exception, and while we may at times touch on these subjects, they are not in the same category as alternate history and thus should not be treated the same.

New Release: Emilie and the Sky World by Martha Wells

Last week Emilie and the Sky World by Martha Wells, the sequel to Emilie and the Hollow World, was released. For those who don't know, here is the description from Amazon:


When Emilie and Daniel arrive in Silk Harbor, Professor Abindon, an old colleague of the Marlendes, warns them that she’s observed something strange and potentially deadly in the sky, a disruption in an upper air aether current. But as the Marlendes investigate further, they realize it’s a ship from another aetheric plane. It may be just a friendly explorer, or something far more sinister, but they will have to take an airship into the dangerous air currents to find out.

Emilie joins the expedition and finds herself deep in personal entanglements, with an angry uncle, an interfering brother, and an estranged mother to worry about – not to mention a lost family of explorers, the strange landscapes of the upper air, and the deadly menace that inhabits the sky world.

Paul Weimer reviewed the book for SF Signal and said it was "[a] sequel that provides an entertaining second visit to Wells’ world and strengthens some of the weaknesses of the first novel." Pretty decent review for Sky World. If you would like to learn more check out Martha Wells' interview at Stellar Four and, as always, if you have read either of the books, let us know in the comments below or submit the review to be posted on The Update!

And don't forget if you are thinking of buying this or any other book, please click through the Amazon banner at the top right and put some wind in The Update's sails.

War of the Vikings Confirms Incoming Invasion on April 15

For more information, you can visit warofthevikings.com.

See, I told you it would be quick.

Map time! First up, a map by Future8 inspired by current events where every host nation of the Winter Olympics invades a neighbor two weeks after the closing ceremony:

Wow, that was a lllloooonnnnggg one. Anywho, our next map is a balkanized North America from a new map maker to AH.com, EliBarrowBoy, that I thought was just really well done and featured a few twists on the old trope: 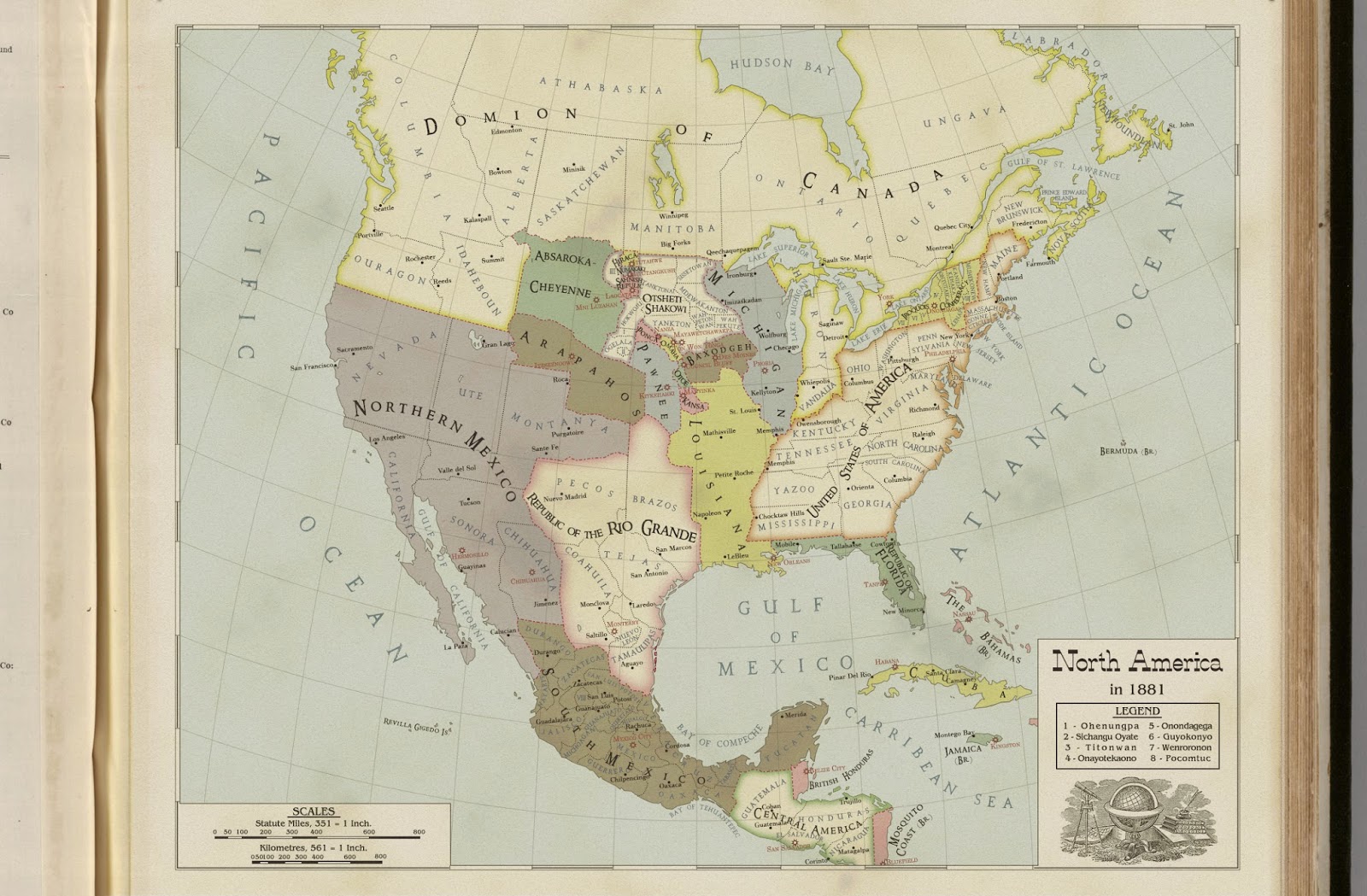 Finally we finish this week's map gallery with the winning entry to Europa Universalis's most recent Alternate History Friday: The Might of Japan (and Ukraine looks to be doing good as well)! 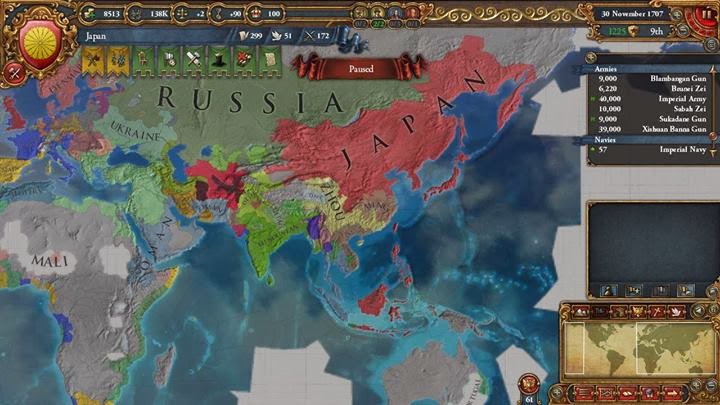 Submit your maps to ahwupdate at gmail dot com.

Time now for some videos. Up first we have another video from Friend of The Update, Cody Franklin of the Alternate History Hub. This is the second alternate countries video he has created and though some of the countries showcased can be silly, I think you will enjoy it:
Next up, I have recently become a fan of Cinema Sins, a YouTube channel where popular movies are mercilessly dissected. They had two movies torn apart this week that I think alternate historians will enjoy. First is the most historically inaccurate film of all time, 300:
There have been a lot of 300 related stuff last week now that the sequel, 300: Rise of an Empire, is in theaters. I have decided, however, not to write anything on it until the next Weekly Update. If you are still interested though, here is a review of the film from The Philippine Star.

The second video this week from Cinema Sins featured a brutal review of this fan made film set in the Indiana Jones universe called Indiana Jones & The Kingdom of the Crystal Skull:
I mean that was a fan made film right? The one with the Harrison Ford look alike? I mean there is no way a talented director like Spielberg would attach his name to something that bad...he wouldn't...would he?

March 28: Last day to fund Ripples in the Chalice on Kickstarter.

April 26: Friend of the Update, Chris Nuttall, will be at AuthorCon UK at the Elsewhen Press table.

May 11: Series premiere of Penny Dreadful on Showtime.

1636: Commander Cantrell in the West Indies – Snippet 01 by Eric Flint.
Altered America: Cover and Contents by Martin T. Ingham at Three Cents Worth.
Cover Reveal for Cherie Priest’s Maplecroft at Tor.
Gideon Smith and the Brass Dragon – Tor catalog copy by David Barnett at Postcards from the Hinterland.
Guest Post: Peter Higgins, author of Woflhound Century and Truth and Fear at My Bookish Ways.
History and science fiction theme to debut children's novel by Su Carroll at Western Morning News.
Steampunk Gorillas by Maeve Alpin at Steamed!
Tansy Rayner Roberts on “Cranky Ladies” at SF Signal.
What is Steampunk? And why I love it. by John Stanton.
Writing Historical Fantasy: Guest Post by Barb Galler-Smith at Suzenyms.


5 Badass People Who Stood Up to Infamous Dictators by Pat Carnell and Eric Yosomono at Cracked.
5 Near Deaths That Would Have Changed the Face of History by Jacopo della Quercia and Matthew Moffitt at Cracked.
Counterfactual Constructions by Eve Bachrach at Boom.
Fur flies over 16th century 'rocket cats' warfare manual at The Guardian.
Let’s play the Niall Ferguson First World War Counterfactual Game by Jonathan Boff at Thoughts on the First World War.
Were the Spartans truly the greatest warriors of all time? by Esther Inglis-Arkell at io9.
Why a Nuclear Ukraine is an Empty Counterfactual by Anton Strezhnev at Casual Loop.

6 Things Movies Don't Show You About Being an Archeologist by Robert Evans and Hadas Levine at Cracked.
‘300: Rise of an Empire’: Ancient history becomes fantasy-action movie by Brylle B. Tabora at Philippine Daily Inquirer.
Could You Travel Through Time Like They Do in Movies? by Kevin Carr at Film School Rejects.
H.P. Lovecraft Describes the Unspeakable Things He Witnessed in the Star Wars Films by Zack "Geist Editor" Parsons at Something Awful.
Let’s Unpack Zack Snyder’s Ugly, Mean-Spirited Terry Gilliam Slam by Jason Bailey at Flavor Wire.

Call of Cthulhu: The Wasted Land Slithers on to Steam by Casey Douglass at Geek Syndicate.
Yes, This Nazi-Killing Video Game Hero Was Of Jewish Descent by Stephen Totilo at Kotaku.

Everett Maroon at Diversity in YA.
Ramona Wheeler at The Qwillery.

Divide by William Overgard at Other Times.
Dominion by CJ Sansom at JulzReads.
Elementary 2.16 and 2.17 at Thinking about books.
Homeward Bound by Harry Turtledove at Geekbrarian.
Revolution 2.15 at Paul Levinson's Infinite Regress.

BBC’s Jonathan Strange and Mr Norrell by Noel Green.
Get Ready for Revolution's Dreamcatcher Episode with Featurettes and Clip by Erin Willard at SciFiMafia.com.
Sitcom Counterfactuals: Episodes from "The Big Bang Theory" and "Community" by Gavriel D. Rosenfeld at The Counterfactual History Review.
Steampunk on the Runway by Ray Dean on Steamed!

Matt Mitrovich is the founder and editor of Alternate History Weekly Update and a blogger on Amazing Stories. Check out his list of short fiction. When not writing he works as an attorney, enjoys life with his beautiful wife Alana and prepares for the inevitable zombie apocalypse. You can follow him on Facebook or Twitter.
Posted by Mitro at 11:00 AM