Hey everybody, I got some great news. In my quest to improve the quality of the content and appearance of The Update, I have come to the stark realization that I need money to realize my goals. I have tried to do this in the most unobtrusive way possible, but my current model of generating revenue just isn't cutting it.

Luckily, changes to my home state's laws mean that the Amazon Affiliate program has once again been reinstated in Illinois. What does this mean? I have formed a partnership with Amazon to share revenue from products purchased through The Update. So if you click on the banner at the top right or one of the Amazon links embedded in an article and then purchase the book/comic/game/etc., The Update will share a small piece of the sale.

The good news is no one is under any obligation to buy anything they already weren't planning to buy. If you are going to buy something, however, please click on the banner or links you find here on The Update and support our mission to bring the best possible alternate history news and reviews to the Internet. If I make enough money off this I hope to invest it in a writing staff, a new domain main, new original fiction, books for monthly giveaways and more.

So please, if you see something you like, click on the Amazon links and help support Alternate History Weekly Update.

BOOM! Studios announced the March debut of a comic book version of Clockwork Angels by Kevin J. Anderson. Based on the band Rush’s concept album of the same name, Nick Robles will be the interior artist and Hugh Syme will be the cover artist.

“Rush is one of our all-time favorite rock bands here in the office, so we immediately jumped at the chance to work on Clockwork Angels,” said BOOM! Studios Editor-in-Chief Matt Gagnon. “The icing on the cake is that author Kevin J. Anderson is somebody we've always wanted to work with, so this is an all-around thrill. Mr. Anderson and Mr. Peart have brought us a breathtaking story that illustrator Nick Robles has beautifully visualized.”

For those who don't know, here is the description of tClockwork Angels from the press release:


Owen Hardy, like all the people of Albion, has lived his whole life under the rule of The Watchmaker. His entire life has been planned down to the exact second. But what happens when a young boy decides that things should not always goes as planned?

Clockwork Angels #1 arrives in comic shops on March 19th, the four-year anniversary of the album’s initial announcement by the band members, with a cover price of $3.99. The first issue will ship with two variant covers including a subscription cover and a retailer incentive. ECW Press will release the paperback version in May.

Now I have talked about Clockwork Angels

a lot in the past, but are you looking forward to seeing it adapted into a comic book? Let us know in the comments below.

James Lovegrove's Pantheon series, which spawned the "Godpunk" genre, will draw to a close with Age of Shiva

. The final book in the series will be released by Solaris on March 26 in the US and Canada; and April 10 in the UK.

Set in a world where the Hindu gods hold sway, here is the description from the press release:


Zachary Bramwell, better known as the comics artist Zak Zap, is pushing forty and wondering why his life isn’t as exciting as the lives of the superheroes he draws. Then he’s shanghaied by black-suited goons and flown to Mount Meru, a vast complex built atop an island in the Maldives. There, Zak meets a trio of billionaire businessmen who put him to work designing costumes for a team of godlike super-powered beings based on the ten avatars of Vishnu from Hindu mythology.

The Ten Avatars battle demons and aliens and seem to be the saviours of a world teetering on collapse. But their presence is itself a harbinger of apocalypse. The Vedic “fourth age” of civilisation, Kali Yuga, is coming to an end, and Zak has a ringside seat for the final, all-out war that threatens the destruction of Earth.

The Guardian has described the Pantheon series as being: “[t]he kind of complex, action-oriented SF Dan Brown would write if Dan Brown could write”. Wow, what a sick burn on Dan Brown. But do you think the series is as good they say? You know the deal, leave a message in the comments.

Vampires, Ghosts and Lady Detectives in Chuck Miller’s Vionna and the Vampires

, has a new novel from Pro Se Productions for those who enjoy pulpy, mash-ups: Vionna and The Vampires: Moriarty, Lord of the Vampires

. Here is the description from the press release:


Vionna Valis and Mary Jane Kelly are a pair of hard working psychic detectives experiencing a run of bad luck. A new detective agency, the Femmes Fatales, is taking most of their business. Things seem to change for the better in the form of a new client named Scudder Moran, a wealthy young man with a unique problem; He has been targeted by the very, very late Professor James Moriarty—the Napoleon of Crime in another century, now Lord of the Vampires!

Vionna and Mary find themselves in the middle of a case where everything is both improbable and impossible. How will they find their way to the truth? Unexpected help arrives in the ghostly person of the Great Detective himself, and they set about unraveling a tangled web of lies and secrecy that reaches deep into each of their lives. Can they find the light before Moriarty unleashes his final, most horrific scheme?

“Chuck Miller,” says Tommy Hancock, Partner in and Editor-in-Chief of Pro Se Productions, “is by far one of the most unique talents in Genre Fiction today. He takes the staples and standards of several different types of stories and doesn’t just mix them together. Somehow he intricately weaves usually disparate parts into the wildest trip on fiction I think any reader has ever taken. The Black Centipede stands out as a vastly distinct character from the rest of his masked cohorts and You’ll most definitely discover that Vionna and her cast of cohorts shine in their own deliciously dark way as well.”

Vionna and the Vapires will be the first volume in the Moriarty, Lord of the Vampires trilogy and is currently available where books are sold.

In today's Map Gallery we begin with a fan map of the Stargate universe by Heisenberg. Specifically when the nations of the world joined the Stargate Program: 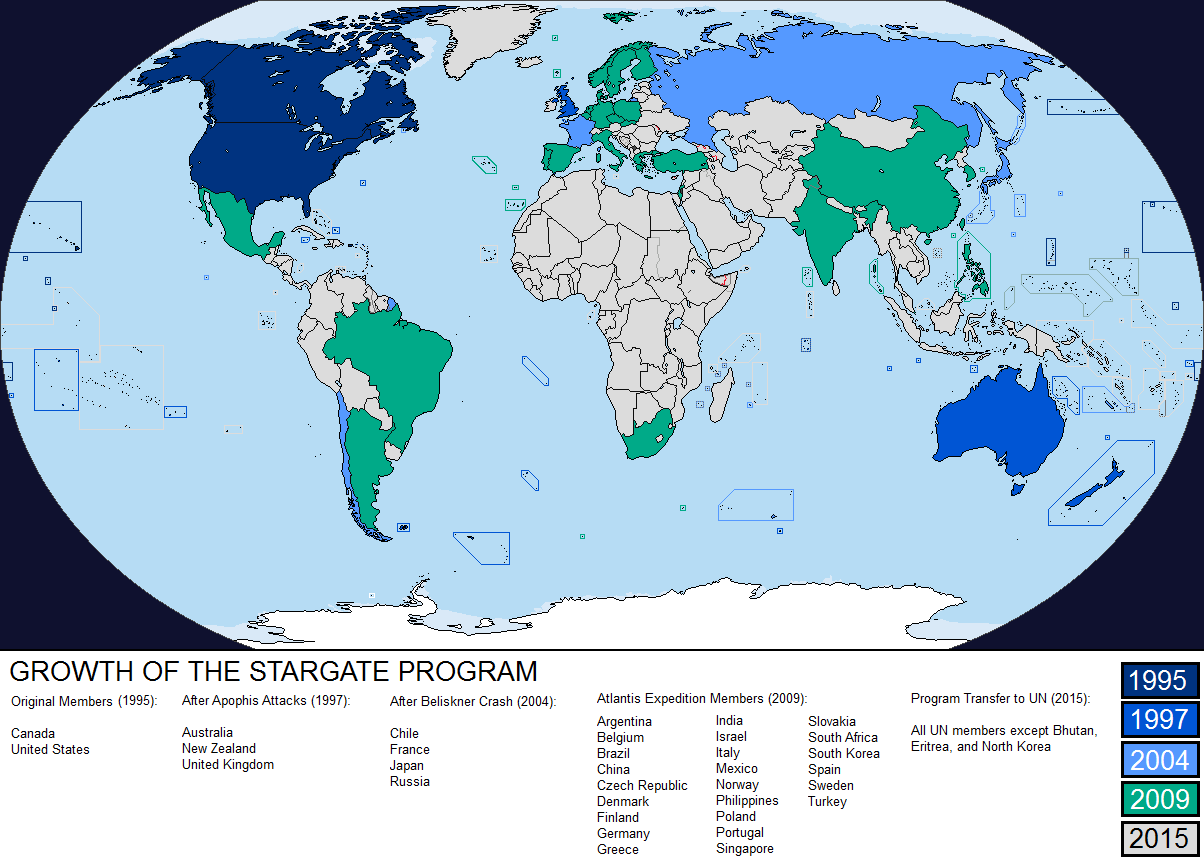 Next up I have my first map from the Alternate History Wiki to feature. It is a map of the Mayan Empire from the Principia Moderni II Map Game posted by CourageousLife that I just thought looked really cool: 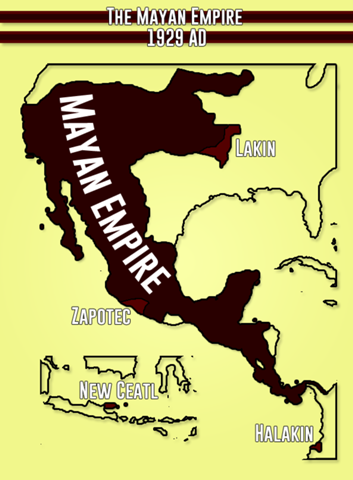 We finish up with a very curious map from the webcomic Stand Still, Stay Silent. Don't know much about the story, just saw the map at AH.com and thought it looked neat. Enjoy:
If you would like to submit a map to our weekly Map Gallery, email me at ahwupdate at gmail dot com.

Alright, we have a lot of videos to get through. Fist up we have another video from my new favorite YouTube channel, the Alternate History Hub. This week we learn how the world would be different without Nintendo:
Stay tuned for an interview with the channel's creator, Cody Franklin, that I hope to post this week. Next up, ever wonder how they make the sound effects in Europa Universalis:
Now on to meat of this Video Gallery. Two important video game trailers came out last week. First, the PlayStation horror game The Order: 1886 released two new videos. We begin with their new trailer:
And we follow that up with some gameplay and other info on the game:
Finally we wrap this gallery up with the new Wolfenstein: The New Order trailer:
Any other videos you would like to recommend? Let us know at ahwupdate at gmail dot com.

March 15: Last day to fund the That Ain't Right: Historical Accounts of the Miskatonic Valley Kickstarter by Jeremy Zimmerman.

March 15: Last day to fund the Storms of Lazarus Kickstarter by Karen Kincy.

March 31: Last day to enter the Southern Cross: Annuit Coeptis giveaway on Goodreads. (And don't forget to check out my review.)

Author (Harry Turtledove) tells tale of alternate history by Wes Higgins at The Oracle.
Brief History of Mexican Steampunk at Merenarios de DIOS.
Satellite Earth by Zadokofpavis at Alternaties Corporation.
Steampunk, Dieselpunk and Stereotype Threats at Anachrocon!' at Chronicles of Harriet.
Time travellers: please don’t kill Hitler by Dean Burnett at The Guardian.
Writers’ Workshops – Find one that works for you by Fran Wilde at Apex.

3 Supervillain-Worthy Origin Stories of Famous Presidents by Daniel O'Brien at Cracked.
African Samurai, Tom Cruise, and Bloody Swords: What You Didn't Know About Japan's Famous Warrior Class by Matt Staggs at Suvudu.
How WWI shaped the 20th century and beyond by Angus Mackinnon at Yahoo.
Indian history textbooks claim Japan nuked the United States in 1945 by Charlie Jane Anders.
Thinking About Historic Preservation by Bailey Bradford at Making History.
Wait, they had a word for that? 1811 Slang by Gail Carriger.
What H.G. Wells Got Wrong When He Predicted the Atomic Bomb by Charlie Jane Anders at io9.
Who’s Afraid of a Counterfactual (Part II)? What if Leningrad Had Surrendered to the Nazis in World War II? by Gavriel D. Rosenfeld The Counterfactual History Review.

6 Conspiracy Theories That Inspired Sci-Fi and Horror Movies by Ryan Lambie at Den of Geek.
Trailer for 'Jodorowsky's Dune' Gives a Peek of One of the Craziest Movies Ever Proposed by Max O'Connell at Indiewire.

Dan Lind at Matchsticks for my Eyes.
Daniel Suarez at Publishers Weekly.

The Adjacent by Christopher Priest at Thinking about books.
Invention of Love at Steampunk.com.
Fiddlehead by Cherie Priest at Amazing Stories.
Leviathan by Scott Westerfeld at Chaos Theory.