I had a great time at Capricon this weekend. Having never been on a panel before, it was an amazing experience to be around so many authors, experts and fans with so much knowledge on alternate history, time travel and other SF topics. Plus I got to actually hear people laugh at my bad jokes. Check out Amazing Stories where I will go into more details about my Capricon experience.

So I am working the late shift this week, so social media promotion for my posts won't go up until later than usual. Hope you guys don't mind.

As Tartary Burns: adventure fantasy set in the days of Russian empire building

Airship 27 Productions has a new historical fantasy out called As Tartary Burns, which has been described as "an action packed novel set in the days of Russian empire building." Here is the description from the press release:


For generations, the freedom loving Cossacks battled their enemies; the Ottoman Turks and Crimean Tartars, for the supremacy of the rugged Steppes. Frustrated by the constant raids of these reckless, horse-riding warriors, Constantinople prepares a major campaign that will end the Cossacks and their way of life forever.

Realizing they are severely outnumbered against such a Turkish reprisal, the Cossack Headsman seeks out the sorcerer Alexsandr with a bold scheme. He wants Alexsandr to enter the realms of magic and enlist the aid of magical creatures of Slavic myth as allies. With the help of his friend, Commander Marko and the battled hardened Bohun, the wizard must summon all his skills, both martial and arcane, to fulfill his sacred mission and, in doing so, save his people.

“When I first read the manuscript, I was very excited,” says Airship 27 Productions’ Managing Editor, Ron Fortier. “There seems to be very little interests these days in classic adventure tales. This marvelous book is the exception we've been waiting for.”

If you have read As Tartary Burns, please let us know in the comments.

Our usual Video Gallery segment is being replaced today by a brief showcase of a channel I recently discovered dedicated to alternate history on YouTube. It is called "Alternate History Hub" and describes itself as "[an] entire channel dedicated to the 'What If?' of history. Using knowledge of geography, population and other historical facts we can see what could have happened if events changed." Episodes feature clips and commentary from channel's creator Cody Franklin on different AH topics. Here is the most recent video:
With almost 7000 subscribers I am surprised I have only just now discovered this gem and I look forward to future videos. Don't forget to check out Cody's blog as well.

This week's maps cover a wide variety of topics. First up, a non-AH map showcasing the type of governments each OTL nation has by Iori: 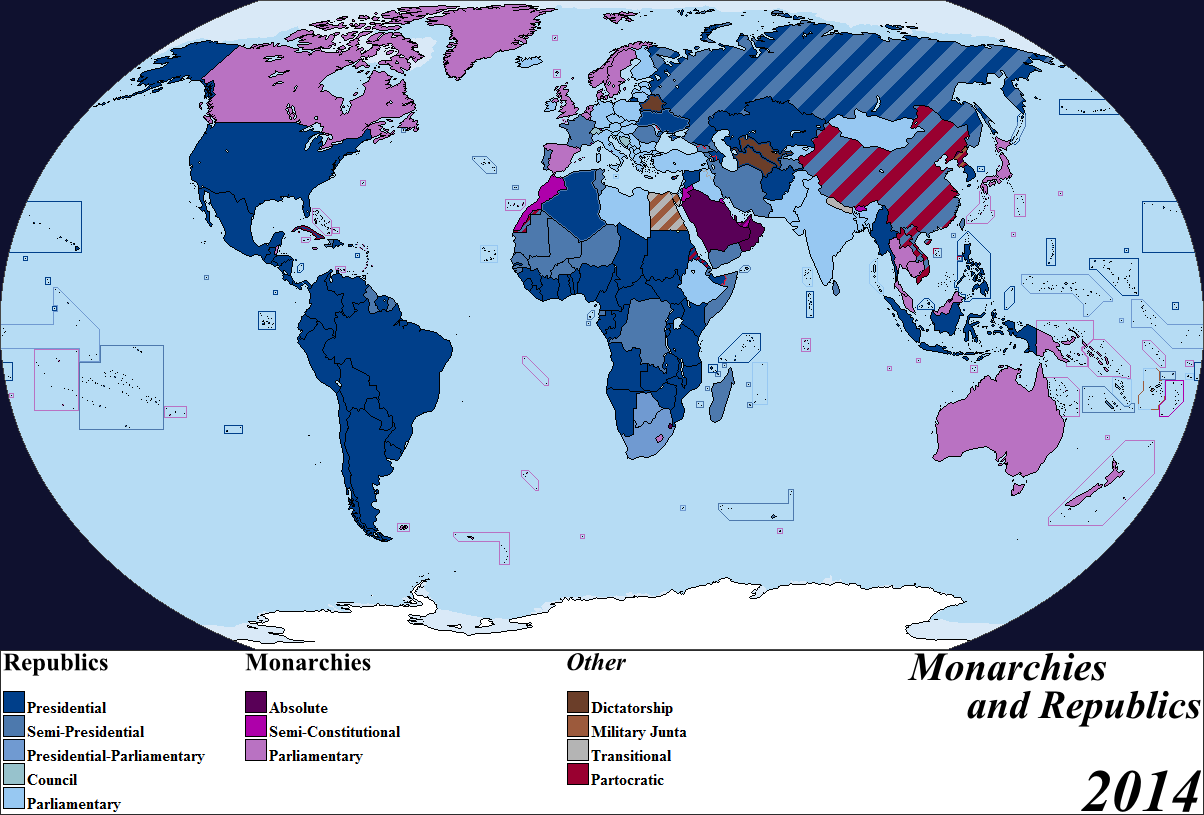 Next we have a unique alternate geography map where Doggerland did not sink beneath the waves. This Doggerlandic Europe is brought to you by Joyeux: 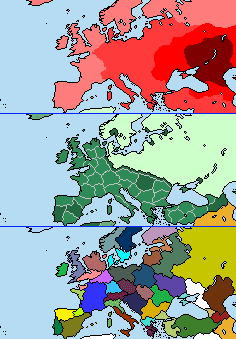 And finally we have a map where the United States is "alone" on Earth. I can only speculate that some ASB decided to transport the USA to some uninhabited Earth or else wiped out everyone else (i.e. Without Warning). Anywho, here is the map by Beedok: 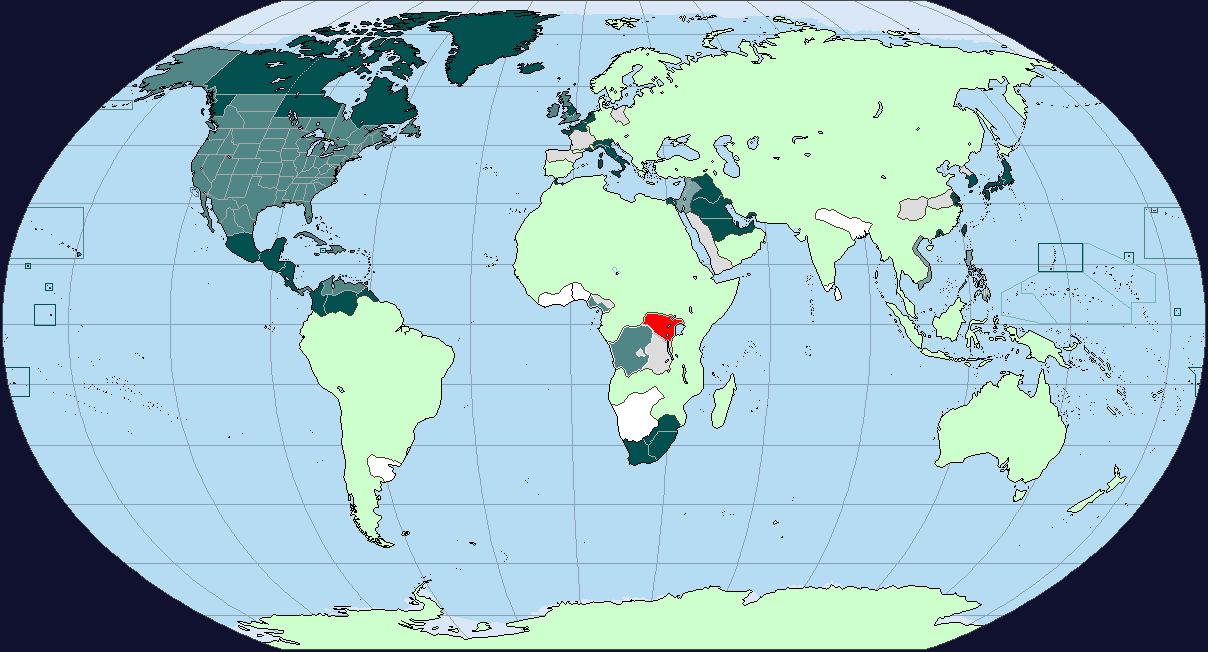 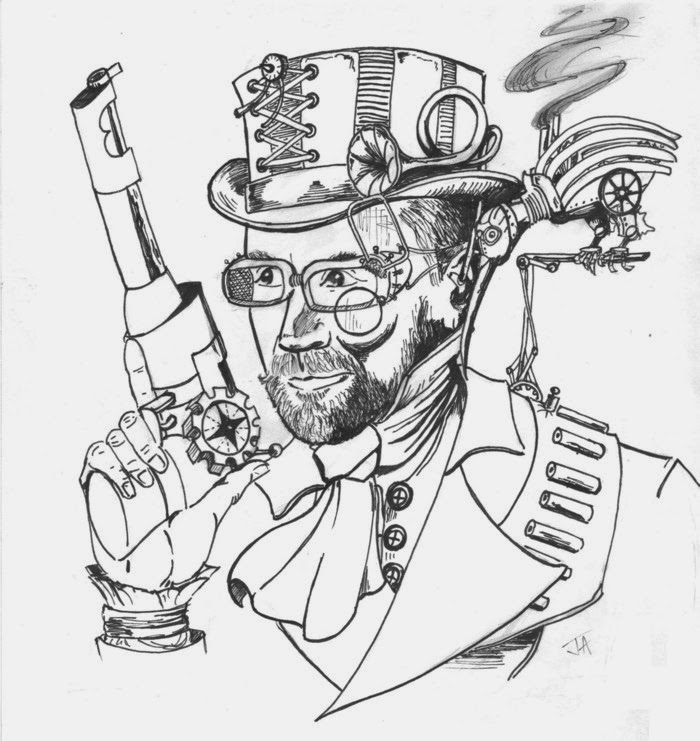 6 Awesome Theories That Totally Change Famous Characters by Cezary Jan Strusiewicz at Cracked.
Why Steampunk? by Maeve Alpin at Steamed.

Allen Steele's "V-S Day" at My Book, The Move.
A chart that explains time travel in Lauren Beukes' The Shining Girls at io9.
Classic Historical Fiction Short Story: Young Goodman Brown by Nathaniel Hawthorne at Alt Hist.
Excerpt from Three Princes by Ramona Wheeler at The Qwillery.
Kaddish for the Last Survivor by Michael A. Burstein at Apex Publications.
A love story, with engineering. Hope and the Patient Man by Mike Reeves-McMillan #steampunk at The Masquerade Crew.
The Most Unusual Alternate History Novels Ever Published by Emily Stamm at io9.
Pamela Sargent’s THE SHORE OF WOMEN and CLIMB THE WIND Re-Issued as eBooks at SF Signal.
Table of Contents: THE MAMMOTH BOOK OF STEAMPUNK ADVENTURES Edited by Sean Wallace at SF Signal.

The 8 Worst Mistakes Made by the Axis During World War II by George Dvorsky at io9.
Awkwardly Ever After: What if Britain had voted to leave the EEC in 1975? by Tim Oliver at IP Journal.
Fixing the NASA Piloted Program After Challenger: Views from 1989 and 1993 (plus an alternate history addendum) by David SF Portree at Wired.
A Medieval Counterfactual: The Black Death and the Jews by Gavriel D. Rosenfeld at The Counterfactual History Review.
The missing counterfactual in Indian politics by Suvojit Chattopadhyay.
What If Hitler had won? Counterfactual history by Tom Stranney at The Yorker.
What if Weezer’s Pinkerton was a major success in 1996? by Michael Roffman, Nick Freed, Justin Gerber and Dan Caffrey at CoS.

The Great Martian War Is An Alternate History Endless Runner From The People Who Know Made Up History Best by Ryan Whitwam at Android Police.

CSA: Southern Cross, Annuit Coeptis by Dorvall at This Day in Alternate History.
Elementary 2.15 at Thinking about books.
Empress of the Sun by Ian McDonald at SF Signal.
The Scourge and The Scourge: Nostrum by Roberto Calas at Falcata Times.
World War II by Steve Sailer at Taki's Magazine.

Alt-Soviet epic The Red Star could become the wildest show on TV by Charlie Jane Anders at io9.