The Year 1632, and in northern Germany things couldn't get much worse. Famine. Disease. Religous war laying waste the cities. Only the aristocrats remained relatively unscathed; for the peasants, death was a mercy.

The Year 2000, and things are going okay in Grantville, West Virginia.  Half with the town is attending the wedding of Mike Stearn's sister, and everyone there (including the entire local chapter of the United Mine Workers of America, which Mike leads) is having a good time.

When the dust settles, Mike leads a group of armed miners to find out what happened and finds the road into town is cut, as with a sword. On the other side, a scene out of Hell: a man nailed to a farmhouse door, his wife and daughter attacked by men in steel vests. Faced with this, Mike and his friends don't have to ask who to shoot. At that moment freedom and justice, American style, are about to be introduced to the Thirty Years' War.

Orphaned by a plane crash, raised in the wilds of a lost world hidden somewhere beneath a constant mist, The Big Guy and his ape-man brother from another mother are living a life of danger amongst rampaging dinosaurs, giant birds, warring ape tribes, and all manner of deadly beasts. It's a wonderful existence for someone like The Big Guy and his furry brother, except for the flea problem. Then an expedition of explorers from the outside turn his world inside out. Or rather a very blonde beauty called The Woman does. It leads to his and his ape brother being convinced to fly to New York by zeppelin, where they become the toast of the town. They even make Hollywood movies. It seems perfect. At least until The Big Guy does something that comes quite naturally to him in the wild, but leads to public humiliation in this new found world. To make matters worse, his ape brother has grown to not only love the pampered life, meals he doesn't have to chase down, good cigars, fine wines and statuesque women, he's come to like the Wrong Woman.

Changes are afoot. They lead to a return to the world beneath the mist, and a deadly and unexpected encounter with a foe that is in many ways far worse than any dinosaur. Envy, jealousy, greed, fleas, and pyramids under the mist, are all part of this rollicking novella of the sort only Joe R. Lansdale could write. And don't forget dinosaurs.

Empress of the Sun by Ian McDonald

World-hopping, high-action adventure starring a smart boy with computer skills and a tough girl who pilots a blimp

The airship Everness makes a Heisenberg Jump to an alternate Earth unlike any her crew has ever seen. Everett, Sen, and the crew find themselves above a plain that goes on forever in every direction without any horizon. There they find an Alderson Disc, an astronomical megastructure of incredibly strong material reaching from the orbit of Mercury to the orbit of Jupiter.

Then they meet the Jiju, the dominant species on a plane where the dinosaurs didn't die out. They evolved, diversified, and have a twenty-five million year technology head-start on humanity. War between their kingdoms is inevitable, total and terrible.

Everness has jumped right into the midst of a faction fight between rival nations, the Fabreen and Dityu empires. The airship is attacked, but then defended by the forces of the Fabreen, who offers theEverness crew protection. But what is the true motive behind Empress Aswiu's aid? What is her price?

The crew of the Everness is divided in a very alien world, a world fast approaching the point of apocalypse.

Lord Scott Oken, a prince of Albion, and Professor-Prince Mikel Mabruke live in a world where the sun never set on the Egyptian Empire. In the year 1877 of Our Lord Julius Caesar, Pharaoh Djoser-George governs a sprawling realm that spans Europe, Africa, and much of Asia. When the European terrorist Otto von Bismarck touches off an international conspiracy, Scott and Mik are charged with exposing the plot against the Empire.

Their adventure takes them from the sands of Memphis to a lush New World, home of the Incan Tawantinsuyu, a rival empire across the glittering Atlantic Ocean. Encompassing Quetzal airships, operas, blood sacrifice and high diplomacy, Ramona Wheeler's Three Princes is a richly imagined, cinematic vision of a modern Egyptian Empire.

V-S Day: A Novel of Alternate History by Allen Steele

With a gift for visionary fiction that “would make Robert A. Heinlein proud” (Entertainment Weekly) three-time Hugo Award-winning author Allen Steele now imagines an alternate history rooted in an actual historical possibility: what if the race to space had occurred in the early days of WWII?

It's 1941, and Wernher von Braun is ordered by his Fuehrer to abandon the V2 rocket and turn German resources in a daring new direction: construction of a manned orbital spacecraft capable of attacking the U.S. Work on the rocket—called Silbervogel—begins at Peenemunde. Though it is top secret, British intelligence discovers the plan, and brings word to Franklin Roosevelt. The American President determines that there is only one logical response: the U.S. must build a spacecraft capable of intercepting Silbervogel and destroying it. Robert Goddard, inventor of the liquid-fuel rocket, agrees to head the classified project.

So begins a race against time—between two secret military programs and two brilliant scientists whose high-stakes competition will spiral into a deadly game of political intrigue and unforeseen catastrophes played to the death in the brutal skies above America.

Fresh from university, Eliza Hardison is determined to crusade for workers’ rights until her cousin Dexter, the Makesmith Baron, prevails on her to represent Hardison House in the American Dominion Sky and Steam Rally.

The competition is fierce, but only one opponent really matters to Eliza. Dexter’s protégé, Matthew Pence, was always like a big brother to her. But now she’s grown up, and Matthew has made a break from Hardison House with his own business venture—and made his own entry in the rally.

Matthew intends to win while keeping Eliza safe on the perilous route from New York to San Francisco. As the threats escalate through treacherous skies and uncharted American wilds, though, Eliza and Matthew must work together, discovering a bond deeper than either could have imagined…but is winning the rally more important than winning at love?

The Gravity of the Affair: Being an Account of Horatio Nelson's First Command Upon the Sea and Stars by Michael J. Martinez 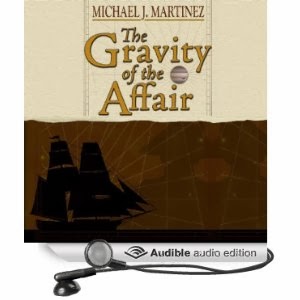 Before his victory at the Nile. Before his scandalous personal life made headlines. Before he crushed the French and Spanish fleets at Trafalgar. Before he died a martyr. Horatio Nelson, England's greatest naval hero, assumed his first command, the 12-gun brig HMS Badger, at the tender age of 20.

History tells us his first voyages as captain were unremarkable. Yet in the Known Worlds, where sailing ships ply the Void and the mystic science of alchemy works wonders, Nelson's first command goes quite differently. With his brashness and emotions untempered by experience, Nelson's rash actions as captain of the Badger threaten his heroic destiny. The Gravity of the Affair is an audiobook set in the Known Worlds of The Daedalus Incident, with events that tie into the audiobook (though both works may be enjoyed independently of one another). 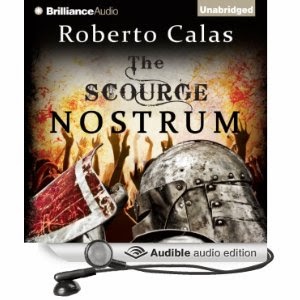 The journey north ended with The Scourge. The journey for a cure has just begun¿Sir Edward Dallingridge survived his journey through the anarchy that is now England, leaving in his wake the bodies of mad lords, foul invaders, friends, and the risen dead. There was nothing on earth that could keep him from the woman he loves. Nothing but the horror that has already consumed her. His journey is over, but his mission is far from complete. As a knight of the realm, he has defended England from every enemy it has. But how does one drive away a plague sent from hell? His only hope lies in the rumors of a cure - a treatment concocted by a strange man on an island fortress. Edward will do everything in his power to find this alchemist and to bring Elizabeth back from the walking terror she has become. The Scourge: Nostrum is the follow-up to The Scourge, continuing the harrowing quest of Sir Edward in a world that knows no God, no laws, and no hope.