I have returned. Those who follow me on Facebook probably already learned of the reason for my sudden leave of absence. For those who don't know, my wife and I lost our child. She was born as a stillborn on the 10th. We named her Geraldine Erin after our mothers.

As you can expect this has been a very difficult time for my wife and I. Not knowing how I would react to this tragedy and wanting to help my wife recover, I took time off of work and my writing responsibilities. I learned that everyone deals with grief differently and while I do not regret my decision, I believe it is time I return to my normal life. I imagine that if I had lost my daughter when she was much older, she would be ashamed of her father for giving up the things he loved. So I am now motivated more than ever to not let her down.

Thank you to everyone who has contacted me with their condolences. My wife and I feel blessed to have such support, even from people we have never met in person. I look forward to continuing my coverage of alternate history here at The Update.

His first published story was “To Tell the Truth,” which appeared in Galaxy in 1960, and his first novel, Kelwin, came out ten years later. He wrote a lot of fiction under his own name, but also used several pseudonyms and house names. In addition to his speculative fiction, he also wrote mysteries, comics, media tie-in novels, and some Tom Swift and Hardy Boys novels. His most recent story may be “Bloaters,” which appeared in the 2013 anthology Impossible Monsters, while his most recent collection, Other Seasons: The Best of Neal Barrett, Jr., appeared in 2012 from Subterranean Press.

Barrett’s long and storied career resulted in surprisingly few award nominations. His only Hugo and Nebula nominations were for “Ginny Sweethips’ Flying Circus” (a novelette published in the February 1988 issue of Asimov’s). He earned a Theodore Sturgeon Award nomination the same year, for “Stairs” (Asimov’s, September 1988), and a World Fantasy Award nomination for his 2000 collection Perpetuity Blues and Other Stories.

Barrett wrote one alternate history short story according to Uchronia. Titled "The Leaves of Time", it was published in 1971 by Lancer. The story is set during an alien invasion, where a human soldier is thrown into an alternate North America that was settled by Vikings, but he is pursued by an alien. If you would like to learn more information about Barrett, you can check out the unofficial fan site about his works. 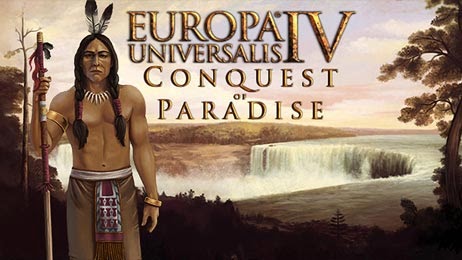 Last week, Paradox released Conquest of Paradise, the first expansion to Europa Universalis IV. Available for Windows, Mac, and Linux, Conquest of Paradise provides players of Paradox’s strategy game with an all-new set of challenges during the Age of Exploration, including a randomized American continent, trading with the natives, establishing colonies, and more. Players can also take control of newly formed colonial nations or play as one of several Native American nations, complete with unique buildings, events, and mechanics. See the trailer below:
You can also check out a let's play (or try in this case) of the expansion pack at Quill18's YouTube channel:
There is also a new patch for Europa Universalis IV and you can check out the notes here. If you have played Conquest of Paradise or Europa Universalis IV, we want to know. Leave a message about it in the comments or shoot us an email.

Here are some more videos for the alternate historians out there. First up, what did Total War: Shogun 2 get right and wrong about Japanese history? Find out at History Respawned:
Next up, learn about Zoomin Games' favorite memories from the alternate history classic Red Alert 2:

Finally, can you name the eight films that were saved by historical inaccuracies? Cracked can:

25 Time Travelers NOT From Gallifrey by Marc Buxton at Den of Geek.
Bright Ideas: Alternate History by Matt Foss at Foss' Flicks.

Another Pacific War Timeline: A Different Leyte Gulf by Matthew Quinn at The World According to Quinn.
Counterfactual Croydon: #OccupyCroydon by Tom Black at The Croydon Citizen.
Japan WWII soldier who hid in jungle until 1974 dies by Hiroshi Hiyama at Yahoo.

1984: the romantic film. Love the idea? by Alison Flood at The Guardian.
Always a Time Traveler’s Girlfriend, Never a Time Traveler: Rachel McAdams and Science Fiction’s Weirdest Typecasting by Ryan Britt at Tor.com.

Emma Jane Holloway at My Bookish Ways.
Lavie Tidhar at The Skiffy and Fanty Show.
Ian Tregillis at S&L Podcast.