Winner of the 2012 Sidewise Award.

1952. Twelve years have passed since Churchill lost to the appeasers and Britain surrendered to Nazi Germany. The global economy strains against the weight of the long German war against Russia still raging in the east. The British people find themselves under increasingly authoritarian rule--the press, radio, and television tightly controlled, the British Jews facing ever greater constraints.

But Churchill's Resistance soldiers on. As defiance grows, whispers circulate of a secret that could forever alter the balance of the global struggle. The keeper of that secret? Scientist Frank Muncaster, who languishes in a Birmingham mental hospital.

Civil Servant David Fitzgerald, a spy for the Resistance and University friend of Frank's, is given the mission to rescue Frank and get him out of the country. Hard on his heels is Gestapo agent Gunther Hoth, a brilliant, implacable hunter of men, who soon has Frank and David's innocent wife, Sarah, directly in his sights.

C.J. Sansom's literary thriller Winter in Madrid earned Sansom comparisons to Graham Greene, Sebastian Faulks, and Ernest Hemingway. Now, in his first alternative history epic, Sansom doesn't just recreate the past--he reinvents it. In a spellbinding tale of suspense, oppression and poignant love, DOMINION dares to explore how, in moments of crisis, history can turn on the decisions of a few brave men and women--the secrets they choose to keep and the bonds they share.

In the Provincial Union of Victoriana, a steampunk America that lost the Revolutionary War, Charmian “Kit” Kittredge makes her living investigating crimes of magic. While Kit tries to avoid the nobs of high society, she follows mysteries wherever they lead.

Unlike most folks, Kit doesn’t believe in magic, but she can’t refuse to help Lady Diana Walsh, who claims a curse is viciously wounding her while she sleeps. As Kit investigates the Walsh family, she becomes convinced that the attacks are part of a more ominous plot—one that may involve the lady’s obnoxious husband.

Sleuthing in the city of Rumsen is difficult enough, but soon Kit must also skirt the unwanted attentions of a nefarious deathmage and the unwelcome scrutiny of the police chief inspector. Unwilling to surrender to either man’s passion for her, Kit struggles to remain independent as she draws closer to the heart of the mystery. For the truth promises to ruin her life—and turn Rumsen into a supernatural battleground from which no one will escape alive.

Ocyrhoe, a young, cunning fugitive from Rome, safeguards a chalice of subtle but great power. Finding herself in France, she allies with the persecuted, pacifist Cathar sect in their legendary mountaintop stronghold, Montségur. There she resists agents of the Roman Church and its Inquisition, fights off escalating, bloody besiegement by troops of the King of France, and shields the mysterious cup from the designs of many.

Percival, the heroic Shield-Brethren knight from The Mongoliad, consumed by his mystical visions of the Holy Grail, is also drawn to Montségur—where the chalice holds the key to his destiny.

Arrayed against Percival and Ocyrhoe are enemies both old and new who are determined to reveal the secrets of the Shield-Brethren with the hope of destroying the order once and for all.

Alive with memorable characters, intense with action and intrigue, Siege Perilous conjures a medieval world where the forces of faith confront the forces of fear. Choices made by characters in The Mongoliad reach their ultimate conclusion in this fifth and concluding novel—and all of Christendom is at stake.

An electrifying paranormal romance . . . with a twist!

Only rebellious Demi Ward could be bored with her life as a contortionist in Criminy Stain’s magical traveling circus. But being a cabaret star in the City of Light is dangerous . . . especially for an audacious Bludman.

After Demi’s best friend, Cherie, is brutally kidnapped en route to Paris by a roving band of masked slavers, passionate highwayman Vale Hildebrand shows up to save the day. With his help, Demi rises to the top of the cabaret scene as part of her plot to find Cherie—but what she really discovers is a taste for Vale’s kisses. Meanwhile, wealthy suitors vie for a night of her charms, crowding the glittering club where Demi commands the stage with a host of colorful daimons. She is soon seduced by a smoldering portrait artist whose ties to a secret society could be the break she and Vale need on their hunt. But—unlike the Paris that Demi read about in college on Earth—the Paris of Sang is full of depraved pleasures and deadly surprises... 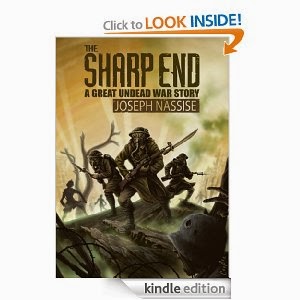 The zombie apocalypse meets World War One in this exciting prequel story to BY THE BLOOD OF HEROES, book one in the Great Undead War alternate history series!

March 1921. The War to End All Wars continues, with no foreseeable end in sight. The Central Powers control most of Europe, with only a thin stretch of French coastline still in Allied hands. A beleaguered Britain fights resolutely on, but everyone knows that without the continued support of the United States it would fall within weeks. Even that may not be enough to defeat the brilliance of the Central Powers' scientists and the advantages their advanced weapons give their troops as wave after wave of zombie soldiers are sent against the Allied front lines...

On May 1st, 2012 HarperVoyager released BY THE BLOOD OF HEROES, the first book in the new zombie steampunk alternate history series known as The Great Undead War by internationally bestselling author, Joseph Nassise.

Here, for the first time, is the story behind the story. Follow the hero of The Great Undead War zombie apocalypse series, Captain Michael "Madman" Burke, leader of Burke's Marauders, in the early days of the war, when the Germans are just beginning their field tests of a new weapon.

A weapon that will eventually come to change the face of the war itself, that will resurrect the bodies of the dead, both friend and foe alike, and turn them into flesh-eating monsters. A weapon that will come to be known as corpse gas.