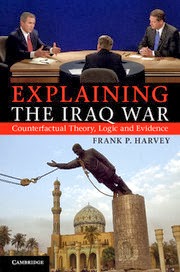 I have a new book coming up for review. It is called Explaining the Iraq War: Counterfactual Theory, Logic and Evidence by Frank Harvey. Here is the description from Amazon:


The almost universally accepted explanation for the Iraq war is very clear and consistent - the US decision to attack Saddam Hussein's regime on March 19, 2003 was a product of the ideological agenda, misguided priorities, intentional deceptions and grand strategies of President George W. Bush and prominent 'neoconservatives' and 'unilateralists' on his national security team. Despite the widespread appeal of this version of history, Frank P. Harvey argues that it remains an unsubstantiated assertion and an underdeveloped argument without a logical foundation. His book aims to provide a historically grounded account of the events and strategies which pushed the US-UK coalition towards war. The analysis is based on both factual and counterfactual evidence, combines causal mechanisms derived from multiple levels of analysis and ultimately confirms the role of path dependence and momentum as a much stronger explanation for the sequence of decisions that led to war.

The description doesn't do a great job explaining the counterfactual aspect of this book: a timeline where Al Gore becomes president in 2000. Frank was kind enough to send me a copy. Although we have seen this POD recently in 43* by Jeff Greenfield, this book takes a more scholarly approach to the subject.

The book was recently reviewed by Andrew Steele of the Globe and Mail who said: "The results of Harvey’s work are chilling to modern students of history if the seeds of Iraq are found in the well-intentioned humanitarian interventions of Bosnia and Kosovo as much as any thirst for oil or pathological need to make daddy proud." The book was also the subject of a roundtable discussion in September at the Miller Centre of Public Policy (University of Virginia).

While many of you know I try to not to get overly political on The Update, a part of people can't help but read this book because it represents one of the positives of alternate/counterfactual history: an alternative way of teaching history. I look forward to reading it and I hope you enjoy the review.