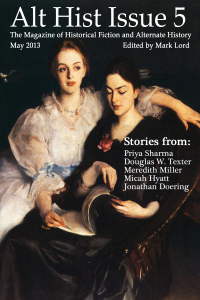 Being a sub-genre of science fiction, you tend to see an occasional alternate history short story in a SF magazine. Still it does not happen as often as I would like. Are the editors to blame? Do they reject an inordinate amount of alternate history submissions? Or are the authors to blame? Does the lack of historical knowledge among SF writers prevent a larger short fiction library? Maybe it is the audience. They just aren't reading the stories.

That is why I like Alt Hist. It is probably the only publication out there that consistently publishes alternate history. That being said, the magazine could better be described as a publisher of alternative or weird history. Along with pure alternate history, there is steampunk, historical fantasy, time travel and even regular, old historical fiction. Still for those who like their speculative fiction having a historical flavor, you should check out Alt Hist.

The most recent issue (#5) is a solid entry with a few good stories. I didn't particularly enjoy "The Stiff Heart" by Meredith Miller, a tale of post-Civil War New England. It was an odd read that is overly poetic and can be confusing when the point of view changes to second person at one point. Another story you can pass on is "AD 1929" by Douglas W. Texter where F.T. Marinetti convinces Al Capone to go into politics. The portrayal of several historical figures and the era in general was so over the top that it entered the realm of implausibility.

Despite those goose eggs, there were still several good stories you could check out. "After Mary" by Priya Sharma was a unique tale of a Frankenstein-esque character and his "monster" with enough twists and turns that the ending is unexpected. "The Bridge" by Micah Hyatt was a neat story about the construction of a suspension bridge and its connection to a biblical horror.

Then there is "Rotten Parchment Bonds", another entry in Jonathan Doering's the Battalion 202 series that appeared in the previous issue of Alt Hist. It is another story happening in the same British town under occupation by the Germans in World War II. I can already hear the plausibility hounds barking, but it is an good story about how regular people deal with extraordinary circumstances. If you can suspend some disbelief, I think you might enjoy it. One wonders how many more entries we will see and whether Doering has plans for a full novel...

Although there are a couple of stories that can be skipped, Alt Hist 5 was still an enjoyable read. Hopefully more alternate historians will support this publication so we will not need to wait so long for the next issue.