Well I am back from Washington, DC. It was a great trip. My nation's capital is a treasure trove of American history and, surprisingly, foreign culture and cuisine. My wife and I had an amazing time, but I'm glad to be back home.

I even found a lot of inspiration for potential PODs when walking around the city. From a different Washington architecture based on the mind of Frank Lloyd Wright, to the currency that could have been used by the different states in a balkanized North America and even what a Soviet cosmonaut would have looked like on the Moon.

Yes, even on vacation, I can't get my mind out of the multiverse. Sadly my hope of bringing you a massive, even epic, Weekly Update has met the reality of what happens when you have a tired and sore Mitro. So not as much commentary today, but still some interesting press releases and a lot of links. Enjoy.

Announced at San Diego Comic-Con, Lavie Tidhar (author of the World Fantasy Award winning Osama) will be writing a five-part creator-owned mini-series for Titan Comics for release next year.

Adler has been described by Titan as “ladies of literature action-adventure” and “The League of Extraordinary Gentlewomen”. It focuses on Irene Adler as the titular character, with a host of other female figures from classic Victorian literature.

Tidhar said, “I felt disgruntled enough with recent depictions of Irene Adler (in films/tv) as a sort of Sherlock/Moriarty plaything, to actually do something about it – and in some miraculous way, it worked!” Tidhar described the project as “a predominantly a fun (I hope!) self-contained serial (it will be collected into a trade graphic novel at the end of the run), kind of steampunky, with a vibe a little similar to the Bookman novels.”

He will be working with artist Paul McCaffrey (Zombies Vs. Robots, TMNT: The Fugitoid). The two had previously collaborated on adult picture book Going To The Moon, about a boy with Tourette’s who wants to become an astronaut. 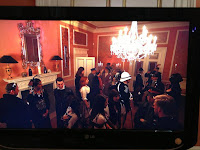 "Ranjana", a Bournemouth University postgraduate student, is producing a short steampunk drama for his Masters project. It's a short 20-minute film called Revelations. It has been described as "a Neo-Victorian style love story with Cyberpunk elements, which makes it a Jane Austin-esque costume drama that is more accessible, entertaining and interesting to those who might be more into Sci-Fi, the subculture or just curious in general."

The film is set in an alternate history where World War I never ended and the UK is running on a war economy. The story follows Amelia, who has found herself helplessly stuck within the oppressive walls of status, fueled by her authoritarian mother, Jane; her love interest, Cassius, who has recently returned from the war; and his rival, Hugo, the high ranking corporate official whom Jane adores. Amelia struggles to satisfy her duty as a daughter as well as her duty to herself and satisfying her own wants and needs. Below is a more detailed description:


Within a grand countryside estate, resides a girl full of melancholy. Amelia Grayson sits day in and day out, waiting for the news that will tell her whether her soldier boyfriend, Cassius Verne is dead or alive. But now, Amelia’s mother, Jane will not allow her daughter to revel in her depression any longer. Jane arranges a ‘reveal party’ and for her to court Hugo Wells, a high-ranking military official. When Cassius miraculously returns from the war unscathed, Amelia rebels against her mother’s wishes only to witness Jane exercising the full extent of her powers over her. She will wed Hugo Wells, or report Cassius as AWOL. Defeated, Amelia sinks back into depression as she attends the ball and courts Hugo Wells, when an unexpected face shows attendance, revealing bigger truths than Amelia could ever imagine and sends everything into chaos.

According to Ranjana, the film blends a lot of themes, including love and coming of age, but with a steampunk aesthetic. I look forward to learning more about Revelations in the future. You can learn more about it on Facebook, Twitter and Google+.

Europa Universalis IV is almost here! The newest entry in the grandest strategy series (God, I still remember playing EU I) is coming this summer on August 13, and will challenge conquerors everywhere to build their empires using expanded mechanics for religion, exploration, diplomacy, conquest, and more. A pre-order edition is available with special features not available when the game is finally released, including a Saved Game Converter for Crusader Kings II, which will read the details of a saved game from a Crusader Kings II and convert that into a game that can be played in Europa Universalis IV.

Do you want to know more? Although the game gives you plenty of non-violent means to spread your borders around the globe, lets face it, we all like declaring war. A new developer diary showcases the wide world of open warfare in Europa Universalis IV, including the dire costs of protracted battle on your fledgling empire – such as money, manpower, and morale.
Europa Universalis IV Project Lead Thomas Johansson may not be an armchair general, though he does sit in an armchair as he explains the nuances of war strategy in this latest video diary. Paradox Development Studio has changed the pace, the balance, and the consequences of warfare in their latest creation, challenging tacticians everywhere to keep their nations together during times of strife. What price are you willing to pay to see your enemies slaughtered?

November 22-23: A two-night burlesque performance is planned for Haworth, UK to coincide with a Steampunk weekend.

5 Writing Exercises That Will Make You More Creative by Robert Brockway at Cracked.
1636: The Devil’s Opera – Snippet 25 and 30 by Eric Flint.
2013 Scribe Award Winners at SF Scope.
Adventures in Alternate History: Steampunking the Mormon Battalion by Suzanne Lazear at Steamed.
Cherie Priest Cover Reveal: Fiddlehead at Tor Books Blog.
Cover & Synopsis: “V-S Day: A Novel of Alternate History” by Allen Steele at SF Signal.
Does Steampunk Promote Violence? by Balogun at Chronicles of Harriet.
Excerpt Thursday: Thieves' Quarry by D. B. Jackson at Unusual Historicals.
Historical Science in Science Fiction by EH Kern at The Boomerang.
Ian's Top Ten Parallel Universes (Part 2) at Jo Fletcher Books.
If this theory is correct, we may live in a web of alternate timelines by George Dvorsky at io9.
INCEPTIO shortlisted for book award! by Alison Morton.
Kay Kenyon Brings a Sweeping Historical Fantasy Set in a Re-Imagined 19th Century in A Thousand Perfect Things at PR Web.
MMA Alternate History: What if Gina Carano Beat Cris Cyborg in 2009? by Matt Saccaro at Cage Potato.
More Information - Jay Lake's Process of Writing at Apocalypse Ink Productions.
Obama and the Economy: What Could Have Been by Josh Kraushaar at National Journal.
Punk'd by Obama and that Old Hobbit John McCain by John Ransom at Townhall Finance.
Steampunk 101: From Sci-Fi Sub-genre to Cultural Phenomenon by Scott Laming at Abe Books.
Steampunk Fashion In Popular Culture at Look Hunting.
When Counterfactuals Go Bad by Jonathan Bernstein at A plain blog about politics.
Why can't women time travel? by Anna Smith at The Guardian.

The Art of Steampunk by Art Donovan at Unleash the Fanboy.
Brilliance by Marcus Sakey at io9.
Cold Steel by Kate Elliott at Falcata Times.
Himmler's War by Robert Conroy at Amazing Stories.
Storm Surge by Taylor Anderson at The Guilded Earlobe.
Theatre of the Gods by Matt Sudain at Falcata Times.
Thieftaker by D.B. Jackson at The Ranting Dragon.
Three Parts Dead by Max Gladstone at Mind of the Geek.

Laika Believes pits one dog against an alternative history of Soviet Russia by Emily Gera at Polygon.

5 Iconic Scenes from History Everyone Pictures Incorrectly by Robin O'Lachlan at Cracked.
5 Myths You Probably Believe About Famous Landmarks by C. Coville and Ivan Farkas at Cracked.
Counterfactualis Interruptus by Gavriel D. Rosenfeld at The Counterfactual History Review.
J.K. Rowling Revealed To Be Pseudonym For Newt Gingrich at The Onion.

Blu-ray Review: Justice League: The Flashpoint Paradox by Steve Anderson at Technology Tell.
The Butterfly Effect gets a reboot for reasons we can't comprehend by Meredith Woerner at io9.
SDCC 2013: I, Frankenstein at Nerd HQ by Sharlene Mousfar at Geek Syndicate.