So did I mention last month we reach 22,031 page views? That is the highest monthly page view count in The Update's history. Thank you to all of the contributors and fans who made this possible. I couldn't have asked for a better gift to mark our two year anniversary. I look forward to exceeding all expectations when we break that record again!

This week I am taking July 4th off so a little less speculative goodness is coming your way. No worries, I think you will enjoy what I have in store for you, which includes announcing the winners of the DBWI contest and The Place of Dead Kings book giveaway.

So last week I shared some info on The Daedalus Incident by Michael J. Martinez. For those who missed it, here is the description from Amazon:

Mars is supposed to be dead…

Bizarre quakes are rumbling over the long-dormant tectonic plates of the planet, disrupting its trillion-dollar mining operations and driving scientists past the edges of theory and reason. However, when rocks shake off their ancient dust and begin to roll—seemingly of their own volition—carving canals as they converge to form a towering structure amid the ruddy terrain, Lt. Jain and her JSC team realize that their routine geological survey of a Martian cave system is anything but. The only clues they have stem from the emissions of a mysterious blue radiation, and a 300-year-old journal that is writing itself.

Lt. Thomas Weatherby of His Majesty’s Royal Navy is an honest 18th-century man of modest beginnings, doing his part for King and Country aboard the HMS Daedalus, a frigate sailing the high seas between continents…and the immense Void between the Known Worlds.

With the aid of his fierce captain, a drug-addled alchemist, and a servant girl with a remarkable past, Weatherby must track a great and powerful mystic, who has embarked upon a sinister quest to upset the balance of the planets—the consequences of which may reach far beyond the Solar System, threatening the very fabric of space itself.

Since sharing with you what I found out about this book, the Internet has exploded with content on The Daedalus Incident. Paul Weimer at SF Signal called it "[a]n ambitious and fun romp whose enthusiasm outweighs its flaws." Justin Landon at Staffer's Book Review also wrote a (sort-of) review where he said "I really enjoyed it despite an extremely unconventional narrative."

What I have read about this book intrigues me greatly and I have moved it near the top of my reading list and have contacted Michael J. Martinez to get the ball rolling on an interview, so stay tuned for that. In the meantime, you can check out an excerpt of the book at Tor.com, listed to an interview with Mike at the always good SF Signal Podcast and read's Mike guest post on Staffer's Book Review entitled "Napoleonic Bechdel Tests".

"We Are The World" Campaign Initiated for East vs. West: A Hearts of Iron Game 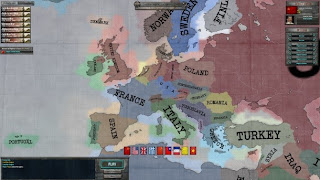 Paradox Interactive kicked off the start of the “We Are The World” campaign for East vs. West: A Hearts of Iron Game, an upcoming Cold War simulation game developed by BL-Logic in collaboration with Paradox Development Studio. New screenshots for the title have also been released and the game’s official website has launched.

The "We Are The World" campaign will allow players to create and submit their own historical or alternate history character for East vs. West, with the favorites picked by the devs to be used in-game. Will your leader be a benevolent soul with a fervent vision of unity or will they be a ruthless dictator bent on the nuclear destruction? Players are encouraged to participate and help shape the mold of East vs. West during its development and can even submit pictures of themselves.

For those who don't know, East vs. West: A Hearts of Iron Game takes place during the Cold War era between 1946-1991. Crafted by BL-Logic with the support of a dedicated group of modders and in collaboration with Paradox Development Studio, the game is based on the Clausewitz engine and allows players to relive the diplomatic, economical and military tension of the Cold War in this grand strategy game. Bring issues before the U.N. Security Council, plot the removal of foreign leaders, initiate espionage to stay ahead of your rivals, and, above all else, prepare your country for nuclear war.

East vs. West: A Hearts of Iron Game is currently slated for a Q1 2014 release. For more information, check out the recent stream for the game and the developer diaries.

Cover & Synopsis: ONCE UPON A TIME IN HELL by Guy Adams at SF Signal.
Excerpt: SORCERER: A Novel of Queen Elizabeth’s Alchemist by Geoffrey James at Amazing Stories.
Jim Musgrave Releases Mystery Series DISAPPEARANCE AT MOUNT SINAI at BooksWorld.com.
Steampunk Quips and Tips by Maeve Alpin at Smart Girls Love Sci Fi and Paranormal Romance.
Time for a trip to the dark side for new paranormal reads by Joyce Lamb at USA Today.
What did I learn from preparing Book 2? by Alison Morton.

Apex Magazine, Issue 49, June 2013 at SF Signal.
Be My Enemy by Ian McDonald at Falcata Times.
Leviathan by Scott Westerfeld at book!
The Long War and The Long Earth by Terry Pratchett and Stephen Baxter at Barnes & Noble Review.
Oz Reimagined edited by John Joseph Adams and Douglas Cohen at Travels Through Iest.
The Revolution Trade by Charles Stross at Falcata Times.
Without a Summer by Mary Robinette Kowal at Thinking about books.

10 ‘What Ifs’ That Could Have Changed The Course Of Doctor Who by James T. Cornish at WhatCulture!
Dave would not have become PM if he’d held out for a minority Conservative government by Mike Smithson at Politicalbetting.com.

Robert McCammon on his blog.

Instead of Monsters University we could have had a Monsters Inc sequel by Lauren Davis at io9.
Real-Life Magazines Portrayed As If the Avengers Were Real at Geeks are Sexy.

Hotline Miami Devs Reboot Steampunk Chaos Engine by Adam Gauntlett at The Escapist.
Laika Believes: The Sun at Night offers an alternate history of dogs in space by Emily Gera at Polygon.
MicroVolts Releases a Steampunk Fantasy Update at MPOGD.com.
Wolfenstein: The New Order – Trailer by Gameuber Trailers.
A Zombie Steampunk Wizard Of Oz? Sure, Why Not. by Luke Plunkett at Kotaku.

A Thin Line Between Revolution and Confusion by Madeline Barnicle at Fantasy Matters.

Email ThisBlogThis!Share to TwitterShare to FacebookShare to Pinterest
Labels: calender, East vs West, Hearts of Iron, Michael J. Martinez, The Daedalus Incident, We Are The World, Weekly Update