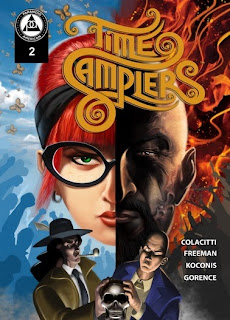 I have finished the next chapter in the psychedelic time travel/conspiracy theory saga, Time Samplers, and before I begin, I need to give a special thanks to Paranoid American for giving me an opportunity to review their work. I read it on my Kindle Fire which I have to admit is my new favorite way to read comics, but more on that another time.

We find our heroic team of bros, Lex and Cal, still stuck in the W.I.L.D. Machine, the device that lets them recreate and visit the past. As reality breaks around them, Carmot and Vodnar try to rescue the brothers from the machine by sending them to a Skull & Bones ritual in the Tomb at Yale. Meanwhile, a new character, Luna, is introduced and immediately becomes the puppet of the shadowy figure causing chaos throughout the country.

The series continues to be humorous and delightfully weird, but I was left with more questions than answers. Who is Luna? Who is the shadowy figure controlling her? What is the council? I also feel I don't know much about the existing characters and I hope that futures issues might focus on them, especially Lex and Cal.

Alternate historians might be put off by all of the secret history, but that doesn't mean you shouldn't give it a chance. Numerous alternate histories reviewed on The Update have been inspired by conspiracy theories including Prologue by Greg Ahlgren (see John F. Kennedy assassination conspiracy theories) and the 2012 Sidewise nominated short story "Adrift on the Sea of Rains" by Ian Sales ("The Bell"). So if you are looking for a well-done indie comic that makes use of tropes common in alternate histories, give Time Samplers a shot.