Yes, I failed to post an article on both Thursday and Friday. Sorry guys but I just did not want to post anything unless it was something worthwhile.  Hopefully today's Weekly Update will make up for it. The good news is despite my two bad weeks last month, The Update reached 13,797 hits. That is our third best month in our almost two years of existence. So good to know we are getting back on track.

Holy crap, is it really number 97?!?! I am just a few weeks away from breaking 100! I wonder if I should do anything special to mark the occasion...


The Empire State is dying. The Fissure connecting the pocket universe to New York has vanished, plunging the city into a deep freeze and the populace are demanding a return to Prohibition and rationing as energy supplies dwindle.

You can check out an extract from the novel at the Angry Robot website. Meanwhile, if you would like to learn more about the author and his works, you can read the interviews he did with Chuck Wendig,  Lawrence Schoen, Mary Robinette Kowal and a little known cable television channel called CNN.

Hope you had a happy release day Adam!

Update: The Good, The Bad and the Infernal by Guy Adams

Last week also saw the release of The Good, The Bad and the Infernal by Guy Adams. Here is the description from the interview Guy Adams did at My Bookish Ways:


“You wish to meet your God?” the gunslinger asked, cocking his revolver, “well now… that’s easy to arrange.”

But should you read it? Falcata Times was less than impressed saying "it’s a Guy Adams novel...clipped prose, some cracking turns of phrase and of course some dialogue that hangs around in your mind, but all round, it just wasn’t a book that took me on the journey into the unknown that I was wanting."

O well, not every AH book will be a hit.

Those interested in the Milkweed series by Ian Tregillis will be happy to know the first book in the series, Bitter Seeds, is now only $2.99. Here is the description from Pat's Fantasy Hotlist:


It’s 1939. The Nazis have supermen, the British have demons, and one perfectly normal man gets caught in between.

Raybould Marsh is a British secret agent in the early days of the Second World War, haunted by something strange he saw on a mission during the Spanish Civil War: a German woman with wires going into her head who looked at him as if she knew him.

When the Nazis start running missions with people who have unnatural abilities—a woman who can turn invisible, a man who can walk through walls, and the woman Marsh saw in Spain who can use her knowledge of the future to twist the present—Marsh is the man who has to face them. He rallies the secret warlocks of Britain to hold the impending invasion at bay. But magic always exacts a price. Eventually, the sacrifice necessary to defeat the enemy will be as terrible as outright loss would be.

Alan Furst meets Alan Moore in the opening of an epic of supernatural alternate history, the tale of a twentieth century like ours and also profoundly different.

At the publisher's request, this title is being sold without Digital Rights Management software (DRM) applied.

After you are done reading Bitter Seeds, you should check out the sequel The Coldest War, which Elfy from Travels Through Iest called "very very good and probably the book of the year so far for me." How can you say no to praise like that?

Paradox Interactive made an interesting announcement that aspiring authors (especially fans of video games and history) should take note of. The global PC strategy games publisher will be branching out to book publishing with a new e-book initiative called “Paradox Books”.

“We’ve spent more than a decade creating and telling compelling stories through our computer games, stories that have engaged and captivated people from all parts of the globe, and books are just another medium to get those stories out there and engage with our audience,” said Fredrik Wester, CEO of Paradox Interactive. “Add to that the fact that our company was founded on pen and paper role-playing games and books, and that we have several published authors amongst our ranks here at Paradox, so this felt like a very natural progression for us.”

Three books will be available under Paradox Books initially, and several more have been signed and will be distributed later in the year. The books will broach everything from biographical behind the scenes books to game strategy guides to fiction and novels. The inaugural round of books to be made available will include: A Year with Mojang: Behind the Scenes of Minecraft by Tomas Arnroth, The Communist Campaign in Karelia - A Hearts of Iron III Strategy Guide by Jason Pitruzzello and Coriolis by Mattias Lilja. 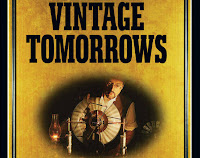 April 10: "How to Change the Future" address by Brian David Johnson, author of Vintage Tomorrows: A Historian And A Futurist Journey Through Steampunk Into The Future of Technology at the San Francisco 2013 conference.

April 24: The last day to fund Time Soldiers, the WWII Board Game by Ray Shingler, on Kickstarter.

And for steampunk fans, check out Tor's list of steampunk events for April.

The Abuse of Counterfactual History (10 Years After, Cont’d) by CK MacLeod.

Cover & Synopsis: “The Doctor and the Dinosaurs” by Mike Resnick (+ A Weird Western Cover Gallery) at SF Signal.

Did You Know?: 13 Moments In Alternate History by Trevor Abes at Buzz Feed.

King of Trees by Carmen Webster Buxton at An Eclectic Bookshelf.

Vintage Tomorrows by James H. Carrott and Brian David Johnson at BC Books.

The Land of Oz to get a Steampunk makeover for Free Comic Book Day at Flickering Myth.

'ID4' Sequels To Have Alternate History Where Will Smith's Son Pushed to Prominency, Which Doesn't Really Sound That Different at I Watch Stuff.

Couldn't Score a Copy of BioShock Infinite? Try Out These Other Alternate History Franchises! by Christopher Groux at Quick Jump.