Preview: The Place of Dead Kings by Geoffrey Wilson 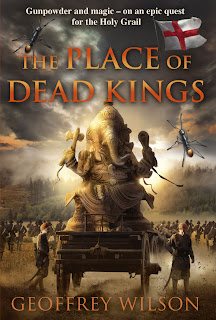 Got a new book to review that I am super excited about. Some of you may remember Land of Hope and Glory by Geoffrey Wilson a novel set in a world where the Indian Mutiny takes place in a very different England, where magic is a weapon controlled by her foreign oppressors.

Publishers Weekly called it an "impressive debut [that] fuses fantasy with alternate history, reversing the British Empire's conquest of India. Wilson's version of 19th-century England has been invaded and conquered by the Indian empire of Rajthana, which rules all of Europe with vast armies and a magical source known as sattva...The mix of Arthurian legend and Hindu mysticism make this breakneck-paced adventure a rich and engaging read.”

Well now the sequel to the book is out: The Place of Dead Kings. Published last month in paperback, check out the description I got from the publisher:

Geoff was kind enough to score me a copy, but I will be posting the actual review over on Amazing Stories during my upcoming series on steampunk. Don't worry, if you follow The Update on Facebook or Twitter, you will know when the review is posted. In the meantime you can purchase The Place of Dead Kings on Amazon and Amazon.uk.

And if I like the book, we may even hold a giveaway. We shall see...