Woot! Another mention on SF Signal for my work on Amazing Stories. Okay that is enough shameless self-promotion.

Don't forget everyone, we are still accepting original fiction, essays and reviews dealing with the Balkanize Me trope of alternate history. I will be posting the next entry later this week so stay tuned. Also there is still time to send in your submissions for the steampunk writing contest in March. I look forward to reading your submissions.

New reader from the Bahamas, welcome! Why is there terrible weather in Chicago every time I have to welcome a new reader from a tropical country?

Star Trek & Dr. Who Fans Might Collide with a Bang! Theoretically of Course

Remember when I said I was through with the shameless self-promotion? Yeah not exactly.

Amazing Stories is pleased to announce their first piece of new fiction, and a graphic story to boot!  But wait, it gets even better!

Several weeks ago David Gerrold (yes, the Tribbles guy*) announced on Facebook that he’d written a comic book script that had become orphaned through no fault of its own.  Amazing Stories jumped on this potential opportunity and obtained a copy of the script for review.

From the opening panel to the very last David Gerrold has spun a tale of historic, inside jokiness and has extended that joke to encompass contemporary fare.

Arrangements were made for Amazing Stories to publish the story and, in conjunction with David’s DG Publishing imprint, produce a limited dead-tree edition. Several comic artists were approached for the honor and Troy Boyle has been given the go-ahead.  Troy has already begun preliminary character sketches and page layouts.

Amazing Stories will be publishing a few teaser excerpts from the script, as well as some of Troy’s preliminary artwork here over the next few weeks.

This Friday Amazing Stories will be releasing a few of Troy’s illustrations and a few scenes from David’s script, so mark it on your calendars and don’t miss a single reveal as we all work our way towards publication!

The script will appear here exclusively on Amazing Stories and will also be made available in a limited print edition that will be available from the Experimenter Publishing Company and DG Publishing.

So if you guys liked Assimilation, I highly recommend you check out what Amazing Stories has in stores for you this Friday. Plus you never know if another major franchise might make an appearance...

Update: The Queen is Dead by Kate Locke

The newest edition to the Immortal Empire series was released last week, but here is the description in case you missed it:


When her brother Val gets in over his head in an investigation of Half-Blood disappearances and goes missing himself, it's up to Xandra, newly crowned Goblin Queen, to get him back and bring the atrocities to light. Xandra must frequent the seediest parts of London, while also coping with what she is, the political factions vying for her favor, and the all too-close scrutiny of Queen Victoria, who wants her head. Add this to a being a suspect in a murder investigation, a werewolf boyfriend with demands of his own, and a mother hell bent on destroying the monarchy, and Xandra barely knows which way is up. One thing she does know is that she's already lost one sibling, she's not about to lose another.

Xandra Varden is the newly crowned Goblin Queen of England. But her complicated life is by no means over.

There are the political factions vying for her favor, and the all too-close scrutiny of Queen Victoria, who for some reason wants her head. Not to mention her werewolf boyfriend with demands of his own, and a mother hell bent on destroying the monarchy. Now she's the suspect in a murder investigation --- and Xandra barely knows which way is up.

What she does know is that nothing lasts forever---and immortality isn't all its cracked up to be.

If you want to get more background information on the Immortal Empire universe check out Locke's description of the world on RT Book Reviews and see a brief timeline of important events she posted at Orbit Books.

Do you know who Lavie Tidhar is? Well you should. This award-winning, alternate history author has made quite a name from himself. Here is a brief bio:


Lavie Tidhar grew up on a kibbutz in Israel and has since lived in South Africa, the UK, Vanuatu and Laos. He is currently residing back in London. He won the World Fantasy Award in 2012 for Best Novel, for Osama, and the British Fantasy Award 2012 for Best Novella, for Gorel & The Pot-Bellied God. He was nominated, variously, a BSFA Award, a Sidewise Award, Israel’s Geffen Award, the Airship Award, and the Sturgeon and Campbell Awards.

Got a whole heaping helping of news for grand strategy gamers. Let's start with the unstoppable pagan armies! 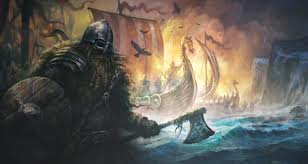 Paradox Interactive and Paradox Development Studio, announced the new expansion to the world of Crusader Kings II titled Crusader Kings II: The Old Gods. The new expansion will add a number of widely requested features to the game, including the ability to play as a Pagan or Zoroastrian ruler, expanding empires through war, pillaging, and ruthless brutality. Players will also be able to begin their in-game reign as far back as the year 867 AD, making The Old Gods officially the Paradox title that spans the longest period in history.

Crusader Kings II: The Old Gods lets players step into the boots of a pagan chieftain, approaching the brutal backstabbing world of Crusader Kings through invasion, adventure, and holy war. Other features include rebels being led by defined characters with specific agendas, adventurers, heathens, prepared invasion and a new AI.

Crusader Kings II: The Old Gods is scheduled to release in Q2 2013. Watch the announcement teaser trailer below:
Next we have Heart of Darkness, the second expansion for Paradox Development Studios’ Victoria II, a detailed political/economic simulation of the Victorian Age, an era of rapid transformation of technology, politics and business.

Heart of Darkness, as its name suggests, focuses on the Scramble for Africa, the late 19th century rush for newly discovered wealth and land in a continent whose interior had been mostly free from European domination.

The upcoming expansion also introduces a new diplomatic event, International Crises, where the colliding desires of rival empires get settled by Great Power mediation and where smaller powers can manipulate their friends to support their own local ambitions. Other features include a new naval system with greater detail in battles, including gun ranges and positioning, and more types of ships to bridge the gap between ironclads and dreadnoughts. There will also be a newspaper system will allow you to track all the most important events in your world instead of relying on the game log.

Victoria II: Heart of Darkness is scheduled for release in March 2013. Finally we end this segment with a host of new trailers starting with March of Eagles:
And Europa Universalis IV:
Try to get some sunlight guys.

Need more opportunities to get published?

First, I have two publishers looking for flash fiction submissions. Fan of our favorite cephalopod should check out Whispers From the Abyss, a Lovecraftian flash fiction anthology open for submission until May 30. Stories should not be longer than 2500 words.

Next we have the Teleport Us writing contest over at Lit Reactor. They are looking for stories between 1500-4000 words with a dystopic/utopian setting and featuring plausible technology and non-human characters. You will have to hurry, however, as the submission period ends at the end of February.

Those with longer works should check out Farther Books. This SF publisher is looking for completed manuscripts. Full guidelines can be found here.

Remind me when I get the time to sit down and make a calender for all of these events I mention. In the meantime, here are some more alternate history inspired things to do:

March 9: Alan Moore & Kevin O’Neill will be at Gosh! Comics to promote the new League of Extraordinary Gentlemen book.

August 23: NecronomiCon. the Lovecraft convention, in Providence, RI. Tickets are now on sale.

If you need more idea check out the SF Signal Podcast where Patrick Hester talks about upcoming SF conventions with a panel of prominent female SF authors.

Five Ways an Automaton Gunslinger Can Improve Your Quality of Life by Heather Massey at SF Signal.

1984: George Orwell's road to dystopia by David Aaronovitch at BBC.

Jules Verne’s Love of Adventure Took Us From the Center of the Earth to the Surface of the Moon at Tor.

Steampunk Update, Part 1 - Following Up by John DeNardo at Kirkus.

When I Want Time Travel by Michael A. Burstein at Mabfan's Musings.

The Aylesford Skull by James P. Blaylock at Dab of Darkness.

A Conspiracy of Alchemists by Liesel Schwartz at Falcata Times.

The Eyre Affair by Jasper Fforde at Wilder's Book Review.

The Friday Society by Adrienne Kress at Steampunk Scholar.

The Warlord of the Air by Michael Moorcock at TG Daily.

Review of Midnight in Paris done by Paul Levinson.

Gail Carriger at My Bookish Ways.

Ian Tregillis in conversation with Charlie Stross on The Laundry Files at Orbit.

Cherie Priest (plus an excerpt from The Inexplicables) at Tor.

Jeff Provine at School of Ages.

Review of Elementary: Season 1, Episode 14. The Deductionist at Thinking about books.