The Afrika Reich by Guy Saville

Africa, 1952. More than a decade has passed since Britain’s humiliation at Dunkirk brought an end to the war and the beginning of an uneasy peace with Hitler.

The swastika flies from the Sahara to the Indian Ocean. Britain and a victorious Nazi Germany have divided the continent. The SS has crushed the native populations and forced them into labor. Gleaming autobahns bisect the jungle, jet fighters patrol the skies. For almost a decade an uneasy peace has ensued.

Sent to curb his ambitions is Burton Cole: a one-time assassin torn between the woman he loves and settling an old score with Hochburg. If he fails unimaginable horrors will be unleashed on the continent. No one – black or white – will be spared.

But when his mission turns to disaster, Burton must flee for his life.

It is a flight that will take him from the unholy ground of Kongo to SS slave camps to war-torn Angola – and finally a conspiracy that leads to the dark heart of The Afrika Reich itself.

Check out Seb's review and his conversation with Guy in the comment section. 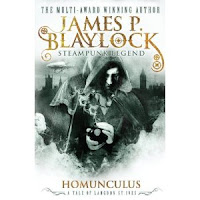 It is the late 19th century and a mysterious airship orbits through the foggy skies. Its terrible secrets are sought by many, including the Royal Society, a fraudulent evangelist, a fiendish vivisectionist, an evil millionaire and an assorted group led by the scientist and explorer Professor Langdon St. Ives.

Can St. Ives keep the alien homunculus out of the claws of the villainous Ignacio Narbondo?

The Mirage by Matt Ruff

11/9/2001: Christian fundamentalists hijack four jetliners. They fly two into the Tigris & Euphrates World Trade Towers in Baghdad, and a third into the Arab Defense Ministry in Riyadh. The fourth plane, believed to be bound for Mecca, is brought down by its passengers. The United Arab States declares a War on Terror. Arabian and Persian troops invade the Eastern Seaboard and establish a Green Zone in Washington, D.C. . . .

Summer, 2009: Arab Homeland Security agent Mustafa al Baghdadi interrogates a captured suicide bomber. The prisoner claims that the world they are living in is a mirage—in the real world, America is a superpower, and the Arab states are just a collection of "backward third-world countries." Other captured terrorists have been telling the same story.

The gangster Saddam Hussein is conducting his own investigation. And the head of the Senate Intelligence Committee—a war hero named Osama bin Laden—will stop at nothing to hide the truth. As Mustafa and his colleagues venture deeper into the unsettling world of terrorism, politics, and espionage, they are confronted with questions without any rational answers, and the terrifying possibility that their world is not what it seems.

Check out Brian's review of the novel. 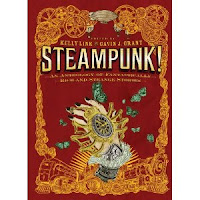 Imagine an alternate universe where tinkerers and dreamers craft and re-craft a world of automatons, clockworks, calculating machines, and other marvels that never were. Visionaries Kelly Link and Gavin J. Grant have taken a genre already rich, strange, and inventive and challenged fourteen masters of speculative fiction, including two graphic storytellers, to embrace its established themes and refashion them in surprising ways and settings. The result is an anthology that defies its genre even as it defines it.

1635: The Papal Stakes by Charles E. Gannon and Eric Flint

Rome in the year 1635 finds Frank Stone and his pregnant wife Giovanna in the clutches of Cardinal Borgia, whose political machinations and papal assassins may soon elevate him to Pope Borgia. Now Frank, along with Harry Lefferts and his infamous Wrecking Crew, must protect Pope Urban VII from all manner of treachery.

The Beast of Calatrava by Mark Teppo

After a battle left Ramiro Ibáñez de Tolosa¿s face terribly disfigured, the knight of the Order of Calatrava abandoned his sword for a pastoral existence. But his beastly appearance horrifies all those who cross his path - with the exception of his adoring and pregnant wife. Can he keep Louisa and their unborn child safe from the war that is coming to Iberia?

As Ramiro prepares for his child¿s birth, Brother Lazare of the Cistercian order searches for a means to inspire men as he travels with the crusading Templars. He seeks swords of legend - named blades carried by heroes of old - believing such symbols have the ability to rally men in a way no king could ever accomplish. But when he learns of the stories told of the mysterious monster that haunts the Iberian battlefields, he wonders what sort of power this new legend might contain - the legend of a man whose scarred face and cold demeanor cannot hide his heroic soul.