So the Washington Academy of Sciences has developed a seal of approval for SF novels that conform to scientific fact. This seems like a great idea since I love hard SF books, but I doubt many AH books are going to cross their path. Knowing history is not exactly a requisite to being a scientist. Maybe someone should come up with a seal of approval for how plausible an AH book is...

Sorry about not posting a review for Django Unchained last Friday. I worked some overtime that day so I couldn't put the finishing touches on it for publication. Don't worry, I should have it up next Friday. Meanwhile I have two more entries to post for the No Americans contest (still accepting submissions), plus you can also send submissions for the Balkanize Me contest and voting continues for the month of March (Steampunk is winning). More importantly, Amazing Stories has some big news to announce this week. Stay tuned.

You can't talk about steampunk these days without mentioning Cherie Priest. Although Paul Goat Allen at Barnes & Noble's site questions whether the glory days of steampunk days are over with the slew of cliched works recently published, he still holds out hope "as long as Cherie Priest continues writing her Clockwork Century novels." No pressure, Cherie.

Speaking of the Clockwork Century, Priest's novel Ganymede is being released in the UK and you can check out an extract and praise for the novel over Tor UK. Those who want to read an example of Priest's short fiction can read "Addison Howell and the Clockroach" at Lightspeed Magazine and also check out an interview with Priest over there as well where she talks about her short story, writing in the Pacific Northwest and her future plans.

Fans of Gail Carriger, author of the Parasol Protectorate series, have a lot to celebrate. Her novel Soulless  is being discussed at the io9 Book Club this month, so check it out and put in your two cents.

Speaking of io9, TONIGHT you can go over there and ask her anything from 6 pm to 7pm CST. Meanwhile, if you live in California want to learn more about Gail is doing, check out her recent journal post. She is going to be touring California to promote her new novel, Etiquette & Espionage (BTW, the first 3 chapters are available for free on Amazon), and even if you do not live in Cali, you still might get a chance to participate in an online video chat. 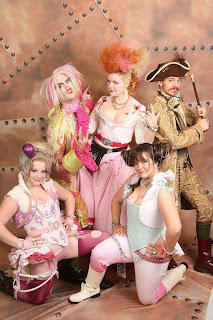 Okay it is safe to say I am a nerd, but I like to keep my fandom based on what I consume for entertainment. I am not judging those who like to cosplay, it is just not my cup of tea. I lack the patience or the finances necessary to really get the look like. Although steampunk is a literary movement, you cannot deny how important the aesthetic movement has become. Still the steampunk fanatics might have some competition from rococopunk.

The premise of rococopunk is that the rococo movement never ended. You can read more about it over at Steampunk R&D and see more pictures like the one above. The movement has been making some waves and was featured on io9. Do you think it will replace steampunk?

Bored with this reality? The Multiverse Transit Authority has a chronomatic raring and ready to take you to adventure:

May 24-26: Up in the Aether Steampunk Convention in Detroit, Michigan.

August 23-25: The stars are right for the HP Lovecraft NecronomiCon in Providence, Rhode Island.

Finally end your temporal adventure with a quick bite at the steampunk themed restaurant Boulton & Watt in NYC.

Really quick announcement...or two. Xchyler Publishing will be accepting submissions for their Spring Steampunk Anthology until January 31st. Meanwhile Dark Fiction Magazine is open for SF, fantasy and horror short story (1k-7k words) submissions until February 28.That is all. 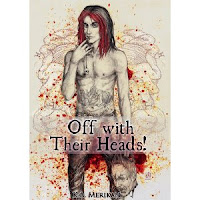 Monster Earth by various authors
Welcome to a world where the Cold War was fought not with the threat of nuclear destruction, but with Giant Monsters.

Off With Their Heads! by K.A. Merikan
It’s 1907, twenty years after the outbreak of a zombie Plague. For a young student of medicine like Clint, the undead bodies provide an opportunity to study human physiology in the working. He is a good young man: tidy, well-mannered and hard working. Focused on his goal to become an excellent surgeon, Clint has a bright future ahead of him. If it weren’t for a shameful secret he’s forced to keep, his life would have been perfect.

The Report by Timothy Digg
2013, the 60th Anniversary of Great Britain joining the Greater Reich and the Coronation of King Edward 11th. This is the background to a puzzling murder at the highest levels of the National Socialist Party of Great Britain. Detective General George Hayes is given the dubious job of finding who did it. But the reader knows exactly who did it, but not why and follows George Hayes in his quest to find out.

5 Insane 'What If' Scenarios That Almost Changed Everything by Jacopo della Quercia at Cracked.

Never Bet Against Theodore Roosevelt in a Knife Fight by Donald R. McClarey at DFW Catholic.

Don’t Cross the Streams by Steve DeWinter at Steamed!

Guest Post by Paul Levinson: The Plot to Save Socrates at Kathleen Valentine's Parlez Moi Blog.

Top 20 Best Speculative Fiction Novels of 2012 by Stephan at The Ranting Dragon.

What's going on with our Time Travel Anthology? at The Masquerade Crew.

The Cassandra Project by Jack McDevitt and Mike Resnick at Thinking about books.

Farthing by Jo Walton at Things mean a lot.

Kieron Gillen Explores The World Of Nazi Superhumans At Avatar by Wesley Messer at Comics Crux.

Con Men: Interview with the Co-Creator of Ultrasylvania at Project Million Entertainment.

Valjeanne Jeffers at The Chronicles of Harriet Tubman.

Brett Ratner to direct a time-travel show for ABC, present a vision of a Ratnerized tomorrow by Sean O'Neal at AV Club.

The Multiverse Presents Batman and Robin Parody ‘Knighthood and Decoy’ at Geek Syndicate.

Review of Elementary: Season 1, Episode 12 at Thinking about books.