The Anointed One by A.J. Nolte 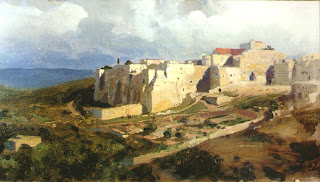 Captain Simon Diogenes glanced around him at the crowded docks. Jaffa was a busy port city even at the slowest of times, and with the death of the Emperor David I Agrippa, these were far from slow times.

Diogenes' glance flicked over the disembarking passengers, noting several barbarians from the European Mithraic states. After the most recent war against the Manicheans of the Byzantine Empire, in which Mithraist mercenaries from the Gothic and Frankish kingdoms of Europe had fought hard on both sides, it was common to see the big blond warriors throughout the Alexandrian Empire. Diogenes himself would trust an Axumite or Nubian a thousand times over one of those heathen barbarians, and indeed, he saw a fair number of both.

Most of the travelers, though, were men like Diogenes and their wives; loyal Alexandrians and circumcised followers of the one true God. He supposed that was true of the Axumites and Nubians as well, though he wondered, at times, just how deep their commitment to faith and empire really was. Diogenes saw a number of traveling rabbis, probably headed to the Counsel of the Imperial rabbinate to be held in a few months time.

The politically savvy soldier knew just how disturbed the religious authorities of the empire were about the heir apparent's decision to forego the traditional coronation in Bethlehem. After the conversion of the Roman Emperor Judas Constantinus to Judaism and his relocation of the capital to Alexandria, those sections of the Empire which held to other beliefs rebelled. This combined with the influx of barbarians into the empire led to the fall of Rome.

Alexandria, however, had not only survived and prospered, but united all of Egypt, most of the Levant and part of Syria, as well as the former Roman provinces of Africa, into a powerful new Jewish Empire. With the conversion of the kings of Axum and Nubia to Judaism, and their de facto absorption into the empire, it seemed as if God was finally fulfilling the promises he had made to the Children of Israel so long ago.

As a consequence, it had become customary for the emperor to be crowned by the Chief Rabbi at Bethlehem, in order to fulfill the current interpretation of prophecy which linked the Emperor with the anointed one of God, or messiah in old Hebrew. Not coincidentally, this also gave the rabbinate considerable power over the Emperor, which it was not loathed to use on occasion. But Eleazar II Agrippa, the son of the beloved and recently departed Emperor David, had announced his intention to be crowned in Alexandria, and, in his words, "to put the superstitious nonsense of the messiah behind us once and for all."

Certainly, there were factions within the rabbinate who agreed with Eleazar, but the consternation over the decision would almost certainly lead to yet another divisive counsel and considerable civil unrest whatever the rabbinate decided. Diogenes thought the young Emperor was a fool to pick this fight, but sometimes young men were like that.

"Your pardon, Captain." Simon looked down to see a man garbed as a scribe addressing him.

"I pray God that you can. I am Josephus of Cordoba, a scribe in service to Lord Thiudaric of that city." Simon nodded; the Mithraist lords of Europe, whose religion taught them to shun any "work but soldiering", often used Jews as administrators.”I was sent by my lord to deliver letters to the Emperor at his coronation in Bethlehem, and to serve as his ambassador to the Emperor once the coronation was finished. Now, however, I find that the coronation has been moved to Alexandria, and my wife is great with child. I fear she could not easily make the journey, and I would not depart until I have seen her safely settled."

Simon sighed; this man's small crisis was only one of the many things Eleazar's unexpected change of plans had set askew.

"Your difficulties are not unusual, sir. If I can help, I will. Do you have lodgings arranged in Bethlehem?"

"Not yet, Captain. I fear my wife cannot travel much beyond that city, however."

"Perhaps I can help, then," Simon said. "My men and I ride for Bethlehem shortly. We will find a litter for your wife, and you can ride with us to the city. I believe lodgings are to be had with ease, particularly with the Emperor's changed plans. Once your wife is settled, you can best determine how to travel on to Alexandria."

"God Bless you, Captain, and I must accept your kind offer." The two men clasped hands, and Simon wondered what he had gotten himself into.

The trip to Bethlehem was uneventful, and Josephus, as it turned out, made for very good company. The Cordoban Jew had seen a fair slice of the world, even traveling to the capital of the Byzantine Empire, and to Persia.

"Byzantium is no great city," Josephus told Diogenes. "The emperors have tried to make it a new Rome, and its defenses are quite formidable, but it is a cheerless city, and the Manichean priests see manifestations of evil everywhere."

Josephus sighed. "Alas, it has fallen on very hard times, and is little more than a ruin. The land has not recovered from the ravages of Vandals and Huns. Of the Mithraic lands... well, it would be best if I kept my own counsel I think." Still, for all his reluctance to speak of Cordoba, Simon learned a great deal from Josephus from what he did not say. The man was not surprised to see synagogues, but much more shocked to see faithful Jews baring weapons. Josephus' eyes also darted around furtively, as though he were constantly in fear of ambush. Clearly, life was far from easy for the Jews of Cordoba.

"We are approaching Bethlehem, Captain." Diogenes nodded to his soldier, and turned to Josephus.

"This was a bucolic little town once, but it has grown since. I doubt King David himself would recognize it." The town had become a small city, full of inns and shops, with a number of influential synagogues. None, of course, could compare to the rebuilt temple in Jerusalem, which was the heart of the rabbinate's power. Still, Bethlehem had become an important place in the empire, because of the coronations of so many emperors.

Josephus chuckled. "Do you know, Captain, I had a whimsical thought just now."

"Well, in the interpretations of prophecy common outside the empire, it is said that the anointed one, the messiah, will be born in Bethlehem, not crowned there. So if all goes as I think it might, some men might say my son is..."

"That is a whimsical thought best kept quiet, my friend," Simon interjected. "Neither the Chief Rabbi nor the Emperor would find it amusing. There have been pretenders advancing that claim before, zealots who have stirred up rebellions against what they see as imperial decadence."

"Yes, of course. I meant nothing by it, certainly."

"I know that, Josephus, but if your Miriam does give birth in Bethlehem, as seems likely, you had better let it be known your son was born somewhere else. What were you thinking of naming the lad, by the way?"

"Jesua, in the vulgar Latin of Hispania."

"A good strong name. That would be Yeshua in Aramaic?"

"Yes, though it is common for those of us living in the heathen west to make our names less… distinctive. My wife, for example, goes by Maria to the people of Thiudaric’s court."

"That is no bad thing, in this case. I think it best for you, and the boy, if Jesua of Cordoba is never associated with Yeshua, a boy born of Miriam in Bethlehem." Josephus nodded.

"Perhaps that would be best, for now. As for tomorrow, who can say what the future might hold?"

Simon Diogenes would have cause to remember those enigmatic words of the scribe Josephus, decades later, when the name of Jesua of Cordoba was spoken from far Britain to the east of Persia and the south of Nubia. And he wondered then what part he might have played, if any, in the messianic movement that forever changed the world three centuries after the fall of Rome.