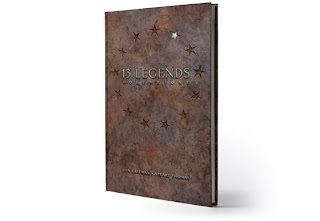 Found an interesting indie/alternate history comic book you guys should check out.  It is called  13 Legends  and it is written by Jon Eastman and Stuart Thomas, pencils by Gian Fernando, colors by David Ocampo and published by Frosty Ogre.

Here is the plot summary from Frosty Ogre's website:

A World Unlike Our Own

It's the late 1770s, but in this world, the industrial revolution has come hundreds of years early, and with it, war on a massive scale. Against a backdrop of secret societies, powerful cross-border industrialists, constantly shifting political alliances, and rediscovered supernatural realities, fully armed super-states carve up the globe, monarchs rule as despots, and the masses are powerless to forge their own destinies. But things are about to change...

A Story of Fate

Two young men have just completed their training at a state-sponsored military academy. Due to their superior intellects and uncanny skills, they've been selected for the honor of serving in one of the most prestigious elite units in the English Empire. They don't know it, but on the eve of their departure to fight for King and Country on the battlefields of the New World, they stand on the edge of destiny...

Their names are Arthur and Lancelot.

Currently Frosty Ogre is running a Kickstarter campaign to raise money for the comic and all supporters will get a hardback edition complete with various extras.  Those wishing to receive updates about 13 Legends can check out Frosty Ogre's Facebook page.
Posted by Mitro at 4:20 PM