One of our contributors, Korsgaard, shared a new blog with me called the Alternate History of the Space Race.  Written by David S. F. Portree, this blog imagines space missions that never were.  After reading it I started thinking about the Space Race from an alternate history perspective and how alternate historians have approached this competition for space between the United States and the Soviet Union.

To a nerd like me, there is something really exciting about the Space Race.  A program built off the remains of an evil empire that allowed adventurous explorers to strap themselves to an explosive pile of lowest bids for a potentially one-way ticket to the unknown.  All of this set during the back-drop of the Cold War, where two nations focused on attaining firsts in space exploration, which were seen as necessary for national security and symbolic of technological and ideological superiority.  Did the astronauts/cosmonauts in orbit ever fear that when they looked outside their windows they would see the cities of man blossom into nuclear flame?  What would happen to those in space when the world went mad?

Thankfully that never happened. The Soviet Union collapsed, but their existence and competition with the United States over space helped spark an unprecedented increase in spending on education and pure research, which accelerated scientific advancements that led to beneficial spin-off technologies. Counting all of that and a man landing on the moon (which some people still refuse to believe), is it possible that we could have done more?  Where are our cities in space?  Where are the colonies on Mars?  Where are the interstellar ships leaving to colonizing Earth-like worlds?  Where the hell is my jetpack?  Perhaps that is one of the reasons why so many people confuse 2001: A Space Odyssey as alternate history.  It represents that lost opportunity to accomplish something greater.

That is where alternate historians come in.  We are the men and women who can look back at history and see the divergence points necessary to make our science fiction dreams a reality.  Now we have all heard of some of the more the more well-known alternate histories of the Space Race, like Warren Ellis' Ministry of Space or Stephen Baxter's Voyager, but there are other alternate histories out there that cover an alternate Space Race.  An excellent short story I read last year during my honeymoon was Paul J. McAuley's Sidewise-nominated short story, A Very British History.  The story is actually a review of a fictional history book titled A Brief History of the Colonization of Space (Oxford 2001), which describes what happens after the British got to Peenemunde before the Russians or Americans.  You can find the full text of the story here. 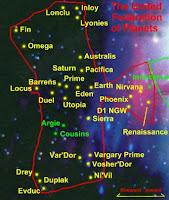 If you are looking for some original, online alternate history you should check out David Atwell's Human Timeline, an epic alternate history, with references to various sci-fi franchises, that once again features Britain getting a piece of the Peenemunde pie.  The point of divergence leads to a mutli-sided Space Race and takes the reader far into the future as humanity advances and interacts with other intelligent species.  I first read it back when I was a teenager and you can still find the entire series on Changing the Times.

That is why I am looking forward to reading and reviewing indie author Cliff Ball's new novel, New Frontier.  Here is a description of the novel:

In this speculative fiction novel, what-if Ronald Reagan became President in 1976 instead and the Space Race turned out differently? He continues with the moon landings, and declares that a moon base would be established by 1979, followed by a Mars Base by 1989. The Soviets decide to up the ante by building an interstellar starship, and send it on its way as the US establishes a permanent presence on the Moon. The US builds a space station, followed by a base on Mars, that will eventually be turned into a colony.

The rest of Earth follows the original timeline, so terrorism rears its ugly head, which will forever change American politics. Iran and its attempt at taking hostages is taken care of in 1979, but a new threat emerges because of it. The new POTUS has to pursue these enemies of the US to secure America's future. We follow America's progress from Moon to Mars, along with the Teacher in Space Program, to an eventual starship mission out of the solar system, which will continue in book two.

Even though the Space Race may be over and the Space Shuttles retired, do not lose hope about getting your very own asteroid retirement home.  Here are some upcoming events to look forward to by the end of the decade: