Review: "Japanese Military Strategy in the Pacific War: Was Defeat Inevitable" by James B. Wood 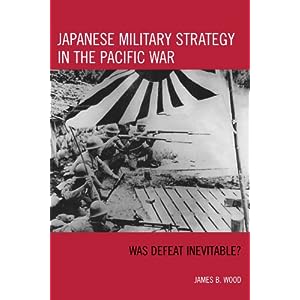 I believe this is a first for the AH Weekly Update insofar as this is the first review of a non-fiction alternate history book. Now, you may think: aren't those terms mutually exclusive by sheer definition? Yes, they usually are. However, Wood's book combines both traits as he first briefly analyzes various fields that influenced and guided Japanese strategy and plans during WWII, only to summarize counterfactual approaches which could have helped the Imperial Japanese forces in his final chapter.
It is of import to notice that all the counterfactual possibilities presented by Wood share one commonality, which is that they were choices that were actually recognized and advocated by ranking members of the Japanese military. They are, as such, not products of the author's mind and 20/20 hindsight.

Going chapter by chapter, Wood takes a look at Japan's preparations, at the reasons commonly attributed to the nation losing the war and what could have been changed, going from the preventable losses inflicted on its merchant marine, the mishandling of its potent submarine force, the naval leadership's fetish with wishing for a decisive battle and avoiding it at the same time (the Japanese plan for the Battle of Midway is such an example), the shortcomings of its air force and the mishandling of the war by the Japanese army.

Now, each of the factors Wood addresses are significant enough to warrant at least one book of their own. The internal fractures not only between the Army and Navy High Command, but between leading figures within each branch of the armed forces, already on their own deserve a thorough "What if?" treatment.

For example, did you know that Admiral Yamamoto actually threatened that he and the whole Navy staff would resign if his plan to attack Pearl Harbor was not adopted? Admiral Chuichi Nagumo, his superior, had favored an attack against the Malaya and Indonesia that would potentially have kept the USA out of the war a bit longer. Most other professional militaries would have called the bluff and sacked such an insubordinate subordinate. But Japan's command structure was so fractured, mired in political infighting, and fragile that this type of behavior became endemic.

Wood's book is not without problems, of which many can be directly connected to the book's short length. Each chapter is, at best, 15 pages long.

I will cite from a very good review on Amazon to specify them:

His critique of Japan's war effort fails to distinguish between strategic mistakes and defeat in battle. When the Japanese lose while pressing their initiative, they are guilty of systematic over-extension; when they lose on the defensive, they are guilty of conceding the fight to the enemy's terms. They are criticized simultaneously for failing to stick to their game plan and for failing to adapt to new situations. Apparently the Japanese can neither have their cake nor eat it.

Likewise, readers must go without a precise definition of the defeat in war that Japan is trying to avoid. Is any negotiated settlement that prevents occupation of the home islands better than a "defeat"? Wood seems content to see Japan lose all its conquests and all its continental holdings, avoid invasion, and call it a draw.

This brings me to the two decisive questions: is the book worth your while, and is it worth your money?
On the former point, the answer is a clear and endorsing "Yes". Yes, it is. It provides ample sources for its points and covers lots of ground, albeit in rather brief episodes. If there was nothing else, it would still serve as a good introductory read for all those interested in the problems (and chances!) of the Japanese military in the Pacific Campaign 1941-45.

The latter, sadly, is a "No". "Japanese Military Strategy in the Pacific War: Was Defeat Inevitable", discounting the chapter and final bibliographies, covers barely 115 pages worth of text and sells for more than $25 on Amazon at the moment. That is not a favorable ratio for the content that is provided, especially since Wood could easily have made his chapters twice as long. He certainly had enough material to work with for that.

As such, I can recommend "Japanese Military Strategy in the Pacific War: Was Defeat Inevitable" as a book you ought to get from your local library, or if you find it massively discounted from an online retailer. Spend the full price only if you're desperate.
* * *
War Blogger is the Internet handle of Sebastian P. Breit, author of the alternate history novel Wolf Hunt. You can find news, reviews, and commentary on all matters regarding WW2 on his blog, The War Blog, and follow his writing progress on his personal website.
Posted by Anonymous at 11:00 AM