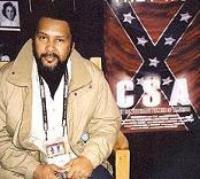 The Topeka and Shawnee County Public Library will be hosting “Off Screen: A Conversation with Director Kevin Willmott” Sunday, Oct. 23rd from 3:00 till 5:00pm in the Library's Marvin Auditorium.
In the alternate history community, Kevin is best known for the mockumentary C.S.A.: The Confederate States of America, in which the South won the Civil War and annexed the Union.  When asked about his film, Kevin had this to say:

For me doing my thing is telling the stories that I know Hollywood will not tell. My film, C.S.A: Confederate States of America is a good example of that. CSA has been very successful, but Hollywood would have never made that film. The film challenges those who still celebrate the virtues of the Confederacy to reconsider their position. As well, it is uncomfortable for African Americans and others because it touches the emotions of how we feel about the legacy of slavery.

Kevin grew up in Junction City wanting to make films. He attended Marymount College (Salina, KS), receiving his BA in drama. He returned home to work as a peace and civil rights activist, before heading off to New York to earn his MFA in dramatic writing. In 2010, Kevin was selected to receive a Kansas Governor’s Arts Award and was recognized at a ceremony in Topeka.

Kevin’s presentation at the library will encourage audience questions, interaction and engagement. It is part of the Hirschberg Lecture, which is designed to start a “community conversation.” This program is made possible by donations to the Jeanne and Cotter Hirschberg Lecture Series fund.
Posted by Mitro at 8:08 AM