Alternate History Weekly Update has over 50 Facebook fans now.  This is a great accomplishment for the blog and a step closer to my goal of 300 by June 19, 2012.  Furthermore, we got our first readers from Estonia and Moldova.  Welcome!

This week will be S. M. Stirling themed.  I will be reviewing his new novel The Tears of the Sun and I will posting an essay on the "ISOT" plot device popular in many published and online alternate histories.  Meanwhile, Teramis will be returning sometime late September with a new series of posts for you all to enjoy.

Just a warning to our fans, I am working on a new case and may not have the free time to post as often as I would like during the week.  I will do my best, however, to continue to provide you with top quality posts on alternate history.

New Releases: Lee at the Alamo 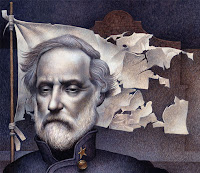 Lee at the Alamo by the master of alternate history himself, Harry Turtledove, was published on September 7th at Tor.com.  You can check it out here.   It is a work of alternate history, with the point of divergence in December 1860, when General David E. Twiggs is unable to take command of the Department of Texas, leaving Lt. Colonel Robert E. Lee as the commander. The story itself is set in February, 1861, just after Texas has voted to join the Confederate States. Lt. Colonel Lee concludes that it is his duty to defend U.S. munitions and property in San Antonio, Texas, including the fabled Alamo, rather than allow their surrender to the seceding Texas government, as Twiggs did do in OTL.

This is not the first time Turtledove has written about Lee from his point of view.  His famous 1992 novel The Guns of the South, involved a group of time-travelling Afrikaner Weerstandsbeweging members who supply Lee's Army of Northern Virginia with AK-47s and small amounts of other supplies (including nitroglycerine tablets for treating Lee's heart condition), leading to a Southern victory in the war. 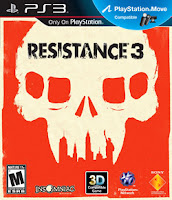 Resistance 3 was released last Tuesday.  The game is the third in the alternate history video game series, set in a world where the 1908 Tunguska event was the beginning of an alien invasion by the Chimera.  Other changes include a different end of World War I, leading to a prosperous European alliance and worldwide peace, preventing the Great Depression, the rise of the Nazis in Germany, and World War II, but also leading to the rise of an isolationist Russian Empire, one that is still under Tsarist rule as Lenin's revolution was crushed.  This isolated Russia battles the Chimera in secret, but fails to crush them and the Chimera invade Europe in 1949.  Most of the games are set in the 1950s, with Resistance 3 being set in 1957 after the Chimera have occupied the United States and wiped out 90% of the Earth's population.

Reviews of the game tend to be positive.  CBS News said "[t]he focus and intensity of Resistance 3 is what will solidify its place as one of PS3's top exclusive titles." CNET Reviews also gave the game 4 out of 5 stars.  Some, however, may not appreciate how long it takes to load and install the game.

Since I do not have Playstation 3, I will not be able to write a review myself.  If any my readers, however, have played the game, I would be more than willing to post your review.  Contact me at ahwupdate@gmail.com if you are interested.

Amy Waldman’s The Submission: Not a 9/11 Novel by Emily Witt at the New York Observer.

The 10 Best And Worst Alternative History Games by Dave Cook at Now Gamer.

Interview with S. M. Stirling at Grasping for the Wind

Steampunk trend barrels ahead at Dragon*Con by Karyn Lu at CNN.
Posted by Mitro at 11:00 AM

Email ThisBlogThis!Share to TwitterShare to FacebookShare to Pinterest
Labels: Harry Turtledove, Lee at the Alamo, Resistance 3