Alternate colonialism/imperialism scenarios are always a guilty pleasure of mine...and most alternate historians given how many of them I see every week. Still this one in particular was good enough that I had to showcase it on Map Monday: 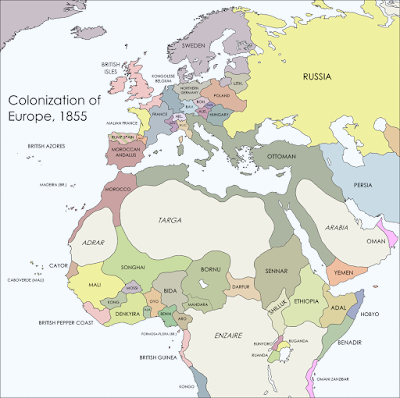 This is the "Colonization of Europe, 1855" by Falkanner. The timeline is admittedly a little implausible. The point of divergence appears to be that increased contact with Europeans leads to the African states actually modernizing instead of being torn apart by the slave trade. Meanwhile Europe is torn apart by religious wars and an increasingly militaristic Roman Catholic Church. In the chaos the Ottoman Empire, Morocco, Mali and the Kongo all gobble up parts of Europe.

Although I do find the idea of Africa countries modernizing so quickly and conquering parts of Europe to be the work of ASBs, I nevertheless still like the spirit of the idea. It is an ironic alternate history that can easily allow for some fun historical parallels. The map itself is also well done, with the soft colors that I like and the scenario leaves me interested in learning more about what happens next.

Honorable mentions this week go out to "American Britain, 1976" by shiftygiant and "Rebels and Draka" by RoyalPsycho.