Flag Friday is where I learn the most about obscure history. For example, did you know there was once a North Greenland? It was a colony of Denmark–Norway (later just Denmark) before being united with South Greenland. The important question is: how could you make an alternate history involving them? 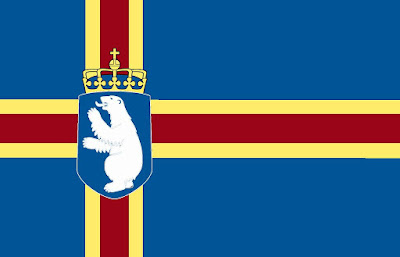 This is the "Flag of the Free Land of North Greenland" by trejiokla (or it could be "New Greenland", which was referenced in the file name). Since it was provided by trejiokla in the Request Maps/Flags Here thread when Peyton requested a flag for his "NS nation, Free Land of -North Greenland-, a Democratic Socialist Norwegian nation". I assume by "NS" that Peyton means NationStates.

I guess I could track down the imagined history behind this entity...but I prefer speculating on my own. A part of me likes to think that if Norway wasn't forced to leave its union with Denmark and instead did so voluntarily later on, it may have earned a part of Greenland. Then again it is the "Free Land" of North Greenland, so they probably didn't hold onto it for long in that timeline.

The flag itself, meanwhile, is a cool Nordic style flag and I like the use of polar bear. A cool flag for a cool part of the planet.