The World of Destroyermen (Plus A GIVEAWAY!) 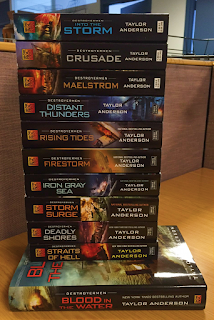 I love “what if.”  Not only is it the ultimate foundation of all fiction, it’s the prime mover behind every technological advancement in human history.  “What if I tie this sharp rock to the end of this stick?”  The spear, arrow, axe, grubbing hoe – virtually every early weapon and modern garden tool is born.  “What if we harness the power of the atom?”  Nuclear bombs and, incidentally, an efficient, relatively benign, and virtually inexhaustible energy source are created.   “What if I had a phone that would fit in my shirt pocket?”  Voila!  Cell phones allow instant communication and inescapable aggravation.  (One might consider that almost every “what if” inspired beneficial leap comes with a dark side).

“What if” is also a useful tool to the explorer and open-minded paleontologist, archeologist, and geologist.  Diabolical as it may seem to some purist historians, I propose that “what if” might even benefit them from time to time.  (Speaking as an historian myself, I can cite numerous examples of how that simple question has constructively redirected my own research on occasion).  And asking “what if” has certainly led to many of the stunning breakthroughs over the last generation regarding our understanding of the prehistoric world.  I still have a few of my childhood “dinosaur books” which depicted those fascinating creatures as bloated lizards with the reflexes of a sloth, stumping about, dragging their tails.  And they expressed no real theory at all as to why they “suddenly” went extinct.  Since then, (I won’t say how long ago), largely by pursuing ever-expanding networks of “what ifs,” dinosaurs and megafauna, even early man and ancient civilizations have been increasingly revealed to be infinitely more fascinating than we ever imagined.

Currently, the majority of paleontologists and geologists support the theory that, about 66 million years ago, something whacked our planet.  The jury remains out regarding what it was, (the level of certainty fluctuates and that’s NOT a bad thing), but whether it was a comet or an asteroid, a single strike or half a dozen, it was a hellova big punch.  The jury considering the immediate results remains out as well, with new evidence ranging from the awkward to the genuinely thought-provoking arising all the time.  Still, there’s no doubt our world has taken a number of serious cosmic beatings, all of which would’ve been unwelcome by its inhabitants. Therefore, regardless of whether it happened overnight or over millennia, or if a resultant global firestorm cooked most life, an ash cloud choked it out, or gradual climate change caused by a battered and wildly volcanic planet was ultimately to blame, my money’s on the Chicxulub impact either directly or indirectly knocking off most species on Earth.  And though I stand willing and happy to be convinced otherwise, I personally lean toward the gradual (likely more excruciating) process, with Chicxulub as the trigger.  But “what if” . . . whatever happened . . . never did?

That question opens a fantastically vast array of fictional possibilities to explore.  Since something certainly did happen in “our” universe, I was compelled to explore another possibility that seems to become more mainstream all the time; the theory that multiple, perhaps an infinite number of universes exist at the same time.  This is not a new concept and has been used in fiction for many decades, but most often it seems to focus on subtle differences, sometimes even difficult to detect.  I imagined that the farther back in history the “divergent event” occurred, the more profound the differences would be, and was drawn back to that cataclysmic event 66 million years ago as an obvious example, but I went a step beyond.

When the idea for the Destroyermen series popped in my head—on the movie set of the 2003 Alamo movie, oddly enough—I saw an opportunity to use hard history in a fanciful, exhilarating way.   I’d combine the “Alamo-like” ordeal of minor elements of the doomed U.S. Asiatic Fleet at the outbreak of WWII, already surrounded by the exotic, primordial setting of the Malay Barrier, with an alternate earth with momentous differences that only seem “subtle” at a glance.  There, I could incorporate many of the latest evolutionary and multi-universe theories that would be utterly unknown to the characters.  And these men and women would succeed or fail, in a radically revised world, based only on the character, equipment, attitudes, collective knowledge, and prevailing culture of early 1942.

Thus began Into the Storm, published in 2008.  It was followed by Crusade, Maelstrom, Distant Thunders, Rising Tides, Firestorm, Iron Gray Sea, Storm Surge, Deadly Shores, Straits of Hell, and now Blood in the Water.  Through all their adventures, the true heart of the ongoing series remains how they, the people, with their worldview, aboard a couple of dilapidated, battle-worn ships, cope with their situation and the beings they meet, (and how those beings cope with them). The result is a story possibly similar to others in some ways, (all novelists owe a debt to Homer), but also unique in other aspects which leave the characters--and hopefully readers--asking “what if” on every page.

And it’s not “just” a “dinosaur” story, or a “war” story, or any specific kind of story at all.  The best description I’ve come up with is “Alternate/Historical/Military/ Sci-Fi,” but even that’s not a perfect fit.  On the “Earth” where the crew of the old four-stacker destroyer Walker find themselves, the world doesn’t remain as it was when that massive celestial body passed it by; it continued to evolve as it would have – minus the impact.  The moon and tides move as they should and the stars remain unchanged.  Even the various continents have found themselves roughly where they ought to be, though water levels are different due to an altered climatic clock set in motion--or more precisely, left as it might have been.  There have been ice ages, droughts, and continental drift.  There have even been other “extinction events.”  Life has continued to evolve, but in an entirely different direction.  Mammals exist in places and climates they might be expected to since the dinosaurs have been beaten back just a bit, but the hot-blooded dinosaurs (I was a very early convert to THAT theory) continue to thrive, evolve and adapt to their environment as well.  Only a few creatures that had already achieved a virtually perfect form to take best advantage of their species’ “niche” have remained largely unchanged.  They may be bigger or smaller than their ancestors in the fossil record, but they still “do” what they did.

Through cooperative pack behavior, the “raptors” have risen to dominate many regions.  One “race” of these, the Grik, are particularly unpleasant.  But as the story unfolds, readers will discover that other races of “Grik-like” folk exist, with different temperaments and cultures, having experienced a diaspora similar to prehistoric humans.  This phenomenon was more limited across the vast, feral seas, which are a Darwinian delight of lethal adaptation.  Few creatures survived to drift across its reaches on logs, for example, so each land mass harbors wildly different life forms, isolated from others of their kind long enough to become vastly altered in many ways.

The “Lemurians,” or “Mi-Anaaka,” are relative latecomers--as were humans on this world. Possibly evolved from giant lemurs, they required an isolated land mass, such as Madagascar, on which to flourish.  Originally, as a more primitive species, they inhabited other places just as they did here.  One must sadly assume those outposts suffered extermination by earlier Grik incursions.  (Recently discovered specimens on “this” world have given rise to theories that modern lemurs and humans may have had a common ancestor!  I must admit considerable amusement concerning this post Into the Storm publication development, but I have valiantly resisted any claim of prescience.

Lemurian prehistory is similar to that of humans in some loose but very fundamental ways.  Look at the Epic of Gilgamesh and the Old Testament of the Bible.  Examine attributes of Celtic, Druidic, Norse, Ancient Greek, Native American, and many other religious and societal traditions, and you discover that many founding principles, myths and time-honored tales--regardless of inspiration--are universal among even the most isolated humans.  It’s therefore reasonable that almost any sentient, social species would incorporate at least vaguely familiar belief systems, devised to understand the natural world and create a functioning civilization.  A strong concept of right and wrong, for example, is essential to the maintenance of any society not ruled by fear.

For the Grik, this is not necessarily the case since the vast majority of them are arguably non-sentient . . . sort of.  Only a minority are self-aware in a manner humans--or Lemurians--would recognize, and there are reasons for that.  Those that are sentient do hold recognizable, precedented--if unappealing--belief systems.

As for the rest of the world, much remains unexplored--at least by the known characters in the tale.  It’s different, certainly, in thoughtful and sometimes unexpected ways.   It is not reasonable for readers to know much more about it than the characters do however, so I invite you to explore it with them.  I’m sure they’d appreciate the company.

Want to win all 11 books in the Destroyermen series? Enter below:

a Rafflecopter giveaway
Posted by Mitro at 11:00 AM