Book Review: Roland: Of Pirates and Patriots by Timothy Freriks 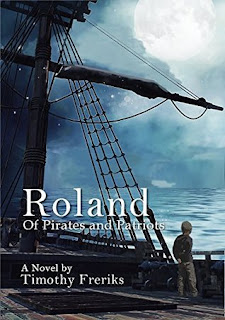 One of my patrons, Timothy Freriks, asked if I would take a look at this book: Roland: Of Pirates and Patriots. Although technically historical fiction and thus outside of the subject matter of this blog, I just couldn't say no to someone who helping me keep all of my alternate history projects afloat. So I decided to read and review Roland and see if it is worth checking out.

Roland is told from multiple perspectives, but focuses mostly on the adventures of young Roland Waterstreet (later Roland Whiting). When his father is killed in a brawl on the London dockside, he comes under the protection of his father's friend Captain Bigelow. Bigelow explains to Roland that he and his father were involved in a plot to steel gold raised in America to fund Napoleon. The gold, now safely hidden in a warehouse owned by Bigelow, is to be kept hidden until America could need it. After trusting Roland with this information he later dies when a storm sinks his ship.

Roland survives and is adopted by Paul Whiting, who Roland later entrusts with the secret of the gold. They come up with a plan to give the gold to Paul's pirate friend, Samir, in exchange for him stealing British ships full of military supplies to be used in America's defense...and with the War of 1812 on the horizon, Roland's patriotism may just be put to good use. Roland, however, is being hunted by John Robinson, Bigelow's former first mate, who knows about the gold and wants it for himself. His obsession for the gold means he will never stop hunting Roland and will throw every obstacle in Roland's path to stop him from using the gold as he sees fit.

Per the preface, Tim ensures us this story was based on true events, but does use fictional character. Sadly Google Fu was unable to help me find any mention of hidden treasure or references to anyone named Roland, but there is no reason to believe Tim is lying. At the very least he may have taken some creative liberties with his sources, so Roland straddles the line of historical fiction and secret history, but its definitely not alternate history.

Still Roland is certainly set in an interesting, if often overlooked, period of American history. The War of 1812 isn't covered extensively like other conflicts America was involved in (the Revolutionary War, the American Civil War and World War II), but it nevertheless is remembered for guaranteeing American independence. The fact that the United States didn't actually win the war is also downplayed in American history books, with focus shifting to the victories at Fort McHenry (where Francis Scott Key, who makes an appearance in Roland, was inspired to write what would become the national anthem) and New Orleans (the battle fought after the peace treaty had been signed, but did propel Andrew Jackson to national fame).

Tim definitely presents the events leading up to and during the War of 1812 from an American point of view. If you are American, this probably won't bother you, but readers from other cultures may be a bit put off. British readers may scoff at some of the characters claims that Britain wanted to annex the United States. Maybe this just could be written off as the fear and propaganda of the times, so of course the American characters would believe this, but my preliminary research can't really confirm any of this. Britain was at war with Napoleon when the war started and considered the conflict with the United States a distraction at best and wanted it to end as soon as possible. If anyone in the British government wanted to defeat and annex the former colonies, they were minority, since most either wanted a status quo peace or, at very least, redrawing some northern borders to their liking and setting up so Native American buffer states to slow down American westward expansion.

Canadians, meanwhile, would enjoy Roland even less. To be fair to Canada, the United States did invade them and there were plenty of people within the American government who saw the annexation of Canada as benefit for going to war with Britain, even if it wasn't the cause of the war. So Tim's portrayal of Americans being bullied by the mean British and the fighting Canada being dismissed as a distraction from Britain's true aims may not sit well with most Canadians. Lets not forget that Washington was sacked by the British in part because of what the Americans did to York (present-day Toronto).

Still that is history for you. Everyone can look at the same event and attach different emotions to it. Roland, nevertheless, still manages to be an interesting story even with its American bias. The style of the writing is a little old fashioned, but so was Napoleon in America and most of Harry Harrison's works, and I enjoyed all of them. It was fun to discover that some characters were real people who lived colorful lives.

If I had one major complaint with the book it was the relationships among the different characters. People formed connections rather quickly between each other with little to no build up. Part of the problem is that the book is rather short and easy to read in a few days. In my humble opinion, I think Tim should have spent a little more time showing us how characters became friends, family and lovers instead of just saying that they were. For example, instead of Paul telling Roland how he became friends with Samir, do a flashback and show Paul's first interactions with the Barbary pirate. It would have made Roland much more interesting.

That being said, Roland still gets a recommendation. While the characters relationships could have been more developed and it has a strong American bias, Roland still managed to keep me interested in an overlooked time period that nevertheless had an impact on my nation's identity. Check it out if you are a War of 1812 buff or just want to see pirates be patriotic for once.

Matt Mitrovich is the founder and editor of Alternate History Weekly Update, a blogger for Amazing Stories, a volunteer interviewer for SFFWorld and a Sidewise Awards for Alternate History judge. When not exploring alternate timelines he enjoys life with his beautiful wife Alana and prepares for the day when travel between parallel universes becomes a reality. You can follow him on Facebook, Twitter and YouTube. Learn how you can support his alternate history projects on Patreon.
Posted by Mitro at 11:01 AM

Email ThisBlogThis!Share to TwitterShare to FacebookShare to Pinterest
Labels: Book Review, Roland: Of Pirates and Patriots, Timothy Freriks, War of 1812