Map Monday: The Kingdom of the Isles by Doctor President

In many ways, Map Mondays is where I highlight all of my personal favorite alternate history scenarios. So here is another one captured by Doctor President called "The Kingdom of the Isles" (or "Konungsríkið Eyjar"): 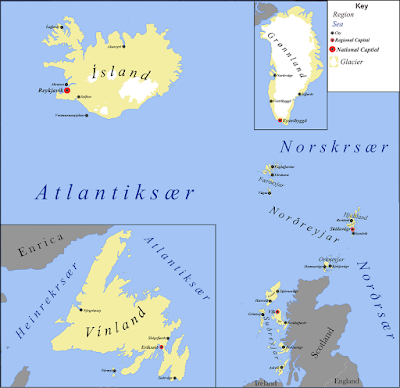 In this alternate history, our timeline's Kingdom of the Isles survives well into the present as a federation of five regions, commonly known as Eyar. Its not a major power, so kudos to Doctor President for not turning this into a wank. I do like, however, the idea of an Old Norse civilization surviving in the North Atlantic.

Plus there are little touches that speak of a larger world such as the nation of "Enrica" on continental North America. The map itself is minimalist, but still well done. You can see a full version in case you need a closer look at the place names. For a relatively new member to AlternateHistory.com, this is a fine start.

Honorable mention goes out to "The Austro-Hungarian Empire and its neighbours in 1806" by Ankh Von Hapsburg. For more mappy goodness, see Vintage News' profile on the mysterious phantom island of Irish mythology: Hy-Brasil.