When I was a lad, I read Back in the USSA by Kim Newman and Eugene Byrne. It was an alternate history/fictional mashup in the style of Kim's Anno Dracula series, but this time set in a world where the United States experienced a communist revolution, not Russia. I became obsessed afterwards with creating a "realistic" version of the story, one without all of the fictional characters and pop culture references. I never shared what I created (I'm assuming its somewhere on my hard drive), but the experience left me with a soft spot for early 20th century American socialist/communist states.

That's probably why I liked this flag of the Workers' Republic of Nebraska by Vizio: 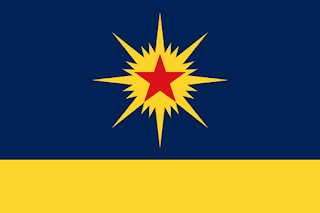 There really isn't much of story that goes with this flag, other then the alternate Nebraska being governed by "First Citizen Eric Hass". I was surprised to learn that Eric Hass is actually a real person and is best known for being the four-time Socialist Labor candidate for President of the United States. Although born in Nebraska, it looks like he spent a lot of time in New York and elsewhere in his adult life, so whatever point of divergence created this state couldn't have happened any later than the 1920s. My guess is we would be looking at a balkanized North America with a similar story to Crimson Skies the game. I would be curious to know what the rest of the country looks like, but such speculation isn't the purpose of Flag Friday.

Although you don't see many "workers' republic" flags that are not majority red, I still think the flag looks good with just a red star set in a sun (which I assume is rising). The yellow probably would stand for the bountiful harvest of the states and the blue would be the sky because I doubt this Nebraska would have access to the sea. Admittedly the dimensions seem a bit off, but I really do like this flag for the greater alternate history it seems to represent.

Honorable mention goes to "Reichskriegsflagge for the Australian Capital Territory" by LorisUmbrella. If you want more fun with flags (yes I just made a The Big Bang Theory reference) then I would check out this article where Western Sydney University examines Australians relationship with their flag.