Made to Kill: A Novel by Adam Christopher

It was just another Tuesday morning when she walked into the office--young, as I suspected they all might be, another dark brunette with some assistance and enough eye black to match up to Cleopatra. And who am I? I'm Ray, the world's last robot, famed and feared in equal measure, which suits me just fine--after all, the last place you'd expect to find Hollywood's best hit man is in the plain light of day.

Raymond Electromatic is good at his job, as good as he ever was at being a true Private Investigator, the lone employee of the Electromatic Detective Agency--except for Ada, office gal and super-computer, the constant voice in Ray's inner ear. Ray might have taken up a new line of work, but money is money, after all, and he was programmed to make a profit. Besides, with his twenty-four-hour memory-tape limits, he sure can keep a secret.

When a familiar-looking woman arrives at the agency wanting to hire Ray to find a missing movie star, he's inclined to tell her to take a hike. But she had the cold hard cash, a demand for total anonymity, and tendency to vanish on her own.

Plunged into a glittering world of fame, fortune, and secrecy, Ray uncovers a sinister plot that goes much deeper than the silver screen--and this robot is at the wrong place, at the wrong time.

Made to Kill is the thrilling new speculative noir from novelist and comic writer Adam Christopher.

If one must flirt...flirt with danger.

Lessons in the art of espionage aboard Mademoiselle Geraldine's floating dirigible have become tedious without Sophronia's sweet sootie Soap nearby. She would much rather be using her skills to thwart the dastardly Picklemen, yet her concerns about their wicked intentions are ignored, and now she's not sure whom to trust. What does the brusque werewolf dewan know? On whose side is the ever-stylish vampire Lord Akeldama? Only one thing is certain: a large-scale plot is under way, and when it comes to fruition, Sophronia must be ready to save her friends, her school, and all of London from disaster--in decidedly dramatic fashion, of course.

What will become of our proper young heroine when she puts her years of training to the test? Find out in this highly anticipated and thrilling conclusion to the New York Times bestselling Finishing School series!

Tales from the Loop by Simon Stålenhag 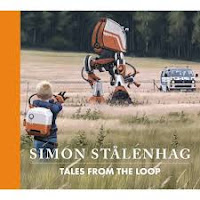 Simon Stålenhag’s Tales from the Loop is a wildly successful crowd-funded project that takes viewers on a surprising sci-fi journey through various country and city landscapes―from small towns in Sweden and the deserts of Nevada to the bitter chill of Siberia―where children explore and engage with abandoned robots, vehicles, and machinery large and small, while dinosaurs and other creatures wander our roads and fields. Stålenhag’s paintings and stories take place in an alternate version of Sweden in the ’80s and ’90s, primarily in the countryside of Mälaröarna, a string of islands just west of Stockholm, and how this reality came about: the development of the Loop, a large particle accelerator and the side effects of the massive project. These incredibly captivating works and accompanying text capture perhaps a not-too-distant reality that is both haunting and imminent: addressing the many ways developing technology and nature can create havoc and wonder in our world―plus, its impact on the next generation. This is the English edition of the first book in Swedish that sold out in its initial printing.

The eighth issue of the popular magazine of historical fiction and alternate history contains six great new short stories. Alt Hist Issue 8 includes new stories in the Battalion 202 series set in the aftermath of a successful German invasion of Britain, as well as tales featuring bridge burning in the American Civil War, a secret mission against the Suez Canal in the World War One, a story that speculates what if the atom bomb hadn’t been dropped on Japan, and taking us back to the Middle Ages, a story that follows the dreams and reality of a peasant girl caught up in the brutal Hundred Years War.

Surrounded by Enemies: A Breakpoint Novel by Bryce Zabel

What if Kennedy survived Dallas?

President John F. Kennedy has lived through the ambush in Dealey Plaza. America holds its collective breath, seeing its president nearly executed in broad daylight. But as the country marches on, the office of the President finds itself under a much more insidious type of fire. Political scandal, an endless war, and a country coming apart at the seams take the 1960’s in a terrifying new direction, and both John and his attorney-general brother, Bobby, struggle to stay ahead of their enemies, political and otherwise, and steer America toward a greater future.

Bryce Zabel is a master of the cover-up and the conspiracy, creating the Emmy-award winning series DARK SKIES. SURROUNDED BY ENEMIES is the first novel in the new Breakpoint series—each book exploring seminal moments in popular history and taking readers on a journey into a mirror world where events are both unexpected yet startlingly believable.

This savvy, fiercely intelligent novel, perfect for readers of Harry Turtledove, brings together elements of political thriller and page-turning history, enthralling readers with a sharply written take on the America that was, and the America that could have been.

WINNER OF THE 2013 SIDEWISE AWARD FOR ALTERNATE HISTORY

Time travel. Humanity has long imagined what it would be like to be able to create a time machine, what we might see if we could travel into the future, or be transported to the distant past. And what if it were possible to travel into our own, more recent past? Would we be able to change our present, or are we prisoners of predestination? Is fate what we make of it?

In this latest title in the acclaimed 'Future Chronicles' series of speculative fiction anthologies, fourteen authors confront the question of time travel and its consequences, exploring a landscape where past, present and future all become imaginable destinations.