Boston, 1770: The city is a powder keg as tensions between would-be rebels and loyalist torries approach a breaking point and one man is willing to light the match that sets everything off to ensure that he has his revenge.

The presence of the British Regulars has made thieftaking a hard business to be in and the jobs that are available are reserved for Sephira Pryce. Ethan Kaille has to resort to taking on jobs that he would otherwise pass up, namely protecting the shops of Torries from Patriot mobs. But, when one British loyalist takes things too far and accidentally kills a young boy, even Ethan reconsiders his line of work. Even more troubling is that instances of violence in the city are increasing, and Ethan often finds himself at the center of the trouble.

Once Ethan realizes why he is at the center of all the violence, he finds out that some enemies don't stay buried and will stop at nothing to ruin Ethan's life. Even if that means costing the lives of everyone in Boston, including the people that Ethan loves most.

The Madagaskar Plan by Guy Saville

1953. Britain and her Empire are diminished. Nazi Germany controls Europe and a vast African territory. There has been no Holocaust. Instead, the Jews have been exiled to Madagaskar, a tropical ghetto ruled by the SS. Returning home after a disastrous mission to Africa, ex-mercenary Burton Cole finds his lover has disappeared. Desperate to discover her, he is drawn into a conspiracy that will lead him back to the Dark Continent. Meanwhile Walter Hochburg, Nazi Governor of Kongo, has turned his attention to Madagaskar. Among the prisoners are scientists who could develop him a weapon of unimaginable power. But Hochburg is not the only one interested in Madagaskar. The British plan to destroy its naval base to bring America into a war against the Reich. They have found the ideal man for the task: Reuben Salois, the only Jew to have escaped the ghetto. The only one brave, or foolhardy, enough to return. These three men will converge on Madagaskar. The fate of the world is in their hands...Drawing on the Nazis' original plans for the Jews, Guy Saville has meticulously imagined a world-that-nearly-was to tell an epic tale of love, revenge and survival. 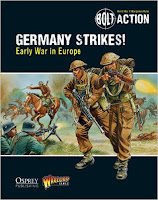 In 1939, Germany shattered the peace of Europe with a lightning-quick strike against Poland. The next year, it captured Denmark and Norway, before launching its famous blitzkrieg against France, Belgium and The Netherlands.  In less than two years of fighting, Nazi Germany had become the master of mainland Europe.

This new theater book for Bolt Action allows players to command armies of Germany tanks in WWII driving across the lowlands or to lead the desperate defense of the outgunned allied armies.

The United States government has flatly denied the existence of undead combatants on the battlefield for years. But thanks to numerous "Freedom of Information Act" requests, we can finally share these tales of guts and glory with you. From the bloody Bay of Pigs invasion to the mountains of Afghanistan, FUBAR presents a dirty dozen of the most highly classified missions of all time.

You will never read Denny Younger’s name in any history book, but the world as you know it wouldn’t be the same without him. Denny was born into one of the lowest rungs of society, but his bleak fortunes changed the day the mysterious Upjohn Institute recruited him. The role: “verifier of personal histories.” The job title: Rewinder. After accepting the offer, Denny discovers he’ll have to do his research in person…by traveling through time.

Using a device capable of opening a portal into any era from the past, Denny is sent back to serve as an eyewitness to significant moments in human history. But as he journeys across the centuries, he begins to suspect that his missions to “observe and report” have a much darker purpose. When a time jump drops Denny into the midst of a rebellion, he finds himself in over his head in a deadly game where even the smallest choices can have catastrophic consequences.

Armed only with his wits and his time-travel device, Denny’s adventures take readers on a pulse-pounding journey of page-turning twists. But will everything he’s got be enough?

[Editor's Note: Check out my review of the novel here.]

Sir Thomas Devere and Eleanor Hadrian have loved each other most of their lives—but sometimes love doesn't conquer all.

Their chance at happiness was ruined by Tom's hasty marriage to someone else. Heartbroken, Nell left home, finding a new life as a teacher at a school for the blind. But when one of her supernaturally gifted students, Charlie, is kidnapped, Tom reappears and her worlds collide.

Tom claims he hasn't seen his wife since the day of their marriage…yet he fears the missing student could be his son.

The deeper they dig, the more Tom and Nell discover: a deadly alchemist, more missing gifted children and long-suppressed feelings neither of them is ready for. A race on airship across England and India may lead them to answers—including a second chance at love—but only if all of British Society isn't destroyed first.