This fascinating third volume in the Britannia's Fist series will have you pondering how easily history could have been swayed differently.

Peter G. Tsouras presents the third installment in his Britannia’s Fist alternate history series. The winter of 1863 had rung down a white curtain on the desperate struggle for North America. The United States and Great Britain had fought each other to a bitter draw. On both sides of the Atlantic the forges of war glowed as they poured out the new technologies of war. British and French aid transformed the ragged Confederate armies and filled them with new confidence. Both sides strained to be ready for the coming campaign season. Both sides seek to anticipate each other.

The British strike suddenly at Hooker’s strung out army in winter quarters in upstate New York in a brutal swirling late battle across frozen fields and streams. Besieged Portland shudders relentless assault. The French attack Fort Hudson on the Mississippi. At Lincoln’s direction, two great raids are launched at the United Kingdom itself as Russia enters the war on the side of the Union to raid the Irish Sea. These are only preliminaries to the great gathering of modernized armies and ironclad fleets and with them are deadly submersibles and balloons. Battle rages from Maine to northern Virginia and the Chesapeake Bay, down to steamy Louisiana. And far away across the sea Dublin stands siege as Russia cast eyes upon Constantinople. For Americans, blue and gray, Britons, Irish, Frenchmen, and Russians, the summer of 1864 is the crescendo battle of destinies and dreams.

Elaine and Johan are preparing to leave Golden City, with Daria and the travellers, in order to search for the Witch-King. The Grand Sorceress instructs Inquisitor Cass to help them. But before Elaine can leave she is arrested by two Inquisitors on the orders of the Emperor. When she resists she is hit with a powerful spell that forces her to concentrate all her efforts on protecting her mind from its intrusion. Taken to the palace she finds that the Grand Sorceress has been removed and the Throne has accepted an heir to the Empire. Realising this has to be the work of the Witch-King, Elaine must defeat the spell that is eating away at her defences if she is to escape and destroy him. Meanwhile, Johan, Daria and Cass are trying to find a way to get to Elaine and break her out of the cell in which she is being held.

The Golden City is still widely devastated from the disastrous battle for power that followed the death of the previous Grand Sorcerer. The recent escalating breakdown of social order can only be made worse by the return of an Emperor and the imposition of martial law. The Privy Councillors and Heads of the Great Houses succumb to the power of the new Emperor, as he amasses a huge army. It is up to Elaine and her friends, with some unexpected help, to prevent an all-out war.

The third instalment in the Bookworm series, The Best Laid Plans follows on immediately from the events in The Very Ugly Duckling, with Elaine and Johan joined by other favourite characters as they try to track down the Witch-King.

For the Good of the Confederacy by John R. Stuart 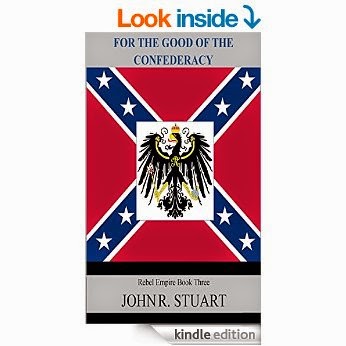 For the Good of the Confederacy is the third book in the REBEL EMPIRE series.

The Union lost the American Civil War in 1863 after the climactic battle of Serpents Mounds and the by the year 1900 the Confederate States of America has become a World power. Having defeated the British Army in Canada the Confederacy now rules most of North America. Now allied with France, the United Germanic Empire and the Empire of Japan the Confederacy has been fighting an all out war with the armies of Britain in both Europe and the Orient.

FOR THE GOOD OF THE CONFEDERACY continues the exploits of Confederate agent provocateur - Black Judah Lee as he searches for his nemesis - the deadly Mountie Robert Thornton. In a tale of revenge and war that sweeps from the jungles of the Orient to battlefields of France, Lee continues to leave a wake of death and bloodshed behind him. 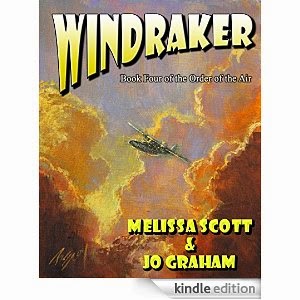 It’s the summer of 1935, and Gilchrist Aviation’s owner Alma Gilchrist Segura has brokered a deal that will take herself and fellow pilots Lewis Segura and Mitchell Sorley to Honolulu to test a new seaplane. It pays well enough to take their families along for a working vacation – including the children of the company’s part time handyman, whose father has abandoned them. Better still, archeologist Jerry Ballard is already there supervising a dig investigating whether Hawaii was actually discovered by the Chinese. It’s a crackpot idea, but it’s his only chance to prove that he can still handle field work after losing his leg at the end of the Great War, and he’s determined to restart his career.

However, not all is as it seems. The dig is funded by anonymous sources who seem to have far too much influence on its management, including the hiring of German archaeologist Willi Radke, and who seem to know exactly what they want to find. The seaplane's testing is plagued by mysterious mechanical problems – and rumors of a curse spread through the hangar. Can you murder someone by magic? And who would want to kill a middle aged Army officer who belongs to an allied lodge? Alma, Jerry, Mitch, Lewis and Stasi are determined to defend themselves, but the power arrayed against them is greater than they imagined. It will take everything they have – as flyers, scholars, and magicians – to survive this deadly paradise.