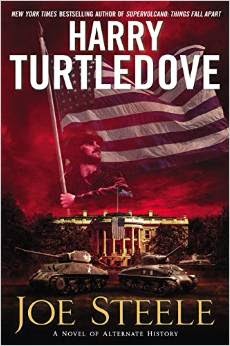 The good folks at Roc were kind enough to send me a review copy of Harry Turtledove's new novel Joe Steele. Originally based off a short story by the same name (you can check out a review of the audio version of that story here), Joe Steele is an alternate history where the man who would become Stalin is instead elected president of the United States. Here is the description from the press release:

Called “the maven of alternate history” by the San Diego Union-Tribune, Harry Turtledove returns to the scene with JOE STEELE (Roc Hardcover; $27.95; April 7, 2015), a fantastic reimagining of what America would have been like if we had elected a man akin to Stalin in 1932.

President Herbert Hoover has failed America. The Great Depression that rose from the ashes of the 1929 stock market crash still casts its dark shadow over the country. Despairing and desperate, the American people hope one of the potential Democratic candidates—New York governor Franklin D. Roosevelt and California congressman Joe Steele—can get the nation on the road to recovery.

But fate snatches away one hope when a mansion fire claims the life of Roosevelt, leaving the Democratic party little choice but to nominate Steele, the son of a Russian immigrant laborer who identifies more with the common man than with the wealthy power brokers in Washington.

In JOE STEELE, Turtledove envisions the election of a United State President whose political power will redefine what the nation is—and what it means to be American…

I can't begin to tell you how excited I am to review Joe Steele. Turtledove is the author who got me interested in alternate history in the first place and I have been looking forward to reading this expanded story since it was announced. Expect to see the review either here or on Amazing Stories.