1636: The Devil's Opera by Eric Flint and David Carrico

Eric Flint and David Carrico serve up the latest entry in the best-selling alternate history saga of them all, the Ring of Fire!

It is the year 1636. The United States of Europe, the new nation formed by an alliance between the Swedish king Gustavus Adolphus and the West Virginians hurled back in time by a cosmic accident, is on the verge of civil war.  His brain injured in the war with Poland, the USE's emperor Gustavus Adolphus is no longer in command. Enter Swedish chancellor Oxenstierna, a leader of aristocratic reaction against democracy.  His goal:  to assemble the forces of the hidebound ruling class in Berlin and drown the revolution in a bloodbath.

In Magdeburg, the capital of the USE, Mike Stearns' wife Rebecca Abrabanel is organizing popular resistance to Oxenstierna's plot. As part of the resistance, the American musician Marla Linder and her company of down-time musical partners are staging an opera that will celebrate the struggle against oppression. Princess Kristina, the heir to the USE's throne, is now residing in Magdeburg and is giving them her support and encouragement.

But another plot is underway--this one right in the heart of the capital itself, and with murder as its method. The only people standing in the way are a crippled boy and the boxing champion who befriended him, and an unlikely pair of policemen. Can the American detective Byron Chieske and his down-timer partner Gotthilf Hoch thwart the killers before they succeed in their goal?

R. S. Belcher’s debut novel, The Six-Gun Tarot, was enthusiastically greeted by critics and readers, who praised its wildly inventive mixture of dark fantasy, steampunk, and the Wild West. Now Belcher returns to Golgotha, Nevada, a bustling frontier town that hides more than its fair share of unnatural secrets.

1870. A haven for the blessed and the damned, including a fallen angel, a mad scientist, a pirate queen, and a deputy who is kin to coyotes, Golgotha has come through many nightmarish trials, but now an army of thirty-two outlaws, lunatics, serial killers, and cannibals are converging on the town, drawn by a grisly relic that dates back to the Donner Party…and the dawn of humanity.

Sheriff Jon Highfather and his deputies already have their hands full dealing with train robbers, a mysterious series of brutal murders, and the usual outbreaks of weirdness.  But with thirty-two of the most vicious killers on Earth riding into Golgotha in just a few day’s time, the town and its people will be tested as never before—and some of them will never be the same.

The Shotgun Arcana is even more spectacularly ambitious and imaginative than The Six-Gun Tarot, and confirms R. S. Belcher’s status as a rising star. 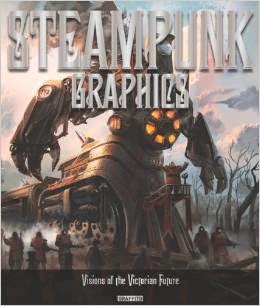 Paradoxically, the astonishing flights of imagination resulting in the most memorable images of the steampunk movement have only been possible due to the advances in digital design packages of the last few years. The astonishing, mind-warping work of 30 of the best of these steampunk artists is featured, including Kevin Mowrer, Guillaume Dubois, Kazuhiko Nakamura, and Collette Ellis. Each has created a distinct series of worlds and aesthetics inspired by different aspects of the genre. An extended essay traces the source and development of steampunk imagery, while detailed biographies of each artist reveals their history and inspirations. For anyone into steampunk, professional or aficionado, this is a must-have volume, while the stunning quality of the images will also bring a new crowd of adherents to the genre.

The Steampunk User's Manual: An Illustrated Practical and Whimsical Guide to Creating Retro-futurist Dreams by Jeff VanderMeer and Desirina Boskovich

Steampunk, the retro-futuristic cultural movement, has become a substantial and permanent genre in the worlds of fantasy and science fiction. A large part of its appeal is that, at its core, Steampunk is about doing it yourself: building on the past while also innovating and creating something original. VanderMeer’s latest book offers practical and inspirational guidance for readers to find their individual path into this realm. Including sections on art, fashion, architecture, crafts, music, performance, and storytelling, The Steampunk User’s Manual provides a conceptual how-to guide that motivates and awes both the armchair enthusiast and the committed creator. Examples range from the utterly doable to the completely over-the-top, encouraging participation and imagination at all levels.

Darwin, the educated ape, sets off on another madcap adventure through time, space, and chickens

Robert Rankin, the master of far-fetched fiction presents for the first time a book written in "the first monkey." Sure to be taken up as the newest of literary fads, Darwin, the educated ape here tells his life story to his legions of fans. Featuring chickens, Martians, doodlebugs, the far future, the distant past, Sherlock Holmes, Winston Churchill, dynamite, more monkeys than you can shake a stick at, barmen, pubs, the end of the world, and more, this is the fourth in Robert Rankin's series of steampunk-tinged Victoriana novels featuring the master detective Cameron Bell and his companion Darwin, the educated ape. This is another masterpiece of comic fiction and SF.

Loyally accompanying a mysterious knife-wielding gentleman named Jack on his midnight rounds through the murky streets of London, good dog Snuff is busy helping his master collect the grisly ingredients needed for an unearthly rite that will take place not long after the death of the moon. But Snuff and his master are not alone. All manner of participants, both human and not, are gathering with their ancient tools and their animal familiars in preparation for the dread night. It is brave, devoted Snuff who must calculate the patterns of the Game and keep track of the Players—the witch, the mad monk, the vengeful vicar, the Count who sleeps by day, the Good Doctor and the hulking Experiment Man he fashioned from human body parts, and a wild-card American named Larry Talbot—all the while keeping Things at bay and staying a leap ahead of the Great Detective, who knows quite a bit more than he lets on.

Boldly original and wildly entertaining, A Night in the Lonesome October is a darkly sparkling gem, an amalgam of horror, humor, mystery, and fantasy. First published in 1993, it was Zelazny’s last book prior to his untimely death. Many consider it the best of the fantasy master’s novels. It has inspired many fans to read it every year in October, a chapter a day, and served as inspiration for Neil Gaiman’s brilliant story “Only the End of the World Again.”

The idea of time travel has been with us since ancient times; now, the concept of time travel seems almost... plausible. Today, tales of chrononauts are more imaginative and thought-provoking than ever before: new views, cutting-edge concepts, radical notions of paradox and possibility - state-of-the-art speculative stories collected from those written in the twenty-first century. Forward to the past, back to the future - get ready for a fascinating trip!

Two Hundred and Twenty-One Baker Streets: An Anthology of Holmesian Tales Across Time and Space edited by David Thomas Moore

The world's most famous detective, as you’ve never seen him before! This is a collection of orginal short stories finding Holmes and Watson in times and places you would never have expected!

A dozen established and up-and-coming authors invite you to view Doyle’s greatest creation through a decidedly cracked lens. 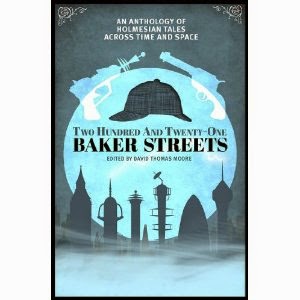 Read about Holmes and Watson through time and space, as they tackle a witch-trial in seventeenthcentury Scotland, bandy words with Andy Warhol in 1970s New York, travel the Wild Frontier in the Old West, solve future crimes in a world of robots and even cross paths with a young Elvis Presley...

What Ho, Automata by Chris Dolley

"A fun blend of P.G. Wodehouse, steampunk and a touch of Sherlock Holmes. Dolley is a master at capturing and blending all these elements. More than fascinating, this work is also rip-roaring fun!" - SF Revu

It's 1903. An augmented Queen Victoria sits on the throne. Automata are a common sight below stairs. And all that stands between the Empire and a touch of unpleasantness is Reginald Worcester, gentleman's consulting detective, and his automaton valet Reeves.

This book contains four adventures - a short novel, two novellas and the novelette that started it all - the WSFA Award finalist, What Ho, Automaton!

What Ho, Automaton!
Something Rummy This Way Comes
Reggiecide
The Aunt Paradox

Immerse yourself in mysteries that only a detective with a rare brain - and Reggie's is amongst the rarest - could possibly solve. Missing debs, stolen time machines, re-animated regicides, and Promethean pigs. But can Reggie save the day and remain single? And can the giant steam-powered brain of Reeves, his valet, continue to curb the young master's excessive flights of fancy?

"Dolley got me to laugh out loud near the end. Which, frankly, is VERY hard to do. Dolley's tone is spot on Wodehouse and the steampunk elements tie into both plot and silliness admirably." - Gail Carriger, author of Soulless