Preview: Then Will The Great Ocean Wash Deep Above by Ian Sales 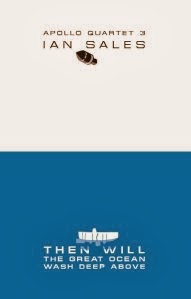 Friend of The Update, Ian Sales, was kind enough to offer me a copy of the third entry in the Apollo Quartet, "Then Will The Great Ocean Wash Deep Above". For those who don't know, the first entry, "Adrift on the Sea of Rains" won the 2012 British Science Fiction Association Award and was nominated for the 2012 Sidewise Awards. I also thought the sequel, "The Eye with Which the Universe Beholds Itself" was pretty good as well.

Here is the description of the story from the press release:


In 1951, General MacArthur launches a series of offensives against the North Korean and Chinese armies, and pushes them across the border into China. The Soviets enter the war, and fighting intensifies. By 1957, when Sputnik is launched, there is still no end in sight to the Korean War. So when NASA is formed in 1958 and astronauts are needed to counter the USSR’s space programme, the US Administration looks to arctic explorers, mountain climbers and other adventurous non-military personnel as candidates.

When women pilots prove to be better qualified – both medically and in terms of the necessary skills – President Eisenhower reluctantly agrees to allow thirteen women to become the USA’s first astronauts. As the Korean War continues through the 1950s and 1960s, members of the “Mercury 13” become the first American into space, the first American to spacewalk, and even seem likely to be the first to meet President Kennedy’s 1961 commitment of “landing an American on the Moon and returning them safely to the earth” by the end of the decade.

In 1969, a mission to effect repairs on a KH-9 HEXAGON spy satellite in orbit causes one of the film “buckets” to eject. These are designed to re-enter, and then be retrieved in mid-air by USAF aircraft equipped with a special hook. But a hastily-launched aircraft fails to make it in time, and the bucket lands in the Atlantic Ocean and sinks 15,000 feet to the floor of the Puerto Rico Trench. There is only one vessel in the world capable of retrieving the bucket: the US Navy’s DSV-1 Trieste II.

This is not the world we know.

The story looks to be more pure alternate history then the last two stories which featured time travel and alien technology respectively. I will let you know how it holds up when I post my review in the near future. In the meantime, you will be able to pick up your copy sometime this month.