Weekly Update #240: What We Know So Far About The Man in the High Castle Season 2

I am back from my short blogging break and I am looking forward to getting back into my routine. Besides all of my usual posts, I will also be reviewing the remaining Sidewise nominees I haven't gotten to yet. Plus I am working on a video regarding the history of the Sidewise Awards, so stay tuned for that.

The big news last week for alternate historians was the promos released by Amazon for Season 2 of The Man in the High Castle at San Diego Comic Con. Based on the book of the same name by Phillip K. Dick, Season 2 will feature new characters, an attempted coup in Berlin and a Cold War between Nazi Germany and Japan. I was surprised to learn that we would meet the actual "man in the high castle" since I assumed the twist from last year was that Hitler was that character, playing off the resistance and his own intelligence services to ensure that all copies of the film are either destroyed or come to him, but I guess not.

Still I am looking forward to the return of the show and if you want to see more, check out this clip from the show with an intro from Ridley Scott (who looks to be reading from a cue card):


After watching this scene, it appears Juliana saw the man in the high castle and now the resistance is planning to kill her for this. It looks like she will get away, but why is it so important for her to die because of this?

You should also check out the trailer, which gives even more details.:


Friend of the blog, Rvbomally, actually captured a screen shot of a map of the Americas from the trailer. Check it out below: 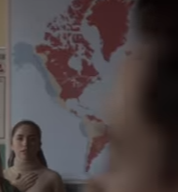 Although the image isn't great, you can see that the United States wasn't the only place partitioned by the Axis, but there are other neutral areas, like Mexico and the Amazon (are the Axis powers inadvertently environmentalists in this timeline?). Well at least we know what happened to Canada in this timeline.

Among other things, we also learned about a new character Nicole Becker, a Berlin-born filmmaker played by Bella Heathcote. She is a young filmmaker who has only known a world ruled by the Axis, but she is somewhat of a rebel (as much as you can be in that society) and doesn't always agree with the party line. This seems to suggest that the younger generation is starting to rebel at against the Nazi system, but I could just be reading too much into it myself.

Stay tuned to The Update for more The Man in the High Castle new.