Preview: A Kill in the Morning by Graeme Shimmin 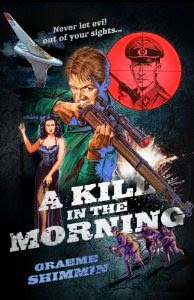 I got a new book to review. It is titled A Kill in the Morning by Graeme Shimmin. Check out the description from Amazon:

'I don't like killing, but I'm good at it. Murder isn't so bad from a distance, just shapes popping up in my scope. Close-up work though - a garrotte around a target's neck or a knife in their heart - it's not for me. Too much empathy, that's my problem. Usually. But not today. Today is different . . . '

The year is 1955 and something is very wrong with the world. It is fourteen years since Churchill died and the Second World War ended. In occupied Europe, Britain fights a cold war against a nuclear-armed Nazi Germany.

In Berlin the Gestapo is on the trail of a beautiful young resistance fighter, and the head of the SS is plotting to dispose of an ailing Adolf Hitler and restart the war against Britain and her empire. Meanwhile, in a secret bunker hidden deep beneath the German countryside, scientists are experimenting with a force far beyond their understanding.

Into this arena steps a nameless British assassin, on the run from a sinister cabal within his own government, and planning a private war against the Nazis. And now the fate of the world rests on a single kill in the morning . . .

I also got this handy-dandy author bio from Graeme:

Graeme Shimmin was born in Manchester, UK and studied Physics at Durham University.

His successful consultancy career enabled him to retire at 35 to an island off Donegal, Ireland and start writing. He has since returned to Manchester and completed an MA in Creative Writing.

The inspiration for A Kill in the Morning - his prizewinning first novel - came from Robert Harris' alternate history novel, Fatherland, and a passion for classic spy fiction.

To find out more, and read his spy-themed short stories and book and movie reviews, visit his website.

So stay tuned for either a review here or at Amazing Stories.

Email ThisBlogThis!Share to TwitterShare to FacebookShare to Pinterest
Labels: A Kill in the Morning, Graeme Shimmin, Preview, World War II